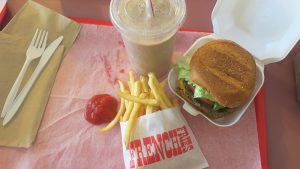 Hart played for the Mr. K’s t-ball team as a kid, and still visits the classic burger joint as an adult. Kristen Wile/UP

Folks in the restaurant industry know good food, so we want to know where they eat when they’re outside of their restaurants. In this series, we ask a member of the culinary industry to share their favorite local restaurants (not including their own) and what they order. Sam Hart, who spent time in Michelin-starred Chicago restaurants before moving back to Charlotte to open Counter- in West Charlotte, enjoys a wide variety of cuisines around town. Here’s where you can most often find him dining.

Leah and Louise, Camp North End
Greg and Subrina Collier marry the flavors of their Memphis upbringings with local produce
Hart’s order: Everything on the menu!

Pho Hoa, East Charlotte
A Vietnamese restaurant known for consistency and flavor
Hart’s order: Tripe and beef pho with plenty of chili sauce and a durian smoothie
Pro tip: “Be adventurous,” Hart says. “You’ll never know your favorite foods and dishes until you try them. I had a chef who took me to a dim sum restaurant in Chicago, and I was petrified. Never had real Chinese food. But after that my life and palate were forever changed. Push yourself.”

Maharani Indian Cuisine, Metropolitan
Classic Indian fare in a Kings Drive strip mall
Hart’s order: Saag paneer or lamb korma. “And their samosas are out of this world,” he adds.