The city’s most underrated donuts

From pizza-topped to pretzel twists, here’s what donut shop employees say we’re missing out on

Over the years, donuts have evolved to include some of the most innovative combinations of technique and flavors. Local donut shops start each day creating delicious donuts, such as strawberry cream cheese, mango passion fruit habanero, and more. We connected with owners, managers, and pastry chefs to learn which donut they believe visitors should order when looking to satisfy a donut craving. Here’s a list of the most underrated donuts in Charlotte.

Most underrated donuts: Raspberry donut and bread pudding
What’s on it/in it: The raspberry donut is a brioche dough, homemade raspberry glaze, and sprinkles. The glaze is made by using fresh and frozen berries and sugar. The bread pudding consists of milk, cream, eggs, sugar, nutmeg, cinnamon, brown sugar, and pecans. Each serving comes with a side of homemade caramel sauce.

Most underrated donut: Strawberry cream cheese (usually made by request only)
What’s on it/in it: A powder-coated donut that’s filled with cream cheese, topped with strawberry jelly and cake crumbles.

Most underrated donut: Peaches and cream
What’s on it/in it: It’s crème fraîche, whipped cream, and Bavarian cream folded together inside with chopped peaches and a drizzle of caramel. 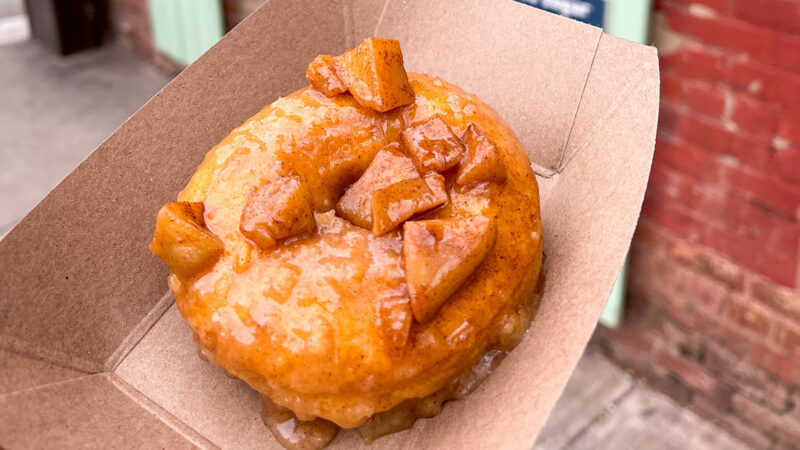 The apple pie donut from NoDa’s Reigning Donuts is only available on Tuesdays. Photo courtesy

Most underrated donut: Apple Pie (only available on Tuesdays)
What’s on it/in it: The made-to-order doughnut is topped with a cinnamon, sugar, apple, and butter mixture. Then, it’s topped with large apple chunks.

Most underrated donut: Pretzel Twist
What’s on it/in it: Cinnamon yeast doughnut in the shape of a pretzel that’s covered with vanilla glaze. It’s also vegan.

Most underrated donut: Pizza Fritter
What’s on it/in it: A donut topped with Italian-style tomato sauce, mozzarella, and parmesan cheese. A vegan option is available. 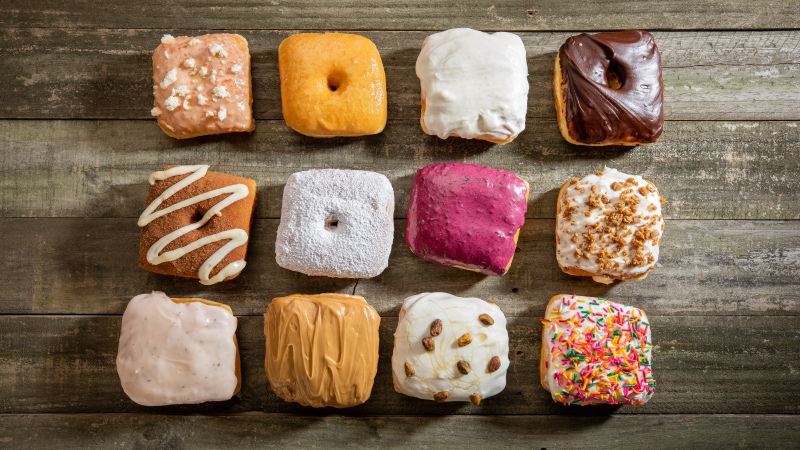 Your Mom’s Donuts are a signature square shape. Peter Taylor

Most underrated donut: Vanilla Bean
What’s on it/in it: A simple donut that starts with a glazed donut and is covered with fresh-made vanilla bean frosting.