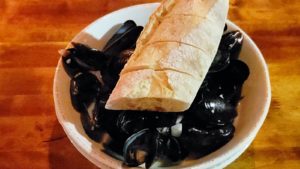 Folks in the restaurant industry know good food, so we want to know where they eat when they’re outside of their restaurants. In this series, we ask a member of the culinary industry to share their favorite local restaurants (not including their own) and what they order. Amanda Britton, the mixologist behind the stellar beverage programs at Bardo and newcomer Vana, hasn’t let her list be influenced by Charlotte’s hype machine. Here’s where she eats.

Soul Gastrolounge, Plaza Midwood
A longtime Charlotte favorite for influenced small plates
Britton’s order: The pork belly tacos and Supernova Roll.
Pro tip: Bring a friend with a similar taste. “My eyes are always bigger than my stomach,” she says.

Chilito Tacos, food truck
A taco truck with a fervent fan base often found at Resident Culture and Camp North End
Britton’s order: Barbacoa breakfast tacos
Pro tip: They sell out quickly, so follow them on Instagram to find out where they are popping up next.

Moosehead Grill, Montford
“This place is all the things a local neighborhood bar should be,” Britton says
Britton’s order: Uncle Donnie’s Blackened Wings and a cold local draft