Thank you to everyone who joined us for the first annual UPPY Awards! The evening was everything we’d hoped for — full of fun, excitement, and a celebration of the hospitality industry and its supporters, as well as fantastic food and drinks from Dressler’s. Find more photos of the evening in our Facebook album.

The greatest driving force in launching Unpretentious Palate’s People of the Year was a need for something positive in the restaurant industry. The past year and a half have been a trying time for everyone in Charlotte’s food and beverage scene, and we’re grateful to everyone in the restaurant industry who have kept us with some semblance of life as usual at the places we love.

With our motto being “Celebrate the good,” we wanted to put together an occasion to do just that. We started the UPPY Awards, drawing on our readers’ knowledge to honor the people who made a difference in the city this year in 13 categories, from Farm of the Year to Chef to Watch. Our editorial team selected a winner among each of the three finalists chosen by readers. While each finalist was deserving, what they’ve accomplished over the past year was a deciding factor.

Meet the debut winners of our UPPY Awards!

FOOD TRUCK OF THE YEAR 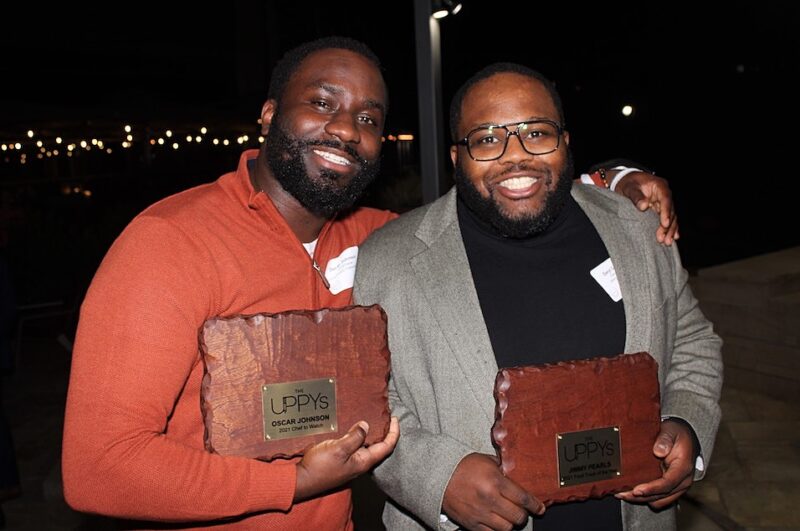 There’s an aura of personality about the menu at Jimmy Pearls, inspired by the hometowns of owners Daryl Cooper and Oscar Johnson. From struggle meals to fresh catches, each dish subtly tells the story of its owners’ upbringings — a story they generously share with us. Find the food truck’s flavorful fried seafood dishes regularly at Camp North End in The Boileryard.

Finalists: Halal Food Truck and What the Fries

GHOST CONCEPT OF THE YEAR

Your Farms, Your Table 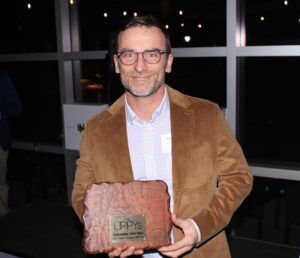 Sam Diminich of Your Farms, Your Table. Photo by Daniel Coston

The combination of restaurant-quality dishes and chef/owner Sam Diminich’s ability to bring out the best of the ingredients has fostered rapid growth for Your Farms, Your Table — one we see staying on track long past the pandemic. He’s also used the business to raise money for various charities in Charlotte, giving back to the community through his work.

Finalists: Horace’s Hot Fried Chicken and Your Farms, Your Table

POP UP OF THE YEAR 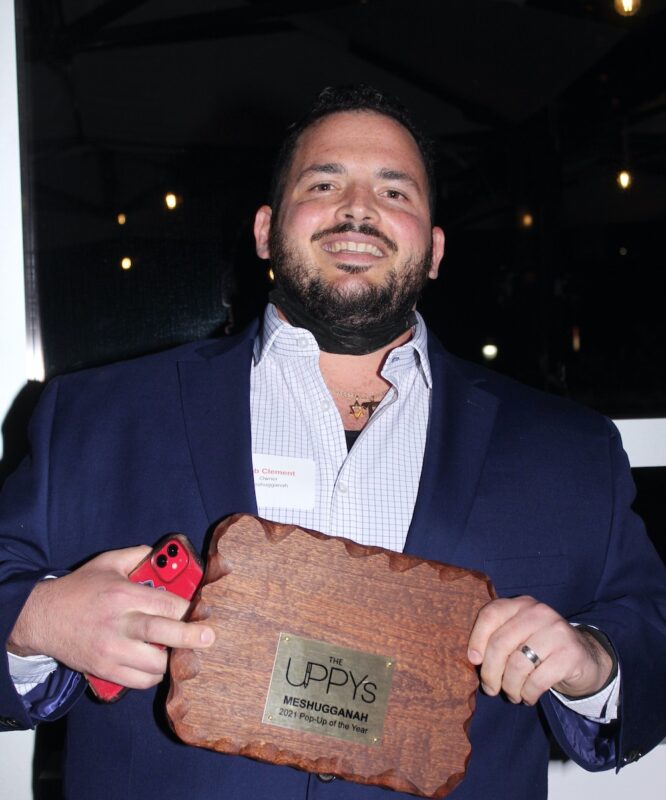 When Rob Clement left The Porter’s House amid the pandemic due to health concerns, he and his wife decided to make the jump to follow a dream: opening a traditional Jewish deli. What started as a small pop-up has grown a devoted following, and will soon become a brick-and-mortar deli serving traditional Jewish fare.

FOOD STALL OF THE YEAR 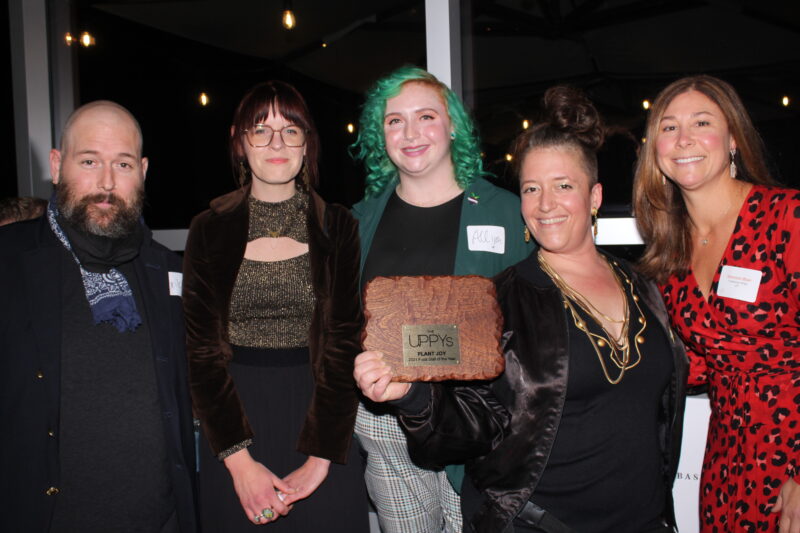 Chef Julia Simon has been plant-forward thinking since 2012 with Nourish, Charlotte’s original vegan meal delivery service. From prep to plate, her dishes are responsibly-sourced and sustainably packaged. Simon opened Camp North End’s fourth and final stall, Plant Joy, during the 2020 Thanksgiving season. Far from bland or boring, Plant Joy’s vibrant offerings range from favorites like the “Falafel Tower” to the “Rainbow Platter” and even a (spread-joy-to-others) “Pay What You Can Plate.”

Finalists: Orrman’s Cheese Shop at The Market at 7th Street and The Dumpling Lady at Optimist Hall 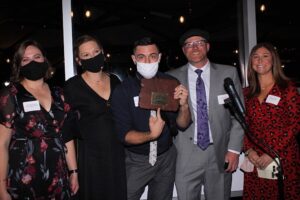 FARM OF THE YEAR 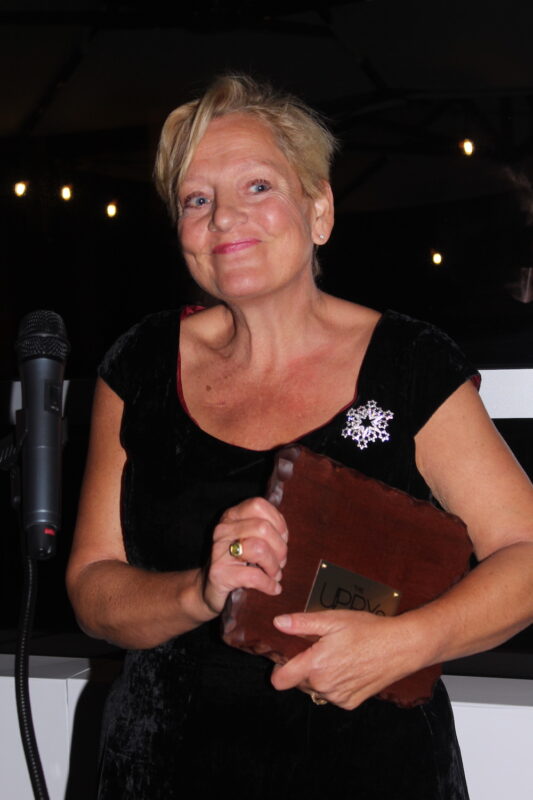 Kim Shaw, co-owner of Small City Farm, started growing produce in 2007 while employed at The Club at Longview as the catering manager. She and executive chef Paul Verica had plans to expand the garden, but that plan was not funded. Instead, she segued into growing produce for The Club at her Cotswold home half-acre garden with her husband, Rohan Gibbs. As demand increased, they purchased three acres in northwest Charlotte and are one of the only certified farms within the city limits — and one of the few dealing with the cost of using city water. For the past few years, Kim has been balancing treatment for an aggressive form of breast cancer while managing the demands of running a farm. Still, Kim and Rohan are passionate about their farm; they distribute through Freshlist and sell directly to some restaurant chefs, including Paul Verica at The Stanley and Orto.

MIXOLOGIST OF THE YEAR 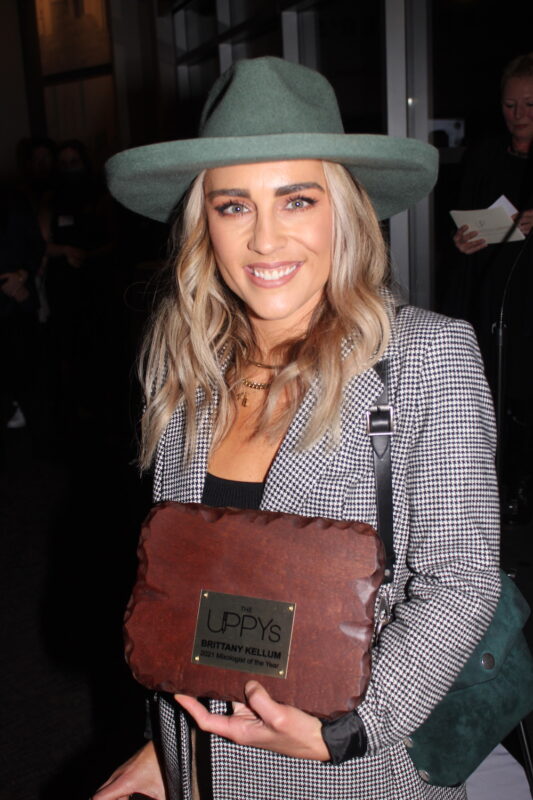 Brittany Kellum, or “BK” to Fin regulars, worked for Rare Roots Hospitality at Dressler’s Metropolitan while in college at UNCC before joining the team at Dogwood Southern Table when it opened in 2014. There, BK found a passion for mixing drinks and the hospitality behind it, leading to her current role as the bar manager at Fin & Fino. Her team, lovingly known as “BK and the Clams” are helping to shape a growing cocktail scene in Uptown Charlotte.

SOMMELIER OF THE YEAR 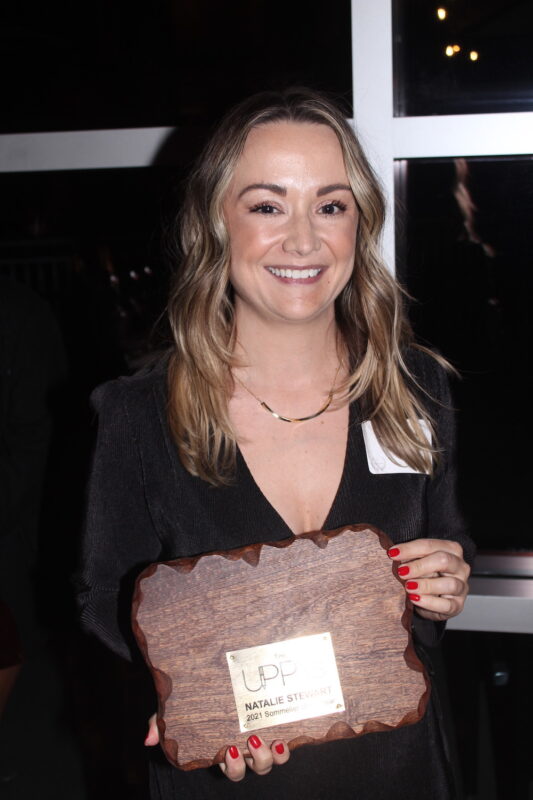 Natalie Stewart has been working in the food and beverage industry for 20 years, but will soon become a business owner for the first time when Bar à Vins opens in early 2022 in NoDa. Before Bar à Vins, she was the wine director and assistant general manager at Fin & Fino. The list there bears her trademark, with a focus on small-production wines that most Charlotteans are not familiar with. She is passionate about getting guests outside of their comfort zone and introducing them to rock stars of the wine world in a fun, approachable way. Her fresh approach to wine exemplifies her amazing palate and breadth of knowledge.

PASTRY CHEF OF THE YEAR 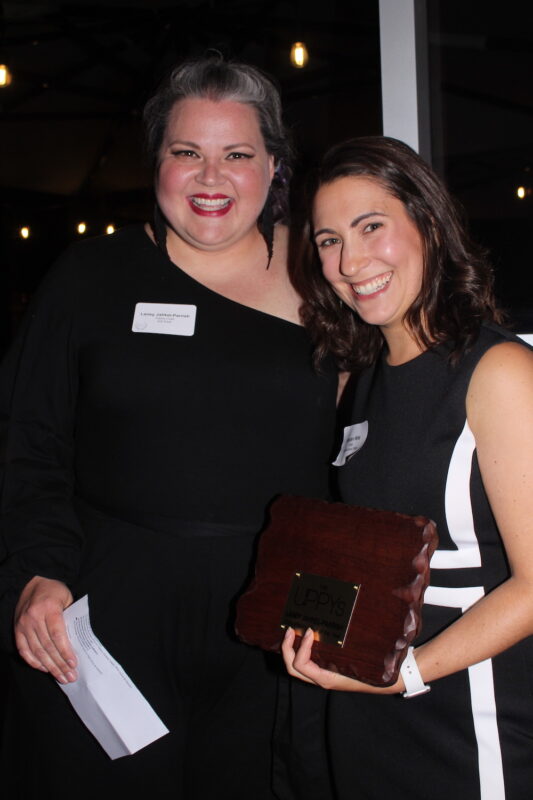 Pastry chef of the year Laney Jahkel-Parrish with UP editor Kristen Wile. Photo by Daniel Coston

When stepping into the position formerly occupied by Charlotte’s most respected pastry chef, Ashley Boyd, Laney Jahkel-Parrish showed no indication of feeling the pressure of such a move. And she took no time in making the dessert program at 300 East hers, either. Her creativity furthers 300 East’s path to becoming a dessert destination with options like caramel mayo cake and fun holiday offerings, including a St. Patrick’s Day pudding cup with Bailey’s whipped cream and a crunchy Lucky Charms topping. Despite that playfulness, her flavors and plating show she’s serious about her craft, and we should be paying attention.

GENERAL MANAGER OF THE YEAR 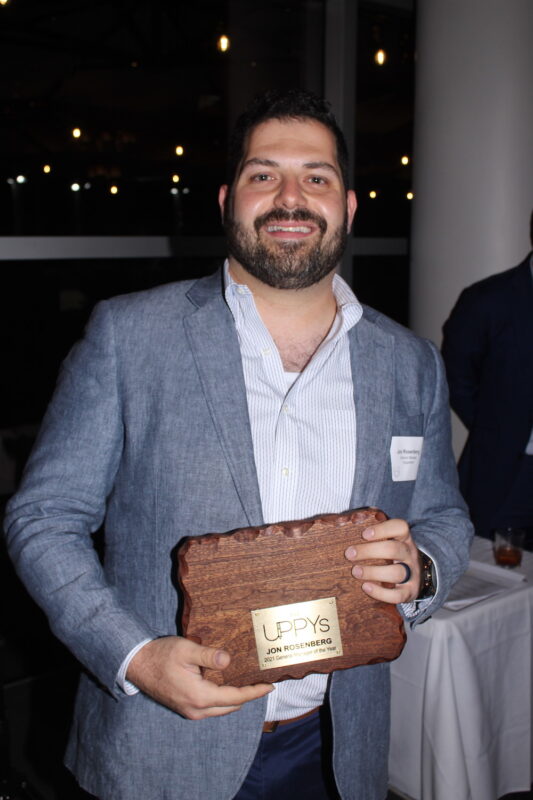 With delays due to both the pandemic and construction, by the time it welcomed diners, a meal at Supperland was a highly coveted reservation. Tables were booked up, and guests lined up outside for the chance to be seated when the restaurant opened. Yet the front-of-house staff never seemed frazzled or even rushed — the stress they must have felt during a highly anticipated opening was expertly veiled. That achievement requires strong management, evidence that general manager Jon Rosenberg is among the best in town. —Kristen Wile

CHEF OF THE YEAR 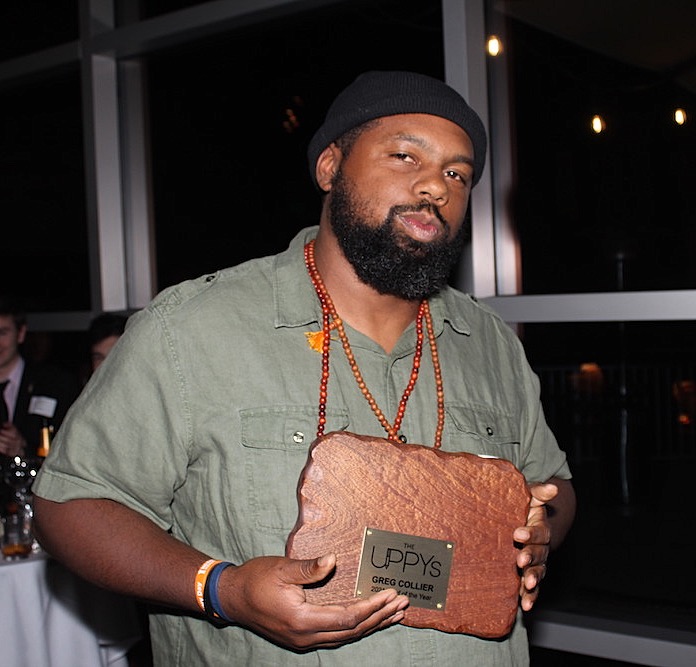 Greg Collier, the chef behind Leah & Louise, is done playing the game. The game, after all, seemed to be fair only for a chef who is a white male. Instead, Collier — along with his wife, Subrina — is rewriting the rules. He opened a restaurant that takes Southern food and makes it personal, hiring a diverse staff and mentoring them to become some of Charlotte’s top culinary talents, and serves dishes with complex yet harmonious flavors. As a Southern city looking to make its mark as a food town, we should all be grateful to Collier for making modern Southern cool just as it was in danger of becoming an over-done, predictable cuisine. —Kristen Wile 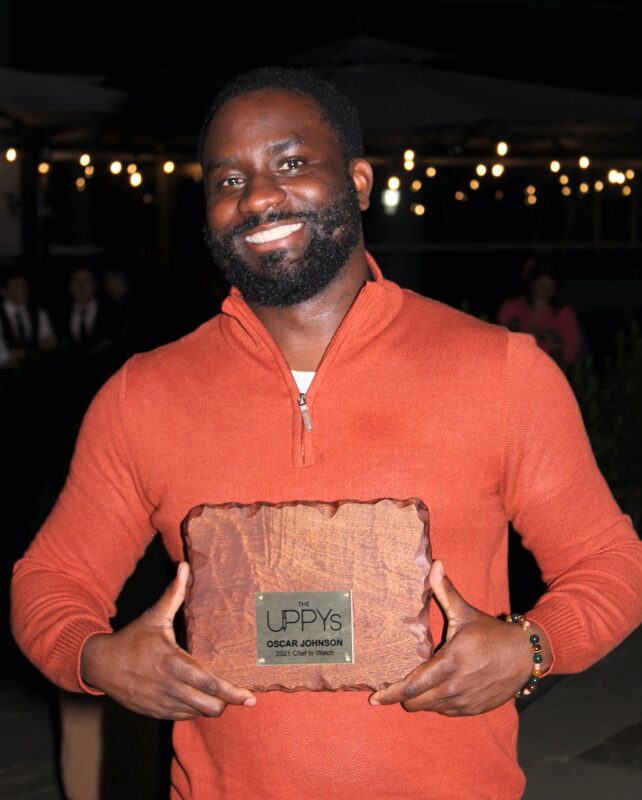 Chef Oscar Johnson’s talent is possibly only outshone by one other character trait: his positivity. Johnson’s brightness is catching, his love for his industry transparent. As co-owner of food truck Jimmy Pearls, he’s an example of where we hope Charlotte’s culinary future is headed. His gratitude and brightness are the antithesis of the yelling executive chef stereotype of old, though his culinary talent is equal. 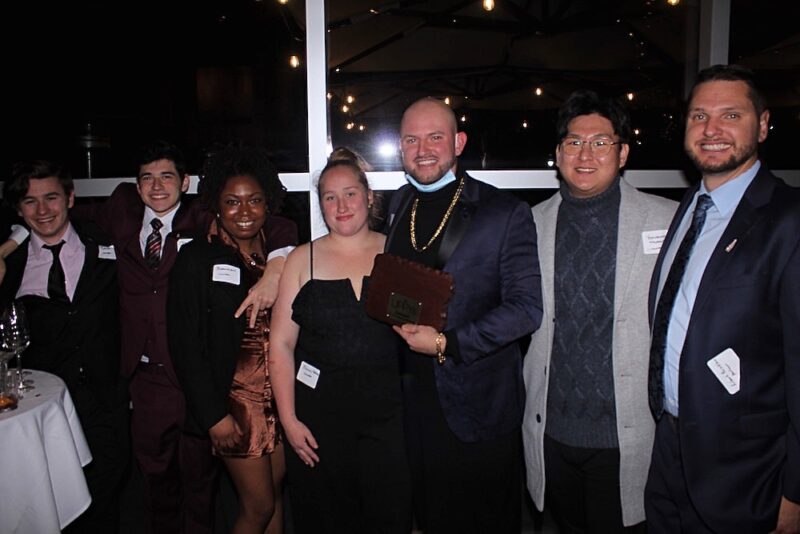 When Sam Hart says he’s going to do something, he does it. And does so well — much to the surprise of veteran chefs in Charlotte. The Central Piedmont Community College culinary-trained alum is using what he learned (both good and bad) while working in Chicago’s famed Alinea to return to his roots and shake up Charlotte’s food and beverage scene. He’s putting his kitchen crew center-stage where he feels they belong, both in terms of show-stopping presentations for Counter- goers and in regards to compensation and benefits. Under Hart’s leadership, his staff receives competitive salaries, quality health benefits, ample PTO, an automatic 20 percent service fee in customers’ patronage, a culture that promotes mental health, and professional development opportunities to grow in skill and creativity.