The loss doesn’t leave a hole – it leaves an entire empty vat in my heart, longtime food writer says


Editor’s note: This story has been unlocked to honor Catherine’s memory. Support our work by becoming a member. 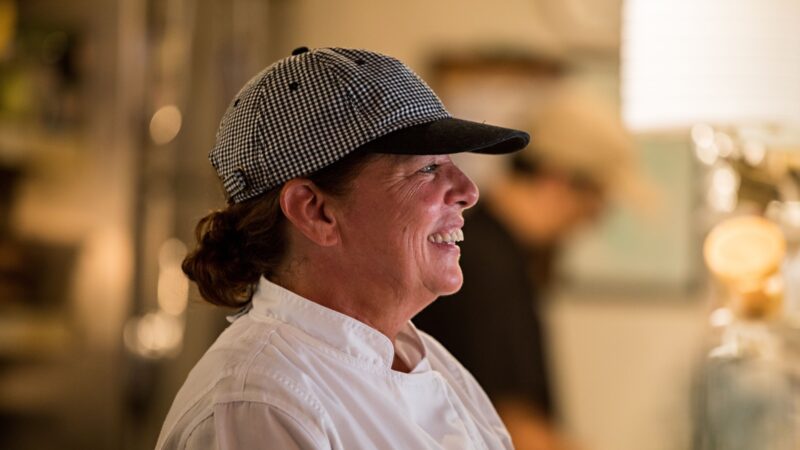 Catherine Rabb, chef and owner of Fenwick’s, passed away after a quiet battle with cancer. Photo by Peter Taylor

When the news rocketed around Charlotte last week about the death of Catherine Rabb, on Dec. 8 after a private battle with cancer, much of the culinary industry was struck speechless.

Rabb was many things: The chef and co-owner, with her husband Don, of Fenwick’s. A respected wine expert with almost every certification you can get, including certified sommelier. A chef-instructor at Johnson & Wales University and a former teacher at Central Piedmont Community College.

Only 64 years old – she seemed much younger – and barely 5-foot-2, she covered a lot of ground in Charlotte.

Whenever I think of her, I remember a picture from a 2001 story I wrote for The Observer on how chefs make chicken salad. We called in a chicken wrangler and did a group portrait with chefs Tim Groody, Mark Martin, Jim Alexander, and Catherine, all wearing white chefs’ jackets and holding live chickens. In the shot we used, Groody’s chicken was flapping, while Catherine was cradling her chicken gently. The photo stayed with me, because it captured Catherine as her completely unflappable self.

Catherine was closer to me than a lot of sources. Not only did I interview her many times (but not too many, as I’ll explain), I was also her editor on a wine column she wrote for The Observer for at least six years in the 2000s. She always said I taught her how to write. It wasn’t a spit in the bucket to what she taught me: about wine, about restaurant service, about how to stay cheerful and never, ever take yourself too seriously.

All I can do to help honor her memory is round up a few things you should know:

She was a pioneer among women in Charlotte.

When I started seriously covering food here around 1990, Charlotte’s chef cadre was almost all male. Catherine, who owned the restaurant Catherine’s (Fenwick’s came later) with her husband Don, was the exception. I had an editor who was a stickler for including women in stories. That could be tricky, as Catherine was the only female chef.

I interviewed her the first time in 1993, for a Thanksgiving roundup of chefs’ tips for cooking turkeys. (Catherine’s: “Combine garlic, olive oil and rosemary and let it stand, refrigerated, overnight. The next day, rub the mixture on the turkey and over it with cheesecloth for the first hours of roasting. Remove the cheesecloth to finish browning.”)

It quickly became a joke between us: Finding a woman to quote in a story on chefs in those years was “round up the usual suspects,” and Catherine was the only suspect. So we made a deal: I would only call her once or twice a year. The rest of the time, I’d tell my editor she didn’t return my call, or she was too busy, or she was out of town.

She was the least snobby wine expert I’ve ever known.

I asked Catherine to do truly unspeakable things – bargain bubbly roundups, boxed wine tastings and once, in 2007, a tasting of 18 wines under $4. One of her quotes from that story: “Just a couple of the wines were vile. I will drink ANYTHING – I kid you not – and there were a couple I could barely try.” For Catherine, that was as close as it got to saying something negative. (The best tip she taught me that day: If you’re really going cheap, stick with reds. It’s harder to hide flaws in white wines.) She wanted wine to be approachable to everyone, and her attitude helped make it so.

She was a teacher as much as a chef.

Everyone who knows Catherine remembers her role at Johnson & Wales University, where she taught beverages and service. Fewer may remember that before JWU, she taught at Central Piedmont Community College.

Her enthusiasm for teaching was special: The love for her students dripped from her.

She did more than teach: She had a passion for learning about wine, with certifications from a long list of organizations. Sara Guterbock, a wine distributor and one of Charlotte’s best wine experts, first took a continuing-education wine class from Catherine in 2008 and stayed a close friend.

Take it from an amateur like me: She never made me feel stupid when I didn’t taste what I was supposed to.

Even when she was teaching a full load of classes, she was still running Fenwick’s, ball cap covering her blonde hair while she wielded a spatula at the burger grill. She’d tell me funny stories about the travails of running a small restaurant, like fielding customer complaints or the glamour of getting down on her knees to clean out the grease traps.

Guterbock remembers her making hundreds of pies for her Thanksgiving catering operation: “The number of things she did and yet, she managed to smile all the time.”

Damn, how that woman could smile.