Charlotte pastry chefs are getting the respect and attention they deserve

Restaurants like 300 East and The Fig Tree have long set the standard for pastry programs in Charlotte. It wasn’t until recently, as the city grew and culinary talents gained national attention, that Charlotte restaurants began to add robust pastry programs to their businesses as an essential prong of success and memorable guest experiences. Trying to stand out in a crowded restaurant scene, chefs are looking to pastry and the talents behind it, realizing their dessert programs deserve the same authenticity and respect that savory cooking does. That realization is changing the dynamic between executive chefs and their pastry chefs.

Scrolling down Greg Collier’s social media feeds, you’ll see the chef and owner of Leah & Louise often praises his team and their talents before mentioning his own work. Collier celebrates his staff and their relationships, lifting the veil that typically hides the many hands and minds that make a restaurant.

“The ethos of the restaurant is to share the stage with other young, talented Black chefs because we didn’t get that stage,” Collier says.

The chef, who also owns Uptown Yolk with his wife Subrina, does this often when speaking about Jasmine Macon. Macon, a young pastry chef with tenacity often found from a seasoned talent, is introducing Charlotte to desserts and pastries that typically never grace a restaurant’s menu, like a Tang tart, sweet grit chess pie, and a Fig Newton cake. The relationship between Macon and Collier is built on trust, allowing the two to be vulnerable, fostering failure as a milestone in learning, and approaching any idea as a possibility for greatness and success — whether public or internal.

“There are different ways we get to the end process,” Collier says. “I usually ask the question about the ability to do what I have in my mind and Jasmine figures it out from a technical standpoint, getting to a place where we’re both happy with the final outcome.”

Speaking with Macon and Collier, you realize their bond is professional but rooted in what feels like sibling love. Collier can think of an idea, drawing from his childhood growing up in Memphis, and pitch it to Macon, who can filter his idea and construct a dessert that hits Collier’s nostalgia and exceeds expectations of what he thought possible.

Collier does not silo Macon to the pastry program of Leah & Louise. The tomato cobbler she grew up making made its way onto the menu of this summer and quickly became a favorite of Collier’s. He works to enable Macon’s dreams and ambitions, taking the opportunity to nurture her talent and leadership potential. 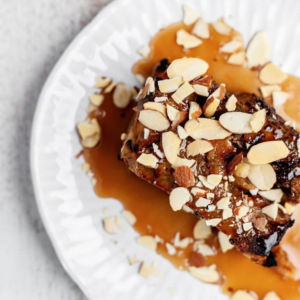 “Having someone that cares and invests in the other things I want to do gives me wiggle room to offer more and ask what I can do for you,” Macon says. Macon has ambitions of her own, hoping one day to open a donut shop — ambitions her bosses support.

“I want people to know who Jasmine Macon is, who the pastry chef at Leah & Louise is now, but also know the individual as a person when she goes off on her own ventures,” Collier says.

Collier is not the only chef in Charlotte respecting pastry and giving talent equal representation. Chris Coleman, chef and partner of The Goodyear House, knew he wanted pastry to play an important role in the restaurant’s identity. Having started a pastry tradition while executive chef at The Asbury, Coleman saw another opportunity to give pastry its own identity — apart from him — in the new restaurant. He hired Becca Rankin as pastry chef to create desserts that matched Coleman’s less-is-more but do-it-well sensibility.

“Pastry is such an important part of modern dining,” Coleman says. “Desserts can be the last thing a guest tastes in your restaurant, and can be the first thing they recall when telling friends about their experience. I’ve worked at places that phone it in and serve dressed-up freezer desserts — it doesn’t do any justice to the rest of their team that works so hard to put out quality food.”

Rankin is a dedicated and disciplined pastry chef. Working with Coleman, Rankin is given creative control of a pastry program that cohesively matches the rest of The Goodyear House menu. Rarely giving ideas, Coleman stays out of the way of Rankin’s seemingly unlimited creativity. Still, Rankin knows and welcomes feedback from Coleman and is developing a greater understanding of what dessert will work from Coleman’s seasoned career.

“I highly value Chris’ opinion,” she says. “I’ll typically run an idea by him, but then I’ll go from there. I also have him taste the final product once I feel like I’ve created something I’m pleased with and take any suggestions he has. We are lucky in that our approach to dessert and flavor is very similar, so we haven’t had any roadblocks.”

“Chris has been passionate about the pastry program and supportive of me, so I find that really motivating,” Rankin says. “I think one of the things I appreciate the most about Chris and The Goodyear House, in general, is that they really credit their employees, whether it’s a social media shout-out or personal praise. It’s lovely to work for a place that celebrates its team and highlights their successes.’’

When the Covid-19 pandemic hit and The Goodyear House laid off their staff, Rankin was one of the first people Coleman called to offer her job back — a gesture that meant a lot to Rankin.

“I was incredibly lucky and humbled to get called back to the restaurant after initially getting laid off with everybody else those first couple months,” she says. “It would have been an easy and economical choice to pass off a couple easily executed pastry items to a prep cook.”

To Rankin and Macon, knowing they are valued allows them to work more freely and creatively. For the restaurants, there is a benefit, too: the strength of the pastry programs at Leah & Louise and The Goodyear House have helped create stronger culinary reputations and more well-rounded menus. Knowing there is job security and that pastry is vital to the identity of their restaurant allows pastry chefs like Rankin or Macon to work without fear that their position is temporary.

This level of respect towards pastry is not only found or achieved in casual fine-dining restaurants. Molly Coen, pastry chef of The Fig Tree, finds the same respect with chef and owner Greg Zanitsch. One of the city’s longtime top fine dining restaurants learned long ago that dessert is important, with pastry chefs like Samantha Allen of Wentworth & Fenn formerly in the kitchen.

“I just know I can go to work everyday and am able to love what I do,” Coen says. “I can try new things and if they work, great, if not, oh well, on to the next idea. Greg is usually in support of anything I come up with, and if not, he will help me change it.”

The relationship is not one-sided. As much as executive chefs have to change and adapt to create balance and respect between savory and sweet, pastry chefs also have to return the same gestures. During the early months of the pandemic, Coen jumped on any task to help The Fig Tree survive.

“For the first half of the pandemic, we were only doing carry-out,” she says. “I was making a couple custom cakes and desserts a week, but mostly helping run curbside and taking orders over the phone — some days even going to pick up fish and last-minute food items.”

As the pastry community in Charlotte continues to grow and finds more respect within the restaurants they work for, those chefs will continue to do great things as they grow with their restaurant groups, or eventually branch out on their own. Either way, the city’s food scene benefits.

“I don’t want soldiers, I want young generals,” Collier says. “Having soldiers is cool, but there is a limit to how long you can be a soldier.”