In sobriety, isolation is the enemy 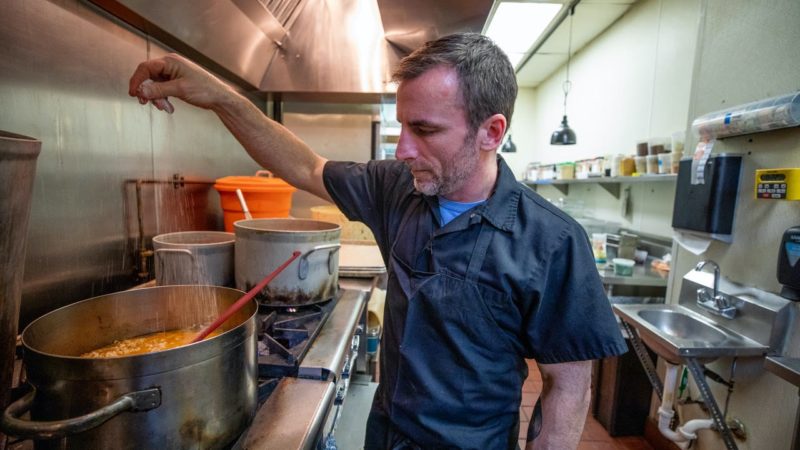 Sam Diminich, the executive chef at Upstream in SouthPark, is co-leader of the Charlotte chapter of Ben’s Friends, an addiction support group. Photo by Peter Taylor

Corduroy pants and a flannel shirt. The outfit hangs in Sam Diminich’s closet as a reminder of the time that these items were nearly all he had. His little sister took him to buy the outfit at Goodwill on the way to rehab, after Diminich had fallen so far into addiction that he had been homeless on the streets of Charlotte for a year. It was at least his dozenth attempt at sobriety, but this time felt different. He knew he had few chances left to change his life. This time, on November 16, 2014, he did it. Diminch, now the executive chef at Upstream in SouthPark, has been sober ever since — and he’s been helping others achieve sobriety, too.

Now, he and other mentors fear the path to maintaining sobriety has gotten much more difficult for those in the restaurant industry who have lost their jobs and are home alone.

Addiction is especially prevalent in this industry, says Rita Clyburn, a certified substance abuse counselor who works with recovering addicts at Charlotte Rescue Mission’s non-profit restaurant Community Matters Café as Clinical Director of Student Services. For someone in early recovery in the restaurant industry, she estimates the success rate of sobriety is about 30 percent. These workers face a unique hurdle: They are constantly reminded of what it was like to drink.

“What the brain is doing is remembering those good times and seeing people in the restaurant that are eating food, having drinks and laughing, who tend to be looking like they’re having a good time — that’s what the brain taps into,” Clyburn says. “They’d have to literally force their brain to remember the end before they came into treatment or recovery, whatever their story looks like, in order for them not to relapse. … but for the majority in early recovery, they do not take the action, so they start fantasizing and entertaining the good times. And they drink again.”

Diminich, whose family has been ravaged by alcoholism, recognizes another factor that complicates recovery in hospitality: the “work hard, play hard” mentality. Growing up in his family’s restaurant, he recalls drinking Coors Light during shifts and using alcohol as a coping mechanism.

“You know, back then, you think you’re invincible, you’re in control,” he says. “Little by little, there’s an invisible line that you cross. And I crossed it at a very early age.”

The most important resource in maintaining sobriety, Diminich says, is a support system. With stay-at-home orders and social distancing, however, many in recovery are left without easy access to their support groups. Ben’s Friends, a support group for those in the restaurant industry who battle addiction, has switched from weekly in-person meetings to daily meetings on Zoom. Restaurateur Steve Palmer is one of the founders of Ben’s Friends. The owner of O-Ku, Oak Steakhouse, Sukoshi, and Indaco has struggled with addiction himself, and he helped launch the non-profit to provide a support group specific to the struggles faced by restaurant industry employees. With their industry being hit first, and likely hit hardest, by the fallout from the coronavirus pandemic, Ben’s Friends members are relying heavily on the support group. Ben’s Friends recently added 11 p.m. meetings several nights a week. 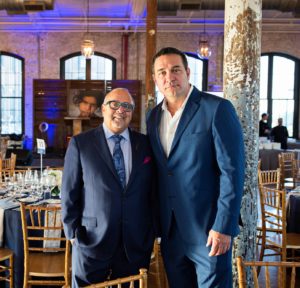 “It’s been especially hard, because one of the reasons you work in a restaurant is that you like being around people, you like serving people, and you like that sense of community and connection that only a restaurant can bring,” he says. “That’s completely gone.”

O-Ku hosts the Charlotte chapter’s weekly meetings. Without them, Palmer fears many people will face what he calls the enemy of addiction and recovery: isolation.

“I think most addicts and alcoholics, myself included, would tell you at the end of our addictions, we were alone,” Palmer says. “We were drinking alone. We were doing drugs alone. And so it’s a very scary time.”

Palmer believes that isolation, on top of the sudden departure from a highly social day-to-day routine, will cause relapse to become a prominent issue as the pandemic drags on.

Diminich, who is a co-leader of the Charlotte chapter of Ben’s Friends, echoes that concern.

“My heart goes out in every way,” Diminich says. “It’s almost emotional just to think about anybody in early sobriety right now who needs some sort of structure with family, friends, in the workplace and everywhere in between. Now, we’re basically telling everybody, ‘Everything we taught you, everything that you know, all these tools that you have — whether they be meetings, fellowship, coffee, dinners together — you can’t do that anymore.”

Isolation, he explains, can cause addicts to begin believing the horrible things they believe about themselves. He recalls having those thoughts.

“You start believing your inadequacies, your hopelessness,” he says. “My alcoholism wanted me alone. It still wants me alone. I haven’t had an urge to drink, but there’s a reason why I keep going to meetings, and I go on Zoom. It’s basically the only disease that will ever tell you you don’t have a disease.”

Without the ability to talk about feelings with someone who understands that struggle, those in recovery can enter a downward spiral that leads them to drink again.

“When they get by themselves, all that thinking comes back and all that negative stuff they may or may not be defining themselves by,” Clyburn, the counselor, says. “And so to erase the fault, they drink. Isolation is one of the worst things that a person in recovery — people in general, but definitely in early recovery — could get stuck in, because they will drink again.”

That concern drives Ben’s Friends, as well as Alcoholics Anonymous and Narcotics Anonymous, to provide as much support online as they can. Diminich says he’s been on the phone with sponsees frequently, and he encourages anyone struggling to stay sober to log on to their meetings. Attendees share how they’re feeling and offer support. Diminich, who had been working to reinvent South Park restaurant Upstream before being laid off due to the temporary restaurant shutdown, says he finds relief in hearing that others feel similar emotions.

If there’s someone you think may be struggling, try to be there for them as much as possible. “Stay connected and reach out to each other, check on each other, talk about what you’re feeling,” Clyburn says. “That’s the most important thing is to talk about what you’re feeling through this.” Diminich says to ask again when someone says they’re fine or good, and probe a little deeper to give them the chance to open up about how they’re feeling.

HOW TO GET HELP