How Milkbread fit into the old Dairy Queen

A van fitted with speed racks makes up for kitchen space 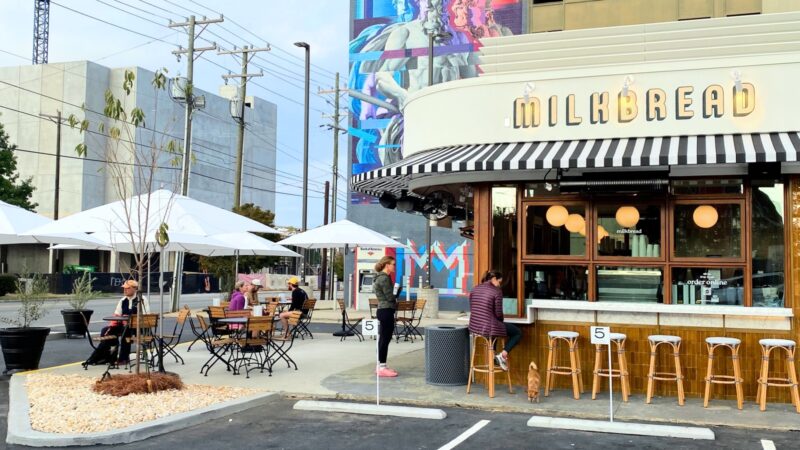 Milkbread — the fast-casual concept focusing on doughnuts, fried chicken, bowls, and salads from Kindred owners Joe and Katy Kindred — opened its Plaza Midwood location last week in the former Dairy Queen on Central Avenue. The Kindreds took over the space in September of last year, working to make some structural changes to support increased air conditioning capacity before beginning on renovations to turn the historic building into the nostalgic and eye-catching storefront it is today. Even while shiny new, the restaurant looks as if it could have been in that spot for decades.

“It’s a labor of love for me,” Katy Kindred says. “I love old buildings. I love seeing them have new life. And I think I would love more of that in the city, more of us keeping what we’ve got and trying to just give it a new life rather than tearing it down.”

Because of that historic nature, however, the Kindreds were limited in what they were able to do. They were only able to add about 800 square feet to the building, which was taken up by the addition of a second bathroom and walk-in cooler space. In comparison to the Davidson location’s kitchen, the new space is small — but thanks to a Milkbread-branded van with speed racks, the smaller size hasn’t been an issue.

In order to stay supplied with fresh baked goods despite the kitchen space for pastry production, all doughnuts, biscuits, and cinnamon rolls are made overnight and throughout the day at the Davidson location, then stacked onto speed racks and rolled onto the van, where they’re driven down I-77 to Plaza Midwood. When opening the second location, the Kindreds brought back an overnight shift as well, doing prep work for both locations and further minimizing the space needed in the small Dairy Queen space’s kitchen. Throughout the day, the larger Davidson kitchen is on call to send down reinforcement of products. 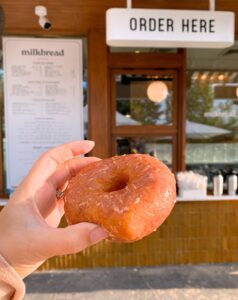 Milkbread doughnuts are made through the day in Davidson and driven down to Plaza Midwood. Kristen Wile/UP

“We have a whole system now, it’s almost like an order guide,” Kindred says. “You send them, ‘This is what we need: We need a puffed rice for the grain bowls and this, we need that, we need that.'” Then, it’s on to the van.

Unlike many restaurant openings, Milkbread quietly opened, coming in with its full hours right from the start: 7 a.m. to 11 p.m. daily. With this being the couple’s first restaurant in Charlotte, Kindred says they wanted to open in that way to see how much business the hours bring. With no dining room and a smaller kitchen, the restaurant can run with a small number of staff members during quieter hours.

“It’s such a small space, we can operate it really pretty minimally on slower times,” Kindred says. “It gives us the opportunity to kind of see, can we build business in certain areas? Or do we need to scale back? And we’re flexible to change them if we need to. If we’re like, you know what, Sunday night is never going to be a thing, we’ll draw back and keep it flexible because we don’t want to miss an opportunity.”

So far, Milkbread has proven popular in the neighborhood. Even through the recent cold snap, the outdoor-only seating has been packed in the opening days. While the historic regulations of the building won’t allow a permanent covering, heaters are planned for the patio space. The restaurant also has a robust online ordering platform, something that will be advertised more heavily once the opening rush settles.

Though Charlotte has adopted the Kindred’s namesake first restaurant, Kindred Restaurant in Davidson, as our own, this location of Milkbread is the couple’s first restaurant in Charlotte proper. As they settle in to Plaza Midwood, they’re planning to take some time to learn the neighborhood and adjust operations as needed — something that took several weeks at the debut Milkbread.

“We have our ears up and we’re learning, because it’s much more dense than Davidson,” Kindred says. “We don’t know how it’s going to be here; whether it’ll be different or not. But Davidson, I would say it was solid a month or two before things started to calm down into a rhythm. And we’ll see if it’s the same here.”