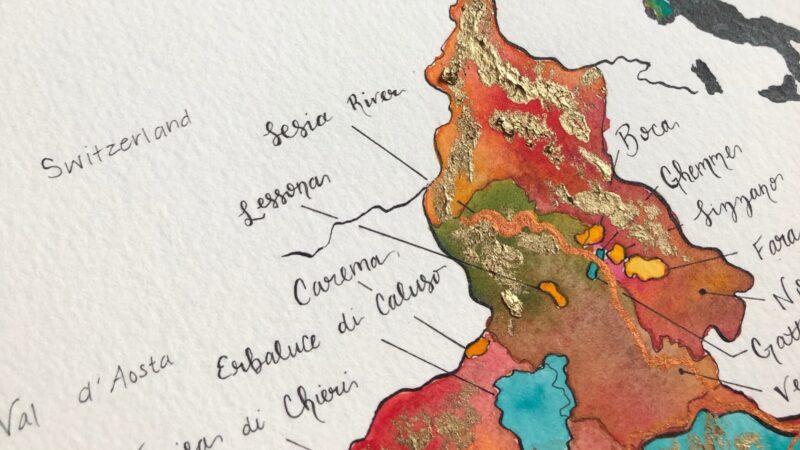 You can’t discuss a bottle of wine without talking about where it comes from. Wine’s relationship to place is so intrinsic to its character that wine professionals study maps with fervor. Maps are the key to understanding the world of wine; they present the big picture from which you can dive into the details. Celine DeMaesschalck doesn’t just study that big picture, she paints it in watercolor. “First I’ll do the outline in India ink with a quill,” DeMaesschalck says, “and then I’ll go in and paint, but what I like to do is kinda just one big flow. I feel like that’s the most fun and at the end of the day it ends up being a better print.” 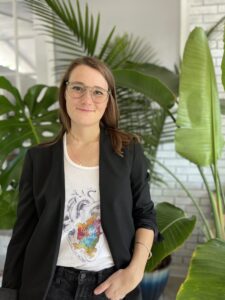 DeMaesschalck’s maps depict wine regions that glow with blues, oranges, reds, and purples. At first glance, varied colors distinguish subregions from one another. But upon closer look, they blend together, creating unique hues that reflect the nuances of the winemaking stories that live there. Mountains and rivers wind through in bronze fluid ink and heavy gold acrylic, which DeMaesschalck can’t get enough of. “I guess I just became really gaudy in my 20s,” she laughs. But she also recognizes that her color choice reflects the significant role that rivers and mountains play in wine-growing regions. “It’s kind of like liquid gold,” says DeMaesschalk. “In classic regions, like Sauternes, you need the river because it makes it really humid so you can get botrytis to make sweet wine.”

DeMaesschalck sells her wine maps, prints, and shirts as Modern Hobbyist on Etsy, but this is only a small piece of what she does as a wine professional. After moving to Charlotte from Foxborough, Mass., in 2014, she completed her Bachelor’s in Food Service Management with Johnson & Wales University by the age of 21. At 26 she completed the Level 3 Award in Wines through the Wine & Spirit Education Trust, an internationally recognized certification that includes a rigorous test with a blind tasting portion. At 29, she’s the general manager of Assorted Table Wine & Shop in Uptown where a small selection of her maps can also be found. Her work has been published in David Beresford’s Brothers In Arms and featured in all 48 episodes of the educational TV series WineMasters Class.

“I’m really interested in learning and growing, I mean, that’s part of why I moved to Charlotte—for growth,” says DeMaesschalck. “I think that’s where the artsy side comes in. It’s a little more relaxed than what I normally do.” Having watched the Charlotte food scene grow since 2015, DeMaesschalck hopes to see more spaces taking a casual, educational approach to classic wine. “It seems like we’re trending towards that natural vibe or very upscale, there’s nothing in between,” says DeMaesschalck. “Somewhere that you can learn a lot but in a relaxing atmosphere—I think that’s what we need to aim for.”

DeMaesschalck has traveled to several of the regions she laces with gold. She has found her way to France, Spain, and Italy and spent two weeks working in a vineyard in the Loire Valley. “It sounds dreamy; it was not as dreamy as it sounds!” DeMaesschalck says. During her time there, she saw first-hand what it takes to make natural wine. “Loire is the homeland for that style.”

A natural wine drinker herself, she says that while the natural wine trend has caught on in Charlotte, it’s often misunderstood.

“That’s been interesting to watch and interact with consumers with—there’s so much confusion around it,” DeMaesschalck says. “I prefer wine to be as quote-on-quote natural as possible. That said, I also think we need some preservatives. Sulfur is not necessarily the enemy in a lot of wineries.” Her time working in the Loire Valley taught her that even in the mecca for natural wine, wine needs some degree of intervention, and what that looks like varies among winemakers. “I would say a lot of those producers, and the one that I was helping with, they were very into low or no sulfur. But I do remember we had to use a fermentation assistor for the white wine, the chenin—you’re not necessarily using nothing,” DeMaesschalck says. “Some things are permissible and some aren’t, and no one knows what they are.”

Back in Charlotte, DeMaesschalck uses what she’s learned from travels, studies, and painting sessions to curate a selection at Assorted Table that is both classic and adventurous and creates opportunities to learn. “What we try to keep on is a healthy mix but mostly esoteric stuff,” she says. “If we haven’t heard of the region, if we haven’t heard of the grape, let’s put it on the shelf.”