The bartender was most recently at Supperland 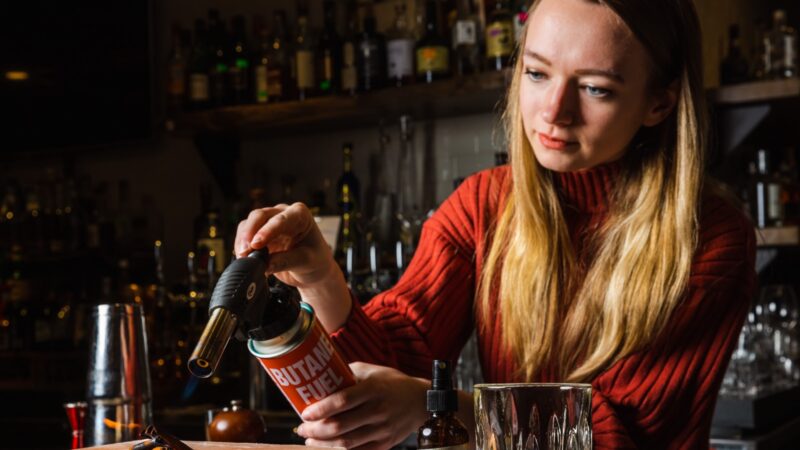 Winter Voss returns to Dogwood from Supperland to run the bar program. Photo courtesy of The Plaid Penguin

Winter Voss will take over the position as bar manager at Dogwood Southern Table following Eli Privette’s departure to focus on returning to school. Voss was most recently behind the bar at Supperland, though longtime Dogwood regulars will recognize her from her time as a server and bartender at the SouthPark restaurant. Voss first began working as a server at Dogwood in late 2017, before joining the bar team under Brian Lorusso in 2019. She returns to Dogwood overseeing the bar program.

She’ll launch her debut cocktail menu later this week, holding off on some of her more ambitious plans while she gains confidence in ordering liquor during ongoing ABC struggles.

The heart of the menu will be in house-made syrups and infusions, giving complexity to the drinks. The barkeep’s call, which has been a Dogwood signature since opening under Brian Lorusso, will remain, and despite a lean cocktail menu, guests can expect constant creativity through ordering a custom drink.

“That’s where my bartenders and I will create a lot of cool concoctions and pretty inventive stuff that will allow people to be exposed to more complex stuff that they might not have gone for or ordered otherwise,” Voss says.

She’ll be sourcing from local farms, as well as implementing practices to reduce waste, something she’s learned under Supperland’s Colleen Hughes and Rhea Buck. The menu will also feature a drink to pay homage to Lorusso, another one of her mentors and the person she credits for giving her a chance behind the bar. The drink, called Up in Flames — high proof whiskey, brown sugar bay leaf and black pepper syrup, and a touch of Fernet with smoke and salt bitters in a glass smoked with cinnamon, is a nod to Lorusso’s Legends of the Fall.

“I’ve been very fortunate to have worked under some of the best bar managers, I think, in Charlotte,” Voss says. “For example, under Brian, I learned how to access creativity and to move freely and just follow whims. Make drinks that taste good. Have fun. Talk to guests. I learned how to do that warmth and hospitality that he’s known for. Working under Colleen Hughes and Rhea Buck, I’ve learned a lot about organization, structure, and being very mindful of choices of what you put in drinks and the kind of scientific approach to bartending.”

The restaurant’s new mixologist also plans on highlighting Dogwood’s whiskey collection, launching a whiskey of the week offering that will feature different spirits in an old-fashioned at market price each week, complete with tasting notes and details on the whiskey. Her first day back behind the bar was Monday, Jan. 17.

“I’m looking forward to being back among some old friends, the familiar faces I worked with over the course of three years,” Voss says.

This story has been unlocked by Rare Roots Hospitality. Paying to unlock a story offsets the subscription revenue we rely on to continue telling Charlotte’s food stories. Want to unlock a news story? Reach out to us.