This week, we interviewed Conrad Hunter, owner of Foxcroft Wine Company. With three Charlotte locations, plus one in Greenville, S.C., Hunter has a good selection of dining spots to enjoy and keep it all in the family. But he also enjoys heading out to a number of other area restaurants, particularly these five.

Doan’s Vietnamese Cuisine, Starmount
Southern Vietnamese-style pho and other Asian fusion dishes
Hunter’s order: Pho with oxtail broth. “I’ve frequented just about every Vietnamese restaurant in the city,” says Hunter. “We discovered Doan’s about a decade ago and we eat there pretty much every week. My kids love it. The flavors are clean and well-executed.”

Osteria LuCa, Montford
Casual by day, elegant by night Italian gathering spot
Hunter’s order: Char-grilled Caesar salad, bucatini de mare, negroni. “Ken and Tricia (Martino) opened their place during the start, and worst part, of the pandemic and they’ve been a favorite of my wife and I ever since,” Hunter says. “It reminds me of one of those neighborhood places you’d find in Boston or Brooklyn. Solid and oblivious to trends. The menu is solid and changes seasonally. For all-around hospitality they’re hard to beat.”

East 74 Family Restaurant, Matthews
Traditional Carolina “meat & three” restaurant
Hunter’s order: Beef tips on rice, fried squash, and okra. “Sometimes you just want a home-style meat-and-three and these guys do it right every time,” says Hunter. “You know, the kind of place where you’ll always find three or four police cars in the parking lot. They also know everybody who comes in and have a proper sweet tea. It’s one of the few places I can take my mom to eat that she doesn’t put up a fight over.” 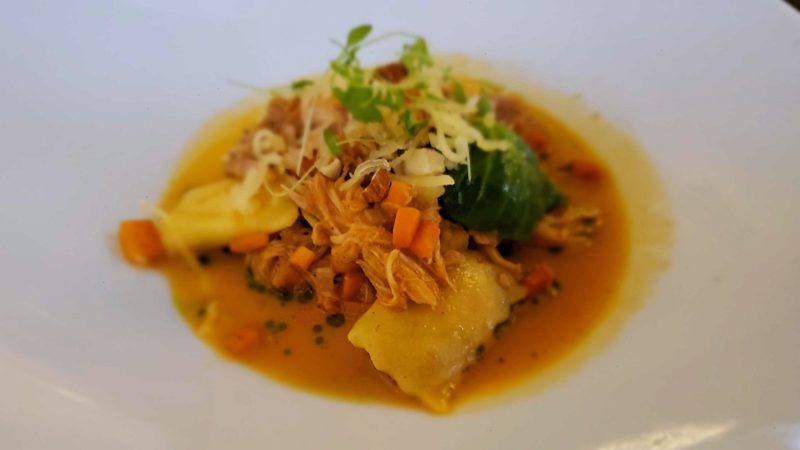 Bar Marcel, SouthPark
Upscale bistro drawing on a variety of European influences
Hunter’s order: Guajillo-cured pork, braised rabbit tagliatelle. “Solid food, service, and all-around atmosphere,” Hunter says. “I like the small plates options of Spanish/Italian/French influenced flavors which is how we like to eat. Casual without pretense and some of the best staff in the city. The wood-fired flavors help add another level to the menu.”

Kabob-Je Rotisserie & Grille, Matthews
Lebanese and Mediterranean cuisine in a casual setting
Hunter’s order: Lentil soup, charcoal grilled kafta kebob. “The best Lebanese food in the city. All of their bread is baked in house. It’s been a go-to since they opened,” Hunter says.