This week, we interviewed Jonny Cox, executive chef at Fin & Fino and recent host of one of our Meet the Chef dinners. While many of his dishes at the popular Uptown restaurant portray Italian and Mediterranean influences, when he’s not on the clock, he heads for the flavors of Asia and the Indian subcontinent. He particularly cites these six Charlotte area dining spots.

Wide variety of phở and other Vietnamese specialties
Cox’s order: Extra large phở chín and summer rolls. “Every Sunday I wake up at noon, get on my motorcycle and take a ride down to Phở Hoà. I douse the summer rolls in the habanero chili oil (you have to ask for the extra spicy oil),” Cox says.

All-you-can eat Korean restaurant
Cox’s order: Kimchi, beef tongue, spicy pork belly, and brisket. “I just discovered this place but fell in love immediately,” Cox says. “I enjoy eating until I’m sick and this is the place for it. I get two orders of everything.”

Indian cuisine in a fine dining setting
Cox’s order: Murgh (Chicken) Tikka Masala. “This place has always been a favorite to take a friend to,” Cox says. “I ask for at least three sides of the garlic naan. Dipping it in the sauce is simply as good as food can get in my world.”

Classic and modern Japanese cuisine
Cox’s order: Tonkotsu ramen with spicy miso, spicy tuna rolls. “Best ramen I have had in Charlotte,” Cox says. “I always ask for an extra egg. The eggs are out of this world.” 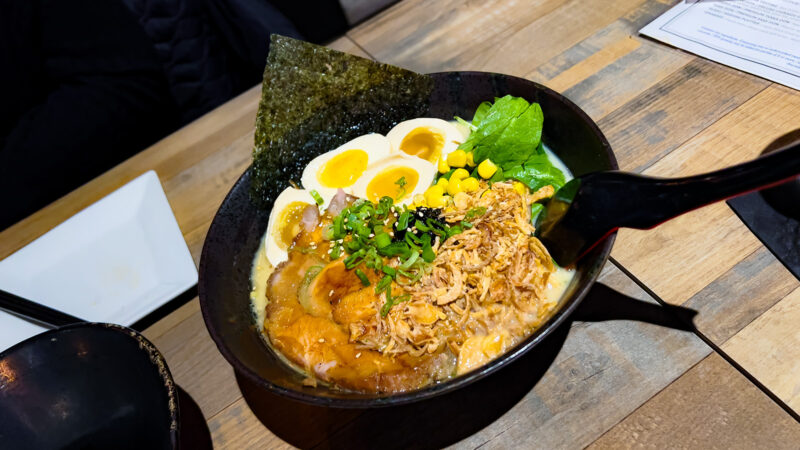 Eclectic eatery with an extensive wine list
Cox’s order: Green curry mussels, pork belly steam buns. “For some reason, I like going here on rainy days,” Cox says. “I don’t think there is a limit to the amount of steam buns I could ingest.”