What you need to know about Charlotte Restaurant Week 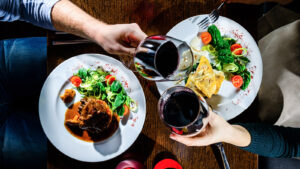 Since 2008, Queen’s Feast / Charlotte Restaurant Week has become an important promotional vehicle for area restaurants wanting to attract customers during what are typically slow traffic periods. The brainchild of Bruce and Jill Hensley of Hensley Fontana Public Relations, participating restaurants offer a three-course meal at a fixed price.

“As so many people continue to move into the Charlotte metro area, this is a prime opportunity for them to check out restaurant offerings in their new town or neighborhood,” Bruce Hensley says. “Whether you’re a newcomer or not, it’s a great way to expand your culinary horizons while spending fun face-time with friends and family.”

The Winter 2023 edition of Queen’s Feast runs from Friday, Jan. 20 through Sunday, Jan. 29. Ninety-two area restaurants (as of this writing) are participating with prix fixe menus ranging from $30 to $45, plus tip and sales tax. The number of participants is still down compared to pre-pandemic levels, which reached a high of 143 in January 2020.

“Staffing remains the greatest challenge and impediment to their participation,” Jill Hensley says.”We still have so many who tell us, ‘We just can’t handle the business Queen’s Feast brings. We don’t have the staff right now and are afraid we still won’t when the event starts.'”

Restaurant Week by the numbers

It’s not all about Charlotte. Of the 92 Queen’s Feast participants, 31 of them are not located in Charlotte. Restaurants in Huntersville, Belmont, Hickory, Statesville, Fort Mill, Rock Hill, and other surrounding areas are taking part in the ten-day event.

For the most part, you’ll pay more. When Restaurant Week began in 2008, the base price of the prix fixe meal was $30. Fourteen years later, only three restaurants are offering a $30 menu. Most (44) are at the $45 price point. 33 restaurants are offering a $40 menu, with 12 coming in at $35. “Since we rebooted in July 2021 after missing two events during the pandemic, supply chain issues and food costs have been challenges, but restaurateurs are resourceful and find ways to deal with that,” Jill Hensley says. “We added two higher prix fixe menu price tiers to give them more options around which to shape appealing menus.”

Note: the full listing of restaurants and menu offerings are continually changing throughout Restaurant Week. So check the website for the most current listings and prices.

DON’T play “restaurant roulette.” This is a heinous practice every week of the year, but seems to be particularly prevalent during Restaurant Week. Restaurant roulette is when one makes a reservation at several restaurants for the same day/time and chooses at the last minute which one to honor. This can be devastating to restaurants who have blocked out a table and made food purchases based on reservation numbers. It’s a low-class move. Don’t do it.

DO look at the menus before selecting your Queen Feast restaurants. The Restaurant Week  website does a great job of listing the prix fixe menu of every participating restaurant. Take a good look before deciding on which places to go. You’ll see what’s included for the set price, and whether they are accommodating any dietary restrictions. Some menus list supplemental dishes at extra cost, as well as other items of note. For example, The Capital Grille is not offering its Queen’s Feast menus on either Saturday of Winter 2023 Queen’s Feast – while both Silverlake Ramen locations (South End and Concord Mills) are offering a $35-for-two package.

DON’T base your Yelp review on your Restaurant Week experience. Remember Queen’s Feast is a special event. Very little of it is typical of the everyday dining experience. Hopefully, you’ll enjoy the overall vibe and food concepts enough to return. Then you can put the restaurant through your personal evaluation process.

DO tip based on the meal’s value, not the special price. Your servers and BOH workers are putting in the same effort they always do; probably even more. Don’t skimp on their tips just because you are getting a special price.

DON’T go where you always go. The whole point of Queen’s Feast / Restaurant Week is to expand your knowledge of all the diverse culinary options our region has to offer. Make it a food adventure. Have fun. You might just discover a new “go-to” restaurant.

“Queen’s Feast has become more than just a ‘dining deal’ promotion — it pretty quickly grew into a rather festive, area-wide ‘event’ twice a year that diners greatly anticipate,” Jill Hensley says. “And that still makes me excited and ready to put in the work to make each event the best it can be.”