The celebrity chef shares her top bites while in town, and who she wants to judge on Chopped 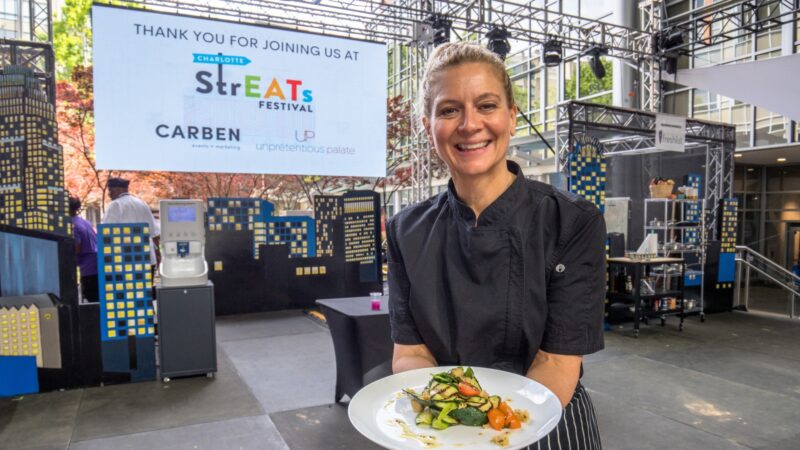 Chef Amanda Freitag cooks for the audience at the Charlotte StrEATs Festival. Photo by Grant Baldwin

Food Network star Amanda Freitag, most well-known for her role as a judge on Chopped, was the celebrity chef guest at the Charlotte StrEATs Festival, part of Charlotte SHOUT!, on April 16. Before Freitag took to the stage to lead a cooking demonstration of panzanella made with local zucchini, she met with the chefs participating in the festival’s tasting for a private breakfast. And in between, she got her first taste of Charlotte’s culinary scene, sampling the dishes from chefs around town. With a packed bag full of delicacies to take home, Freitag returned to New York with a new respect for the city. We spoke with her to learn her initial assumptions about Charlotte — and how they changed after experiencing the StrEATs Festival.

Unpretentious Palate: You mentioned your experience with Charlotte was very limited. What was your impression of the city coming in to the event?
Amanda Freitag: I was expecting a small town, maybe not a lot of chefs and maybe outdated food. Is that terrible?

UP: Well, that tends to be what people think, so it’s not terrible. Following up on that, what were your takeaways once you left after experiencing the Charlotte StrEATs Festival?
AF: It was at the absolute opposite. Meeting the chefs was a big deal for me and meeting everybody from Goodyear House [chef Chris Coleman], making burgers and high-end shrimp toast to the vegan chefs were fascinating to me. I had such a good sandwich that Ve-Go made me, a buffalo faux chicken sandwich that I had before I left, and it was so tasty. I wish I could get that sandwich here. And then doing the taste-around at the festival. I had an amazing, it was like a bay scallop ceviche, and there was yuzu, and there were these little rice crackers that were pandan flavored [from Bardo Restaurant]. … So I’m going from that beautiful, sublime bite to having the caramel cake that I literally traveled with to bring it home because I wanted another bite and I wanted to share it with my boyfriend. I was really impressed with all the food and all the chefs and how lovely everybody was and what a community they are to each other. They all knew each other. Everybody was having a good time. Everybody was relaxed. There really wasn’t a lot of pretension — there wasn’t any. And that’s hard when you put a bunch of chefs in the same room.

UP: I was going ask you which dishes stood out to you in memory, but it sounds like those are the ones. Were there any additional bites that you’ve thought about since?
AF: The sausage gravy croquettes [from Supperland]. Oh my God. First of all, the fact that they have the hutzpah to make that, I mean, that takes some serious courage and bravery, and that is probably the most decadent thing I’ve had in a long time. To put together sausage gravy and find a way to fry it is just unbelievable. So fun, so tasty, so creative. Really, really good.

UP: Were there any things you learned while here that you’ll apply as a chef yourself going forward?
AF: I love what [chef Mike Noll] did from Bardo, with those little tiny rice, they’re almost like a rice cracker but it was teeny tiny. And I want to find those in my Asian market and use them because there was such a cool crunch sensation and they were beautiful. I had never seen that before, ever. So I was really enthralled with that.

UP: You mentioned the difference in the atmosphere with the chefs, not sensing much ego. Were there other ways that StrEATs felt different than other city’s food festivals?
AF: Usually when I go to a food festival, it’s massive, and it lasts for days. A lot of times you don’t even get to see a chef that you want to see. It was nice that it was more intimate and that everybody, all the guests, got to see every chef. But then, of course, each and every chef got to see each other, which I thought was really nice too, because when you’re pulling chefs out of their restaurants at a valuable time like on a Saturday, it’s worth it for them to be able to commune with the other chefs, I think. At least see the chefs and talk to them. You don’t get to come out of your kitchen that much, so when you do, that’s what you want. You know, you want to commiserate, share — maybe somebody is going through something that you’re going through, and it’ll help you just to talk to them, whatever it may be. It’s a tough time coming back out of lockdown and restaurants open again, and there are a lot of struggles.

UP: Do you have any advice or thoughts on how a city like Charlotte becomes a more or a more recognizable food city? Charleston is so close and often gets more culinary attention, but I think Charlotte could go head to head with Charleston. How do we get that attention to the city?
AF: Hmm. It’s a good question. I think what happens even in just some other food festivals is chefs come from all over the country, so if Charlotte chefs and restaurants have a presence in those, in other places, other people can get to know them. Maybe somebody is not going to specifically go to Charlotte because they don’t think the food is as good as it is in Charleston, or in New York. So maybe Charlotte has to go to those other towns and show up.

Personalities go a long way. I would turn on the TV and I would want to watch Laney [Jahkel-Parrish of 300 East] make that caramel cake tomorrow or today, or right now, or even the whole family from the vegan places [Ve-Go and Chef Joya]. They were all amazing, and talking to them as a family was so fascinating. They’re all so lovely. I would want to know so much more about them and why they chose that journey. Why that food for them? That, to me, is so interesting, because that is really forward thinking; plant-based food is the future and somehow their mom led that journey, and then they all got on it in a different way. That’s fascinating to me; I want to hear that story. I wouldn’t have heard that story unless I went to Charlotte.

UP: When you do come back, which dish will you go for first?
AF: I really want the Goopy Burger. Come on, I’m a burger girl. So I think I would go to Goodyear House for a burger, for sure, but I would want to have that 12-course tasting menu at Bardo. I would definitely go to 300 East for dessert, and the next day, eat [Ve-Go’s] vegan buffalo sandwich. A food crawl! Then I have a bunch of Kouign ammans [from Renaissance Pâtisserie] in my purse to take home. And oh my god, that caramel, beautiful chocolate from JF Chocolat. I saved it. I didn’t share it. I didn’t bring it to Easter. I saved it for me, and I just ate it the other night. It was incredible.

UP: We love to hear that. Now that you’ve met so many, which Charlotte chefs do you hope to judge on Chopped?
AF: I want them all to show up! I really want them all to be there. The one chef that I feel like could totally do it, he made the fried chicken sandwich, he has a ghost kitchen: Corey [Jones of Mad Dash]. I want Corey actually to go up against Chef Joya, who won on stage — the vegan chef I loved. Corey and Joya. I want them in the kitchen together.

UP: Any parting thoughts from your visit?
AG: Well, I’m still trying to lose the weight from the twenty-four hours, and I can’t wait to come back.

See a photo recap of the Charlotte StrEATs Festival here.