A neighborhood spot meant for conversation, cocktails, and shared plates 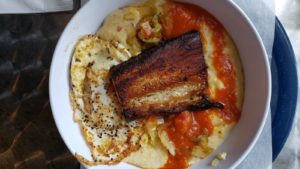 Menu items from Earl’s Grocery are available for takeout only as the concept’s owners took out the dining area to make room for more shelf goods. Kristen Wile/UP

After enduring months of the Covid-19 pandemic, sisters and business partners Bonnie Warford and Tricia Maddrey made the decision to close their longtime Charlotte restaurant Carpe Diem. The lease was up on their neighboring marketplace and cafe, Earl’s Grocery, and almost up at Carpe Diem.

“We had to close one of them,” Warford says. “We couldn’t operate at a loss for two places.”

With fine dining struggling during the pandemic and an opening in the market for grocers, Earl’s Grocery seemed like the better concept to adapt to the current economy. In fact, the change evolved naturally.

“When we were closed during Covid, we had freezers full of stuff at both places and coolers full of stuff, so we started selling our inventory to our friends because at that time, people were having a hard time getting a lot of things too,” Warford says. “Once we started doing that, we were like, ‘Maybe when we reopen Carpe, we’ll sell groceries over there.’ And then we were like, ‘Wait a second, we have a whole grocery store here. Why would we do it over there?'”

Earl’s underwent some renovations to make it a safer experience and kick off its shift towards grocer. All the seating in the front of the space has been removed and replaced with freezers and shelves for food items. The small kitchen along the side of the restaurant is no longer in use; instead, all food preparation will be done in the back of the restaurant.

The goal is to have everything a customer would need available for online ordering and curbside pickup, from affordable pantry staples like herbs, olive oil, canned goods and flour to fruits and vegetables. Meat and seafood is sourced from producers such as Springer Mountain Farms and Inland Seafood, with fish brought in, portioned, and immediately frozen to maintain freshness. SpartanNash and United Natural Foods provide a majority of the shelf-stable items.

The store will continue to have a wide selection of wine, beer, and mixers. Ahead of the holidays, Warford says they’ve added a selection of affordable gifts for home cooks and drink enthusiasts, such as bitters, artisan candies, and local goods. They’ll expand to delivery once staff gets used to the new systems in place, and hope this new business model will allow them to renegotiate their lease, which the landlord, Novant Health, has extended for a year as they try out the new business model.

“I think it has always been really hard with the way that Earl’s was set up,” Warford says. “It’s not like it was ever really a full restaurant, but we had to have a lot of people there working, so staffing it was expensive. And I just felt like we weren’t reaching our full potential with selling the items in the store.”

Another benefit of the new business model is that if the state shuts down restaurants again — which Warford believes is likely — they won’t have to close their doors entirely.