A Day in the Life: James Yoder of Not Just Coffee, Night Swim Coffee

With a new partnership, forthcoming roastery, and bevy of cafes opening soon, Yoder’s working life is not just coffee 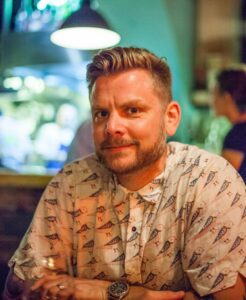 At some point during the pandemic, James Yoder decided to surrender. Not long before the stay-at-home order went into effect, Yoder and his wife and business partner, Miracle, who own Not Just Coffee, started to develop a partnership with Undercurrent Coffee owners Todd and Erin Huber. “Over quarantine and shutting our businesses down, we went back to the drawing board,” Yoder, 40, says. The coronavirus made it harder to run the cafes they already had; the Yoders and Hubers considered shelving their plans to start a new business together. It was the most stressful time in Yoder’s life.

“I remember thinking, ‘I don’t think I’ve ever felt so much like, ‘Okay, well, I am completely out of control of the situation.’ If you talk to people that know me, I’ve been called a control freak before, so that puts me in not the most comfortable situation,” he reflects. “In a way, it got us to be a little more creative.” The Yoders and Hubers pressed on with their plans, and about a year ago, they legally formalized the partnership. In August, they announced a joint brand, Night Swim Coffee, which will operate a roastery and four cafes in Charlotte. (The Hubers and Yoders co-own Night Swim and retain individual ownership over Undercurrent and Not Just Coffee, but one management team now runs all three brands.)

Though Yoder says Undercurrent and Not Just Coffee operated similarly before the partnership, the two couples have had to blend their personal and working styles to launch the joint brand and begin roasting coffee, a new line of business for both couples. (For example, Undercurrent never had caramel on their menu, but all three brands now feature Not Just Coffee’s caramel recipe.) Undercurrent launched in Plaza Midwood in 2018 with a deliberate, crafted identity, while Not Just Coffee had a scrappier start. Yoder built out a low-budget, three-stool space at Area 15 in NoDa in 2011, but Not Just Coffee has since opened six locations and become a local institution. “I think we’ve benefited a lot from some of [Undercurrent’s] structure,” Yoder says. “And I think Undercurrent benefited a lot from our years of creativity and growth and experience.”

As Yoder and his business partners prepare to open Night Swim’s first cafe, in Oakhurst, on October 23, here’s what a day in his life looks like.

5:30 a.m. A few days a week, Yoder rises early to work out at the Elizabeth location of MADabolic, a gym focused on interval-based strength and endurance exercises. The program has been an integral part of his routine for about six years — he recently finished his 750th class. “That’s one of the things that I’ve made a deal with myself that I’m not going to be flexible with,” he says, “because right now, getting my workouts in is one of the biggest things that I do for myself.”

7 a.m. On the days he doesn’t work out, Yoder gets up around 7. Of course, coffee helps him conquer the morning. (“I’m a complete addict.”) For a long time, his wife, Miracle, made the coffee at home, but since they’ve been getting up earlier, they now take turns. His home brewing routine includes a Fellow Ode Brew Grinder, a Technivorm Moccamaster (“one of the best home brewers,” which he’s relied on for about eight years), and Counter Culture Coffee — the same brand they use in Not Just Coffee’s six locations around Charlotte. Yoder delivers mugs to Miracle and their 14-year-old son, Adrian, who just started drinking coffee and takes his with a little milk and honey. Then, he retreats to the living room for reflection.

“Recently, I’ve been trying to not touch my phone for the first hour of my day,” he says. Instead, Yoder studies Stoic principles. “I try to read [the website] Daily Stoic every morning and then listen to the podcast episode, and just do a little contemplation. That’s been really good for me, to help me have a mindful structure to my day.” (Contrary to popular belief, Stoicism is not about purging all emotion but is instead a holistic ethical philosophy rooted in logic. Happiness, the Stoics posit, lies in accepting what comes, without being driven by the fear of pain or pursuit of pleasure.) The ritual has given Yoder tools and strategies to respond to daily challenges: “Life in general can be pretty stressful, and as a business owner, we deal with so many things, and so many of those things are hard to prepare for, so I like the idea of having a philosophy or an approach that can help you deal with those things, especially now. This is absolutely the most that I’ve ever had on my plate at one time.”

9 a.m. During the pandemic, Yoder, Miracle, and their two teenage boys would work together from home. “Our dining room table,” he says, “always tends to get stacked up.” And everyone working from their cozy house in Optimist Park could get difficult. Now, Yoder likes to pack up and work from his shops around town. On the day I spoke to him, he started at the Not Just Coffee in Atherton Mill, where he worked for a couple of hours, then picked up his son and headed to Undercurrent in Plaza Midwood for a while, and finally crossed Uptown to attend a meeting at the Jay Street Not Just Coffee with the Night Swim food team “to finalize costing and menus, so we can get those designed and printed.” (Miracle’s workday looks similar. She handles Not Just Coffee’s financials and works closely with their accountant, but both Yoders bounce around to the different shops and enjoy flexible schedules.)

6 p.m. “We take turns cooking dinner. Miracle’s got the meals that she kind of likes to cook, and I think she’d be OK with me saying I’m probably the better cook. But she cooks very well, too. I enjoy cooking, but I’ve gotten away from it a lot more as I’ve gotten busier. Last night I did a gochujang salmon. I made some quick-pickled cucumbers and some fried sticky rice and some broccolini and just made a Korean bowl.” The Yoders lived in Italy for about three years before they moved to Charlotte, so Italian food makes regular appearances on their table too. “We eat a ton of pasta — probably more pasta than we should.”

Yoder prioritizes daily family time, including with 26-year-old stepdaughter Destiny, but, he says, “We realize we’re all on our phones way too much right now. My wife and I are always talking about, ‘We need to get the family off our phones and take them in the woods and go hiking or something.’ So we try to break away sometimes.” (A few weekends ago, for example, the couple took a day trip to Harper Creek Falls in Caldwell County.)

9:30 p.m. “My ideal time on most weekdays would be to go to bed around 9:30. Usually I’m in bed first. The boys will stay up ’til whatever time. Probably significantly later than me, but at this point, they’re younger. They have more energy.”

Disclosure: The links above include Amazon affiliate links, which means Unpretentious Palate earns a small commission on any sales of the items above. Since nearly everything is available on Amazon these days, this has no influence on which items we feature.