Oscar Johnson of Jimmy Pearls is Chef of the Year 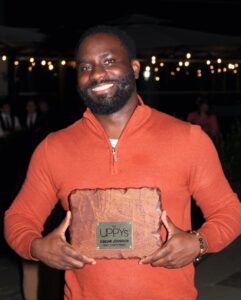 On Monday night in Raleigh, chefs across the state competed in the National Restaurant and Lodging Association’s annual Chef Showdown. Chefs had to earn their place at the event through a series of regional rounds, and Charlotte sent several chefs — both savory and pastry. With a dish that blended Southern and African heritage, chef Oscar Johnson took home the title of NCRLA Chef of the Year.

“The outpour of support amongst my family and peers, the atmosphere, everything just felt like it was set for me to take home the title,” Johnson says. “I affirmed this victory from the beginning because I wanted it. This distinction means a lot to me — not only as personal achievement, but a win for my elders that have guided me and taught me everything I know. This win is for Jimmy Pearls, The 757, the Queen City.”

Johnson is the co-owner of food truck Jimmy Pearls with chef Daryl Cooper. Both grew up in the 757 area code of Virginia, Hampton Roads. Their food truck infuses the dishes of their childhoods — like Yakamein and seafood — with Southern flavors. The chefs will be the guests at our September Plated Pop-UP series dinner, serving a coursed meal in a fine dining setting.

Johnson served oyster and grits soufflé with kontomire stew, a filet of kanpachi fish, and a beet chermoula. The winning chefs are named culinary ambassadors for the state. At the event, chefs in contention to be named NCRLA’s Chef of the Year sampled dishes for attendees. Those attendees were able to vote for their favorite dishes, and Charlotte chefs earned the people’s choice awards in both savory and pastry categories: chef Myles Scaglione of PARA, and pastry chef Savanna Broder of The Ballantyne Hotel.

Johnson is rapidly gaining recognition as one of the city’s most promising talents; he was named Unpretentious Palate‘s Chef to Watch in 2021 at the first annual UPPY Awards.