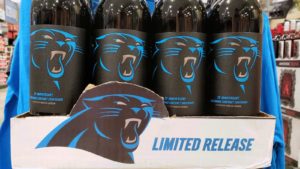 The Panthers are celebrating 25 seasons in the Carolinas with an anniversary release of California cabernet sauvignon from by Wine by Design. With the Carolina Panthers Reserve Collection, Panthers fans who prefer wine to beer have a fitting tailgate companion.

The wine is sourced from sustainably grown vines in the cabernet-growing regions of California and aged in oak.

“The Panthers Cabernet Sauvignon is full of fall flavors like blackberry, plum, and black cherry,” says Natalie Stewart, the sommelier at Uptown seafood restaurant Fin & Fino. “Robust like our defensive line, this wine pairs perfectly with that tailgate burger or barbecue chicken wings.” Her tasting notes come in preparation for a private release tasting at Fin & Fino later this week.

For those looking to get their paws on this specialty wine, head down to the stadium this season, where it will be poured by the glass. If you can’t make it to a game in person, you can also pick it up at your local Harris Teeter and in select restaurants around the city. If you’re hosting a Panthers’ viewing party, you can also have bottles shipped directly to your home from the Panthers’ website. A bottle retails at $19.99. —Travis Mullis