Why we’re glad Dish is staying the same

Not every restaurant is chef-driven, and that’s a good thing 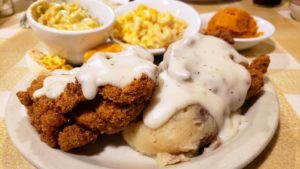 Last night, we packed up J.J. and rolled on down for dinner at Dish in Plaza Midwood. The restaurant reopened a week ago after getting a bit of a facelift from its new owners, including operating partner Lewis Donald of Sweet Lew’s BBQ. Former owner Penny Craver was ready to retire, and found in Donald someone willing to continue to legacy of the restaurant she’d built.

Often, when restaurants close or are sold, the changes come with bad blood. Craver, however, has done her best to ensure the transition was smooth, staying on for a few weeks after the sale and including every recipe in it.

And the restaurant looks as though it will only get better. Aside from the cosmetic changes of fresh paint and new windows bringing in more natural light, Donald is improving the restaurant’s sourcing, too. I could taste the difference last night, even though the recipes stayed the same.

In a city that’s fighting to become one of the chef-iest out there, I’m glad we still recognize the importance of a place like Dish. Modern Southern restaurants might be Charlotte’s culinary reputation, but Southern comfort remains its soul. —Kristen Wile

Our Editor’s Dish stories are taken from our newsletters. Want to get thoughtful content like this delivered directly to your inbox twice a week? Sign up here.