The best home of Lowcountry eats in Charlotte

Closures brought the opportunity to paint, remodel, and renovate 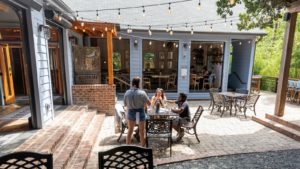 The patio at The Goodyear House underwent an expansion. Photo by Peter Taylor/Peter Taylor Photography

As restaurants slowly welcome guests back into dining rooms under phase 2 of North Carolina’s three-phase approach to reopening, many of them will have a little extra shine. It’s a difficult decision for a restaurant to close their dining rooms to make updates and tweaks, but with the recent mandated closures due to Covid-19, restaurateurs around town have taken advantage of the chance to do a little upkeep.

“We had some deferred maintenance that we had been planning on doing,” says Kindred Restaurant owner Katy Kindred. “With the forced closures, there seemed like no better time — we had the whole place empty.”

At Kindred, the Davidson restaurant Katy owns with her husband and chef Joe Kindred, the hardwood floors were refinished and the tile repaired. They updated the sound system, and repainted every painted surface in the restaurant.

The partners at The Goodyear House, which opened in NoDa not long before the pandemic hit, took the time to lease outdoor space from the building next door and expand their patio. They were considering options for that space as they prepared to open initially, including creating a separate concept there, perhaps a take-out only fish camp. However, with the high demand for outdoor tables, they decided to move quickly and expand their outdoor dining space.

“This was in the plans, but we sped it along to make sure that we could serve our guests in an environment they were comfortable in,” executive chef Chris Coleman says.

Bar/lounge Lost and Found added private booths to its “living room” area, while Graham Street Pub & Patio has been working on installing a cover for its patio.

At Italian restaurant Mama Ricotta’s, all of the framed photos of owner Frank Scibelli’s family were taken down and reframed. Dilworth Tasting Room updated its patio, adding flower walls and commissioning Darion Fleming to paint a mural. Many of the city’s mainstay restaurants have fresh paint, including Dressler’s at Metropolitan, The Porter’s House, and Rooster’s in SouthPark.

At King’s Kitchen and 300 East, booths and tables have gotten a refresh, and the walls have gotten fresh coats of paint. The King’s Kitchen underwent renovations earlier this year, which included updated bathrooms, new upholstery, and sliding floor-to-ceiling windows that were damaged by instigators following the Uptown protests.

Growler’s Pourhouse on North Davidson Street became a woodworking shop, where co-owner Jeff Tonidandel and staff assembled the tables for their upcoming restaurant Supperland in Plaza Midwood. They also built cabinets for Growler’s and Haberdish, thanks to the skills of one of the bartenders at Growler’s who happens to be an expert woodworker.

“We had some employees that needed stuff to do, so we just were trying to keep people employed and keep people working,” Tonidandel says.

The improvements go beyond restaurant dining rooms, however — the team at Kindred also rebuilt service stations, added a new ice machine, and put a new vent in the kitchen above the dish station to make the space more comfortable for the staff. Dilworth Tasting Room added a larger exhaust fan in their kitchen.

The fresh sparkle is helping to create a sense of excitement around reopening, Katy Kindred says. She and the Kindred staff gathered for a Champagne toast last weekend to celebrate the hard work the staff has put in during the tough times and reopening to the public.

“Obviously there’s a lot of pain and it’s just very difficult for everyone,” she says. “But we’re choosing to see the gifts. And definitely one of them is opening, even if it’s partial and restricted and a little bit different. It’s just going to be wonderful to do what we do best again.” —Kristen Wile