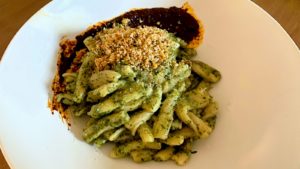 Restaurants that were almost ready to begin service before Covid-19 are opening their doors at half-capacity, and doing so mostly unnoticed as many diners choose to remain home. The openings come with increased cleaning protocols, paper or scannable menus, and socially-distant tables, all designed to help keep diners safe. Here are some of the openings you may have missed recently. —Kristen Wile

Alchemy
A new vegetable-focused restaurant opened its doors on the campus of creative hub C3 Lab, with a dining room temporarily expanded into the private event space to allow for social distancing. Former Napa on Providence chef Ken Aponte serves vegetarian and classic versions of traditional menu items, such as burgers and Cuban sandwiches.

Bentley’s
The high-end restaurant on the 27th floor of an office tower on College Street has a new ground-level home in South Park. When Bentley’s took over the former Georges Brasserie space in Piedmont Row, the restaurant got a more modern interior. Expect the same high-touch, highly attentive service that made regulars of some of the city’s most successful businesspeople. More on this to come.

Camp North End’s food stalls
Three new food stalls opened along the North Graham Street side of Camp North End, in what the mixed-use campus is calling the Gama Goat Building, in late June. The name comes from a U.S. Army vehicle once assembled there. A ramen shop, a new concept from the owners of Sabor, and the first brick-and-mortar version of food truck Bleu Barn Bistro are taking window orders for diners to enjoy in the open-air courtyard.

The Culture Shop
A new cheese shop opened on Hawthorne Avenue, the street that divides the Plaza Midwood and Belmont neighborhoods. Stop by to grab a cheese plate, charcuterie, sandwiches, and wine or beer — anything from Miller High Life to a local IPA. You can also pre-order online to have your food ready for pick-up when you arrive.

The Degenerate
This new NoDa spot is a modern take on a sports bar, complete with TVs and dark decor. The menu, however, includes items such as grilled calamari, risotto, and pan-seared gnocchi as well as wings, curried lamb tacos, and chips, and the craft cocktail list spans far beyond a well gin and tonic.

The Fairwood 226
With a lounge vibe and indoor-outdoor dining room, this bar is as suited as possible to opening during a pandemic. Order mac-and-cheese topped with brisket or barbacoa, a flatbread, or sandwich to enjoy with a few drinks.

Fine & Fettle
Former Dot Dot Dot executive chef Daniel Wheeler left the members-only bar for the new Canopy Hotel in SouthPark. There, he is serving a broad menu of dishes in the lobby restaurant that includes everything from typical hotel restaurant fare like wings and sliders to more adventurous items such as guinea hen and pork cheeks.

Grinning Mule
Just off Commonwealth Avenue past Plaza Midwood is a new neighborhood hangout. Grinning Mule serves snackable plates from Scott Walker, the opening chef of Heist, and cocktails from mixologist Bob Peters. You can find dishes to accommodate most special diets, and outdoor seating is plentiful.

Leah & Louise
Greg & Subrina Collier planned to open their juke-joint inspired restaurant to the public the same week an order came down from Raleigh shutting down restaurant dining rooms. It’s now open at half capacity, welcoming guests into a space that evokes the Colliers’ Memphis upbringings. On the menu are creative Southern- and Afro-inspired dishes from James Beard Award semifinalist Greg Collier that you won’t find elsewhere.

Little Mama’s
The newest concept from FS Food Group (Midwood Smokehouse, Mama Ricotta’s, Paco’s Tacos, Yafo Kitchen) centers on the style of Italian cuisine popular in the northeastern U.S. during the 1970s. Entrées can be ordered for one or family-style, and include chicken parm, broiled chicken and broiled fish. The SouthPark restaurant is in the old Zebra space.

Scratch House Chicken
Currently a ghost kitchen operating out of sister concept The Goodyear House, Scratch House Chicken’s fried or grilled chicken sandwiches, fries, and fried chicken bites are only available for delivery or take-out. For a healthier option, you can also order a salad topped with chicken.