The trout was cooked just right, tender with a crispy skin. The ingredients on the plate showed so much personality. The technique was impeccable. Despite being known as a cocktail bar, Dot Dot Dot showed it has got some serious cooking muscle, too, at our Meet the Chef event on Sunday night. Executive chef Daniel Wheeler joined the team in the spring, and we wanted our subscribers to get to know him better.

Wheeler was the kick off chef in our Meet the Chef series, and his four-course menu took guests through his childhood, past, present, and future. Dot Dot Dot owner Stefan Huebner paired a cocktail with each course. All of the Unpretentious People who attended left planning to come back for a meal at Dot soon (including me!).

See photos of the event and Wheeler’s courses below, as well as what inspired them. Don’t forget, getting exclusive invites to events like this are just another perk of being a paid subscriber to Unpretentious Palate. Want to make sure you get the chance to attend the next one in addition to all of our expert content, restaurant reviews, and resources? Subscribe today and get one week free. —Kristen Wile 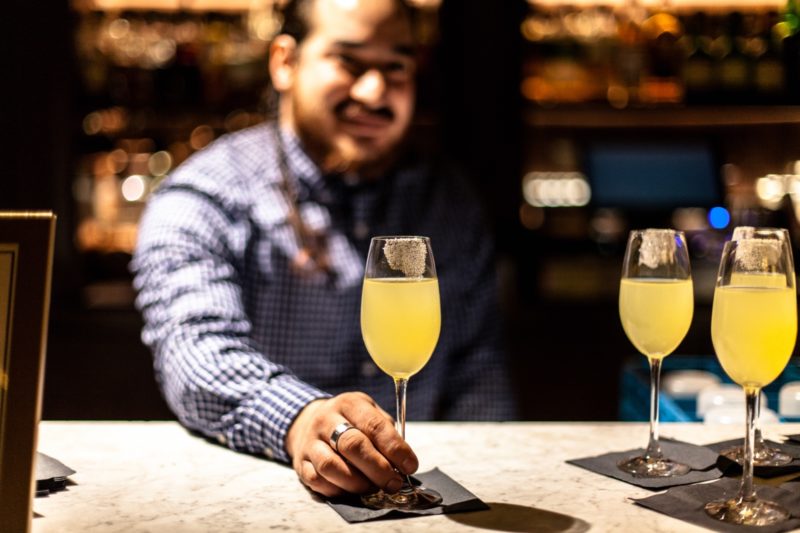 Dot Dot Dot bartender Andrew offers guests a welcome punch upon their arrival. Each of the pairings for the evening was made with North Carolina Spirits. The Summer Gin Punch used Sutler’s Gin, lemon, orange, and Champagne. Photo by Jonathan Cooper. 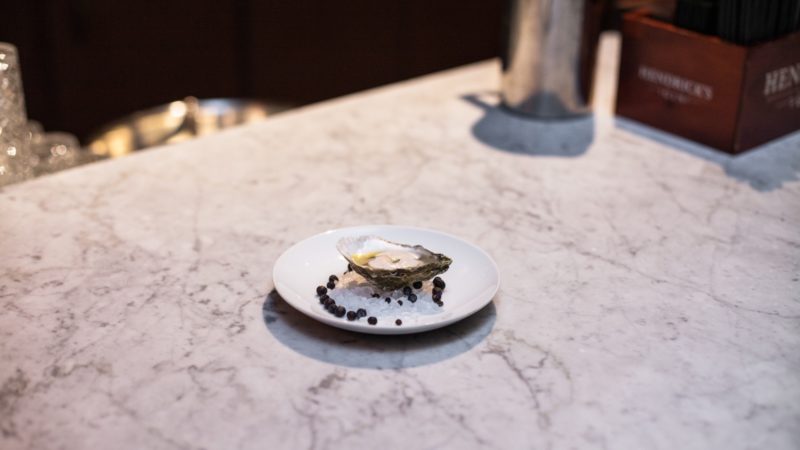 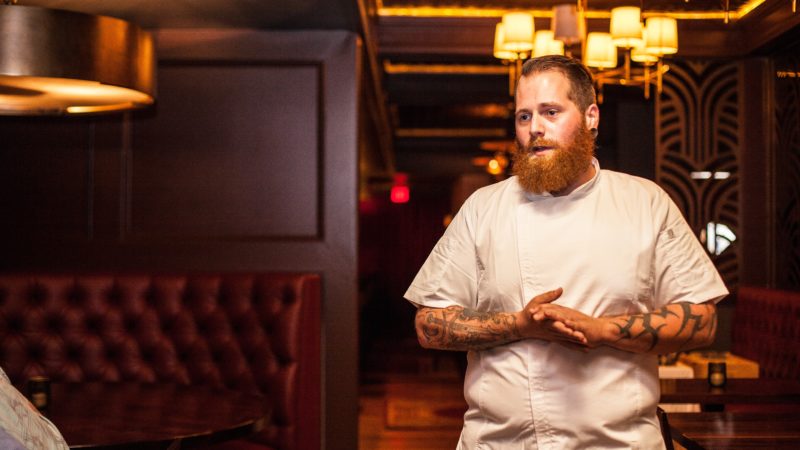 As guests enjoyed each course, executive chef Daniel Wheeler discussed how the dish fit in with the theme of the evening. Unpretentious Palate subscribers get the chance to attend exclusive events like this, where chefs take you on a journey through their culinary careers over a coursed dinner. Be sure you’re on the invite list by subscribing here. Photo by Jonathan Cooper. 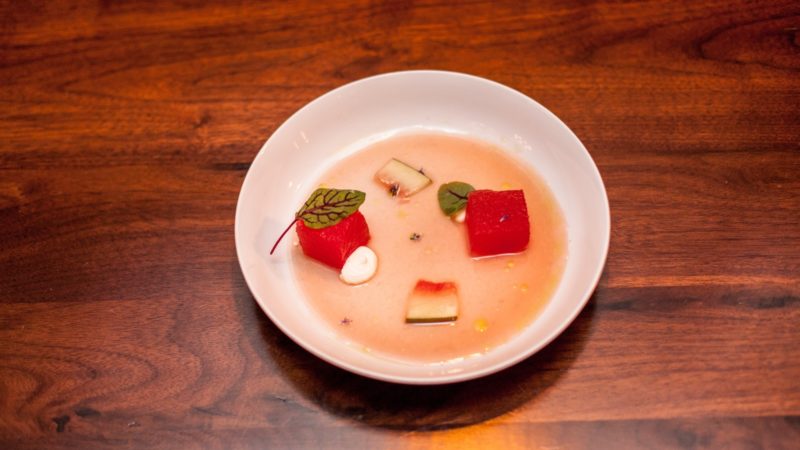 The first course, which represented chef Daniel Wheeler’s childhood, was a watermelon gazpacho. The inventive dish was made with vodka-pressed watermelon, watermelon kombucha, pickled watermelon rind, basil olive oil, and goat cheese. Wheeler explained to the diners that growing up in the South, summers meant eating watermelon by the slice. Photo by Jonathan Cooper. 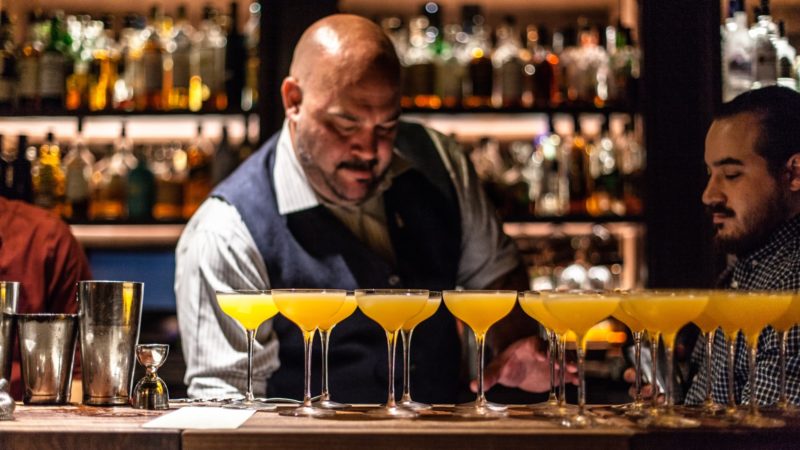 Stefan Huebner prepares to serve the cocktail paired with the first course, called From the Patch. The drink was made with Cardinal gin, cantaloupe, lemon, salt, and cayenne pepper. Photo by Jonathan Cooper. 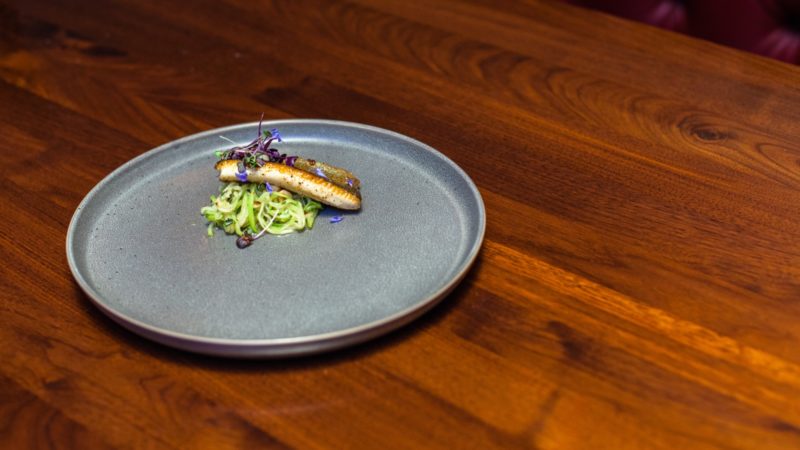 The second course of the evening centered around an influence for chef Daniel Wheeler’s cooking. Due to his love of street food and Asian flavors, he served this miso-glazed trout with a Mai Farms chayote salad. The dish was a crowd favorite. Photo by Jonathan Cooper. 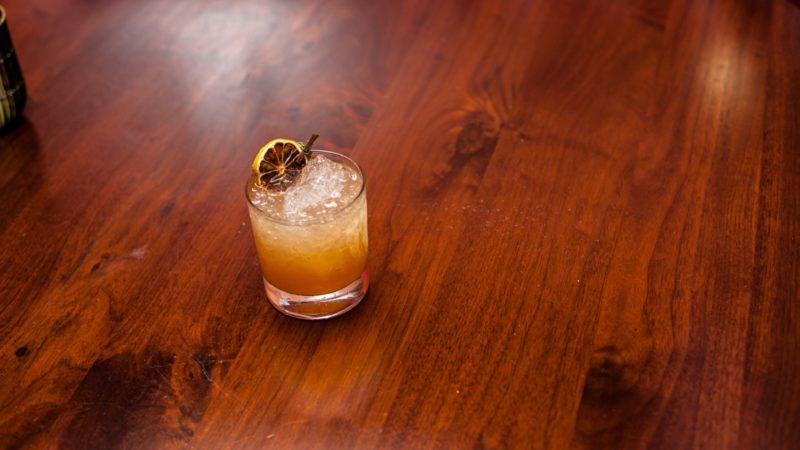 Paired with the miso-glazed trout was a Corner Creek bourbon cocktail, with peaches, bitters, sugar, cinnamon, and mint called the Bourbon Smash. Photo by Jonathan Cooper. 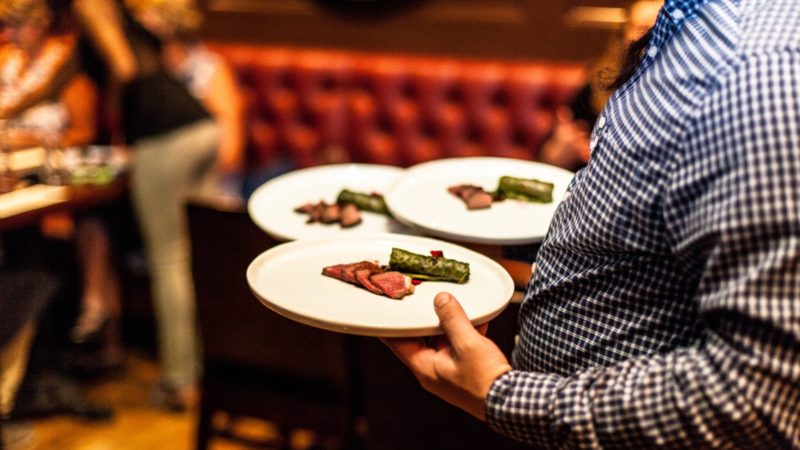 To indicate his present cooking style, chef Daniel Wheeler served a cold-smoked Joyce Farms strip steak with a fermented Carolina malted barley-stuffed dolmade. The dish used all local ingredients, and the malted barley came from a friend of Wheeler’s who works at a brewery. Photo by Jonathan Cooper. 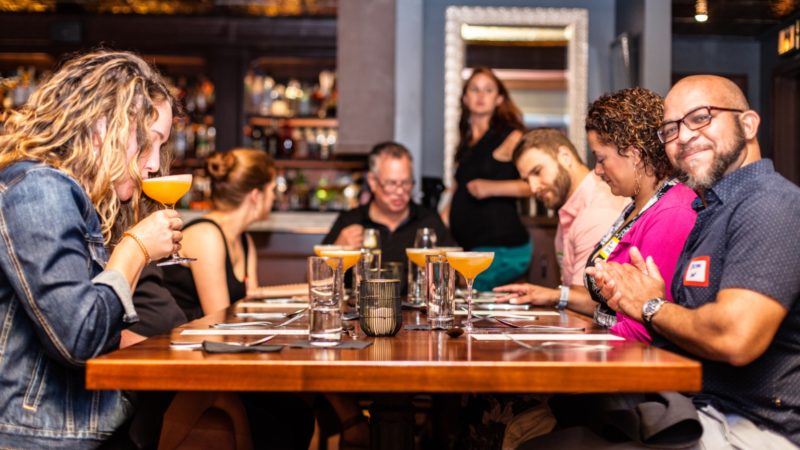 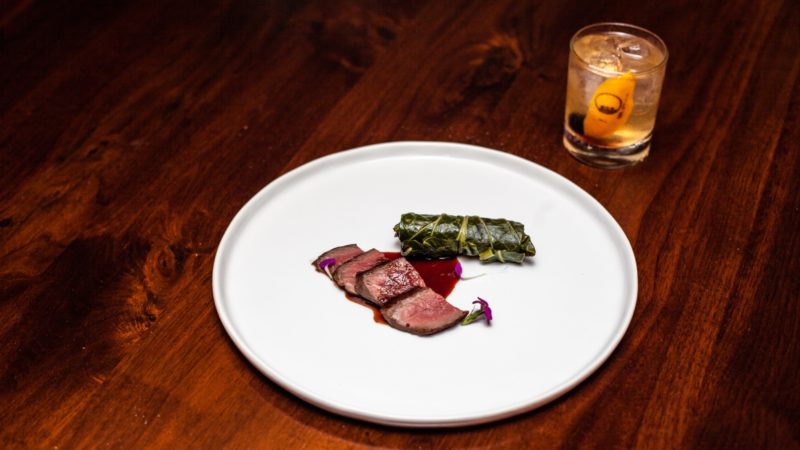 The cold-smoked strip steak was served with a deconstructed old fashioned, made with Copper Barrel moonshine, bitters, orange oleo-saccharum, and sherry. Photo by Jonathan Cooper. 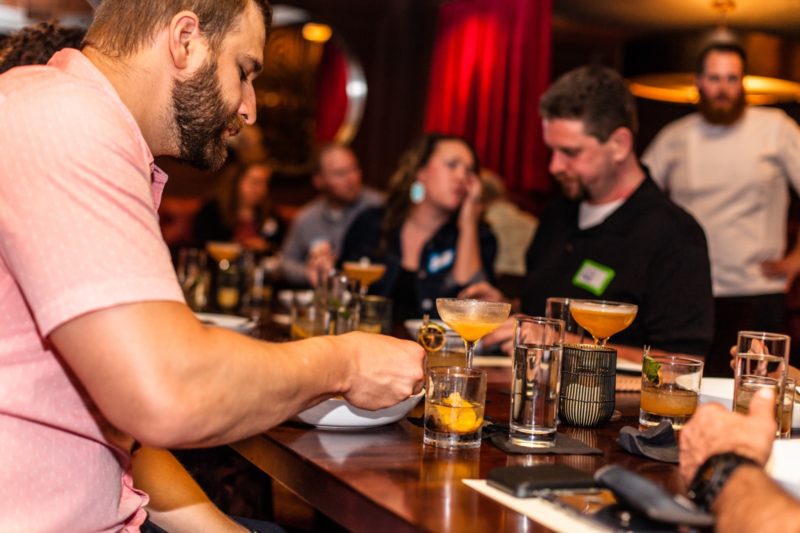 Guests were treated to a cocktail pairing by Dot owner Stefan Huebner with each course. Huebner and Wheeler explained what they were serving and answered diner questions with each. Photo by Jonathan Cooper. 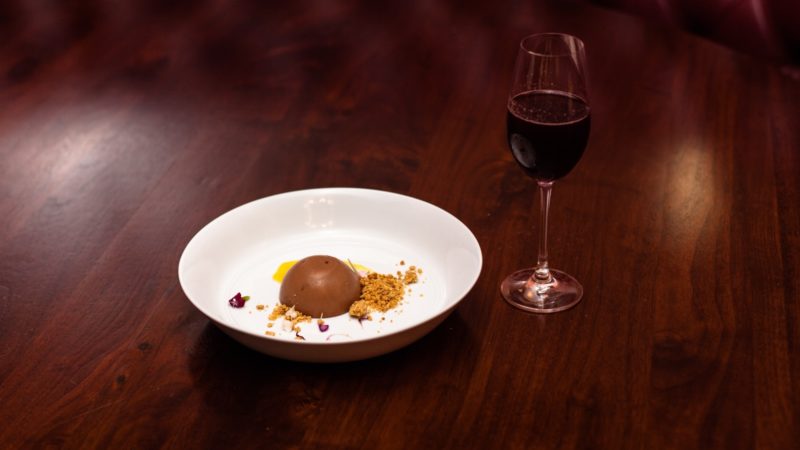 Chef Daniel Wheeler shared he has been adding dessert options to Dot Dot Dot’s menu while explaining his final course, which represented his culinary future. The dish was a chocolate semifreddo with pistachio candied orange, white chocolate crumb, and orange fluid gel. Photo by Jonathan Cooper. 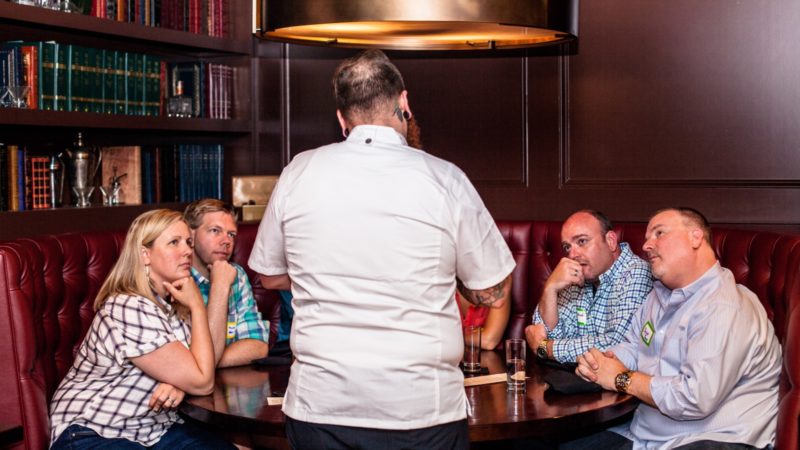 As part of Unpretentious Palate’s Meet the Chef series, diners were given ample opportunity to chat with executive chef Daniel Wheeler and ask him questions about himself, his cooking, and the restaurant. Photo by Jonathan Cooper. 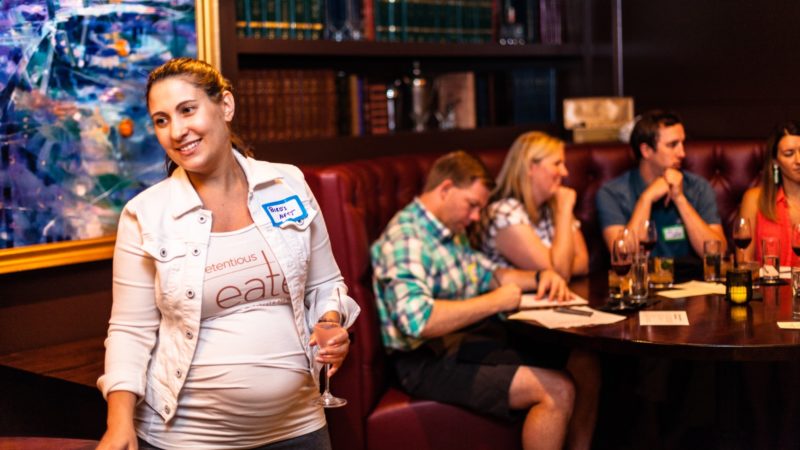 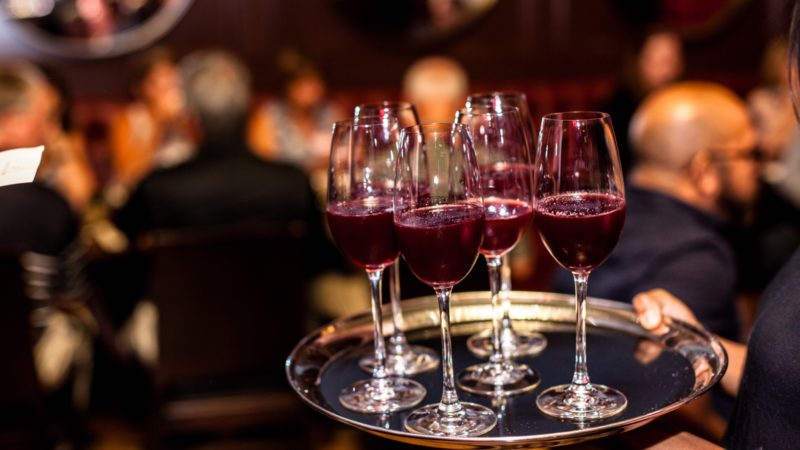 The final drink of the evening was a house-blended vermouth with Pasubio, Amaro Montenegro, and blueberry. Photo by Jonathan Cooper. 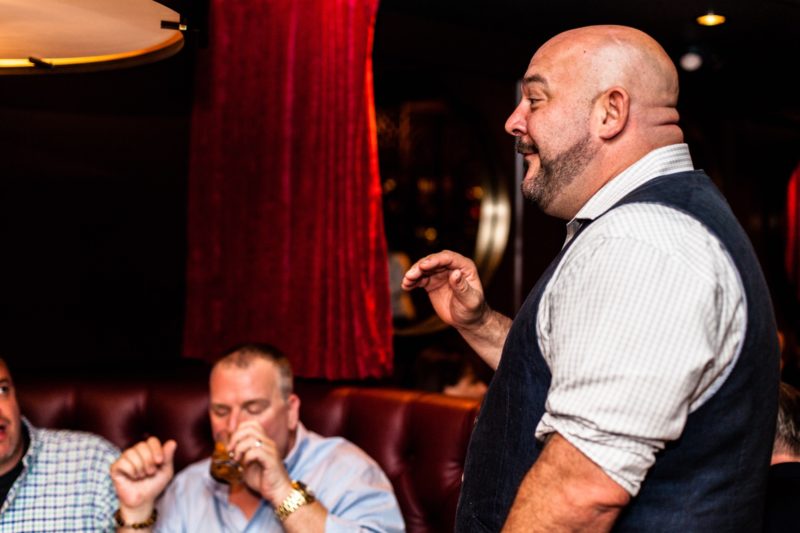 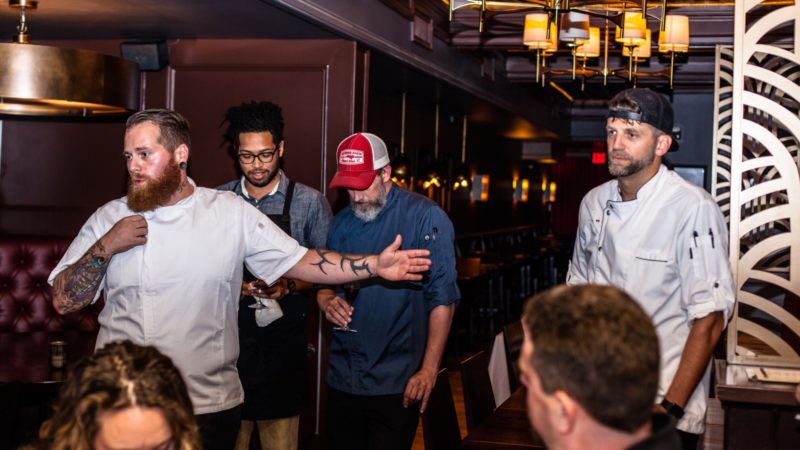 Dot Dot Dot executive chef Daniel Wheeler introduces the chefs that came in to help him tell the story of his life and career through food. Photo by Jonathan Cooper. 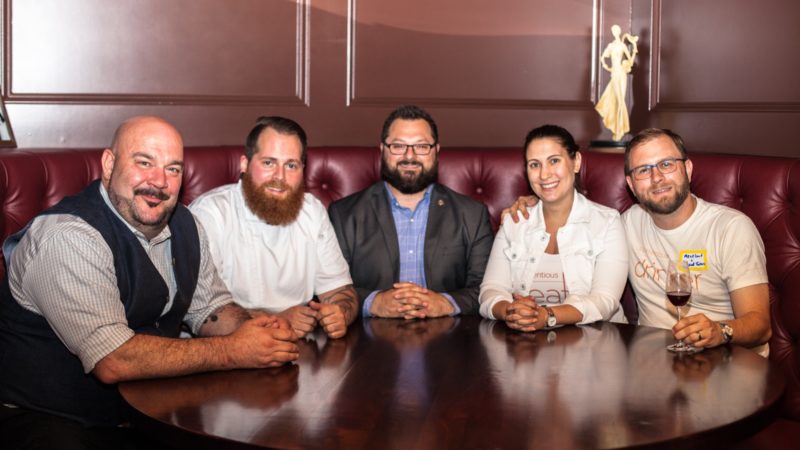