Owners of Sabor, Salud to appear on Food Network

The siblings will compete on Family Food Showdown 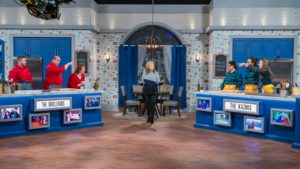 The owner of Sabor and Three Amigos, Dalton Espaillat, and his younger sister Darielyn Glunt, co-owner of Salud, will compete on The Food Network next week. The two, along with their cousin Odette, will make up a team on Family Food Showdown. On the show, teams of three family members compete in a cooking competition against another family. The winning team gets $10,000.

Espaillat’s Sabor Latin Street Grill now has a dozen locations. It’s become popular for its fast-casual service and flavorful dishes, as well as its weekly specials (including $1 tacos on Tuesday). The menu is flexible to many diets, and can be a good healthy option if you order correctly.

Salud is a popular bottle shop in NoDa, which also has its own small kitchen.

The show, hosted by Valerie Bertinelli, airs on Monday, April 1 at 10 p.m. on The Food Network. Judging the contest are Daphne Oz, former co-host of The Chew, and chefs Isaac Toups and Bryan Voltaggio. —Kristen Wile