These can’t-miss dishes celebrate the season 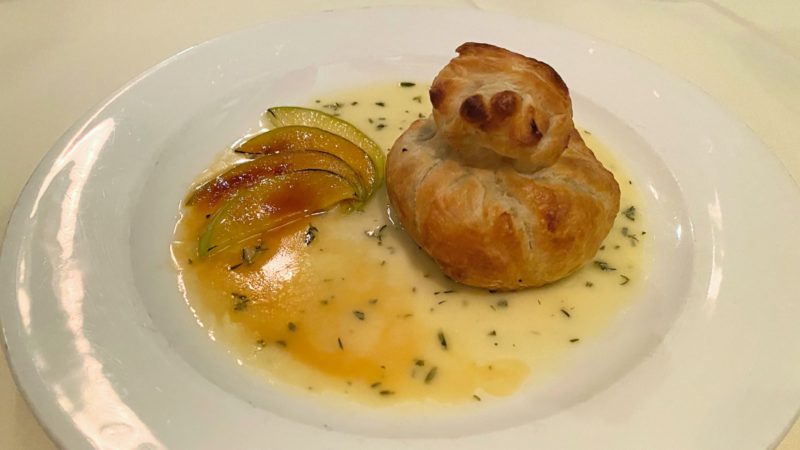 When the beggar’s purse appears on The Fig Tree’s menu, you know it’s fall. Kristen Wile/UP

Each season brings a wave of fresh ideas to restaurant menus. Fall is a time to savor squashes and apples, and welcome heavy, braised meats back to our tables. Here are the best fall dishes our staff has sampled around town so far this season.

Peter’s favorite dishes from Chef Sam Diminich’s three-course meals are the squash soup, Korean chicken, and short rib — it’s hard to pick one item when Diminich aces nearly every course. Writer Anita Skogland also named Diminich’s soup as her best bite of the season, and it’s definitely up there on my list, too. Diminich’s dinners are delivered directly to your door, and are as seasonal as it gets, with each day’s menu selected based upon what his local farm partners have available. The squash soup is decadent and seasoned to take advantage of squash’s natural nutty flavors.

There’s something about crisp air that makes me crave braised meat, and as a writer, I love a good story. At The Grinning Mule, a new neighborhood restaurant off Commonwealth Avenue in Plaza Midwood, mixologist Bob Peters is behind the bar, but he’s lending his family’s cooking talents to the menu. The bone-in pork shank comes doused in a barbecue sauce that’s Peters family secret — one that’s been shared with The Grinning Mule’s kitchen.

The debut menu at Counter- is titled “Terroir,” and is an ode to North Carolina. Justin’s favorite dish of the season is simply titled “Corn,” and is an homage to the indigenous peoples of the state. A corn cake topped with crayfish, butter, and cognac, the small bite will be one you will remember.

A beggar’s purse is like a pocket pot pie, stuffed with whatever you have in your kitchen. At The Fig Tree, thyme butter sauce is a warming addition to this puff pastry-wrapped appetizer, while apples, onions, walnuts, and gorgonzola cheese make a harmony of fall flavors in the filling. Enjoy the dish on the historic Elizabeth restaurant’s all-season patio, or the new lower patio in the restaurant’s front yard.