Our 7 favorite fall cocktails around Charlotte 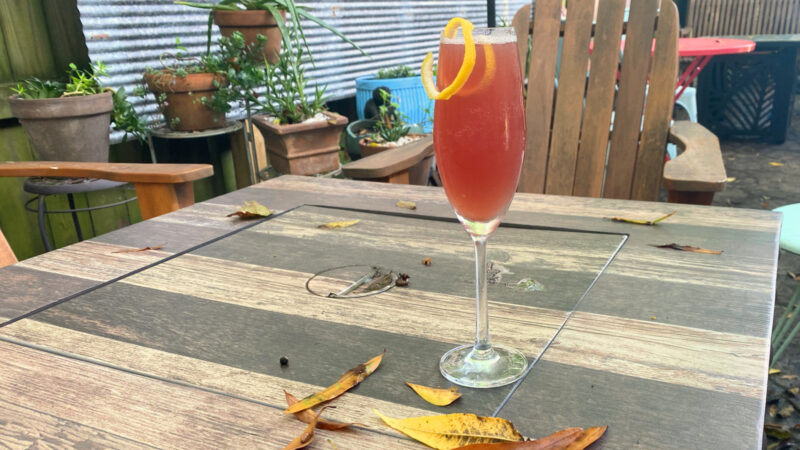 The Pear French 75 at The Artisan’s Palate. Kristen Wile/UP

Pumpkin spice may be the first indication that fall is approaching, but we prefer to celebrate the season with tastes of bourbon, bitters, and maple. As fall cocktail menus drop throughout the city, we’re sharing the best drinks to toast to the cool weather.

Dot Dot Dot, Montford Park
The Hot Box
A classic on the menu at this cocktail bar hidden at the back of Park Road Shopping Center since its opening, The Hot Box is a show as well as a cocktail. Made with Dot Dot Dot’s Knob Creek barrel pick, Scotch, sweet vermouth, and bitters, the drink is smoked inside a wooden box using pecan smoke. The pecan smoke combined with the combination of high-proof booze makes for a complex cocktail that will warm you right up.

The Crunkleton, Elizabeth
Barrel-Aged Vieux Carre
Barrel-aged cocktails have a smoothness to them that can only be achieved by rounding out the flavors inside a barrel, and The Crunkleton’s selections are a fine example. The Vieux Carré is a classic New Orleans cocktail built on rye whiskey that takes on a hint of bitter sweetness from Carpano Antica, cognac, and Benedictine liqueur.

Billy Sunday, Optimist Park
Anything Besides Water?
Bourbon paired with house-made fennel bitters creates a unique flavor profile for this cold-weather cocktail. With the addition of Bonal, an herbal apertif, and amaro, this cocktail is equal parts bourbon sweetness and herbaceous bite, smoothed over by notes of fennel.

KiKi Bistro, Plaza Midwood
Last Mariachi
With anise, cloves, and cinnamon, five-spice gives any dish or drink the scents of a fall celebration. At KiKi, mixologist Kel Minton creates a five-spice honey to add autumn notes to this drink, made with reposado tequila, cachaca, and pineapple.

The Artisan’s Palate, NoDa
Pear French 75
With its delicate bubbles, citrus notes, and bright gin base, the French 75 feels like a warm-weather drink. The addition of pear cordial to The Artisan’s Palate’s offering makes the drink feel more substantial — and right in season.

Haymaker, Uptown
Benton’s Old-Fashioned
We’ve all got to put on a little weight to make it through the cold winter, right? A classic from Asheville sister concept The Marketplace, this old-fashioned features bourbon infused with bacon fat. Maple sweetness, bitters, and orange complete the cocktail.

Fin & Fino, Uptown
Biggest Bull$hitter
The yearbook-themed drink menu gives superlatives to staff members at Fin & Fino, with fun categories such as the one this cocktail is named for. A spirit-forward sip with hints of nutmeg, cinnamon, and banana, give banana bread notes to this fall creation.