On the backs of restaurants

The problem with Charlotte’s charity culture 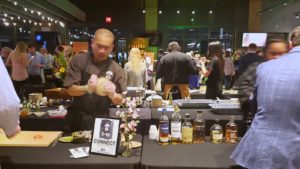 Taste of the Nation Charlotte takes place each spring for No Kid Hungry. Kristen Wile/UP

It’s a common Charlotte scene. An established charity is hosting an event that promises all-you-can-eat tastes from the best restaurants in the city. Guests are dressed in their finest, holding small plates, making their way from one station with samples lined along black tablecloths to another. Meanwhile, the chefs behind these tables are heads down, doing their best to handle the volume while interacting with guests to pitch their restaurant at the same time. Though they did not buy a ticket to the event, these chefs are also paying to be here.

Most restaurants are not, despite common perception, high-profit ventures. Working in them is far from glamorous, and even further from lucrative. Yet many of Charlotte’s charity events have come to rely on free labor, and even donated food costs, from restaurants and chefs to sell their high-priced tickets.

Ashley Bivens Boyd, chef and co-owner of 300 East, says she’s asked daily to participate in an event or donate a gift card. Paul Verica, chef and owner of The Stanley, says he gets requests to participate in 20 to 30 events a year, with gift card requests two or three times a week. In his first year in business at The Stanley, Verica says, he’s donated $6,000 worth of products and labor to charity events.

“Everybody thinks I’m a fucking millionaire, making all this money because I own a restaurant,” Verica says. On a good month, The Stanley runs on a 10 to 12 percent profit margin — far from making Verica a millionaire.

For events of around 300 people — the ones that promise chef tastings from the city’s best restaurants — prep time can take anywhere from 5 to 10 hours for a chef-driven restaurant. Making the most of the event depends on impressing the guests, so doing something simple isn’t a great option. These events also require two staff members to be out of the restaurant serving guests, as well as special equipment and food costs. Once you add everything up, Verica says, you could easily be spending $1,000 for one event.

With more and more events competing to sell tickets, some non-profits have started offering stipends for chefs to cover food costs, though many still do not. As restaurants have become more selective about which events they take part in, smaller places prefer to take part in events that help offset their cost of participating.

“In general, restaurants have a super narrow profit margin, so when they’re already donating the time and the ingredients, I feel like it’s unfairly on the backs of the restaurant and the owner when everything is donated,” Boyd says. “So when they provide an ingredient stipend that’s extremely helpful — and it shows good faith that they don’t just expect small businesses to shoulder the burden.”

Boyd, who is known for her desserts, says doing desserts helps ease the cost a little bit, as the ingredients are much cheaper. Still, prep can take four to six hours for larger events with a couple hundred people — labor the restaurant is paying for.

“I’m not sure why we continue to build fundraising events on the backs of people who make absolutely nothing,” says Kris Reid, executive director of the Piedmont Culinary Guild.

Reid points out that if you were to ask a plastic surgeon to give away 100 free facials, they’d laugh at you. Yet that’s what non-profits, often out of a simple lack of understanding, repeatedly ask chefs to do with 300 meals instead of facials. Weekend events are especially difficult, and Verica says he tries to avoid events on those nights, because he should be in his restaurant.

“When I say no, people don’t understand that,” Verica says. “Even though I’m not physically cooking as much anymore, I think people still expect to see the chef in their restaurant.”

Mixologist Amanda Britton of Mint Street restaurant Bardo points out that when you’re a bartender and take part in a Friday or Saturday event, you’re also passing up your most lucrative shifts of the week. Bartenders can often get their base spirit covered by a liquor distributor, but labor, syrups, citrus, and anything else needed for their cocktails come from their pocket or their restaurant’s.

For Britton, there’s a greater good that goes beyond supporting a single charity. She sees education as a large part of her responsibility as a bartender. Events where she can interact with guests give her a chance to answer questions and explain what folks should expect from a good cocktail or good bartender.

“It’s not the people that already love and accept what we do, it’s the ones that we haven’t been able to reach yet,” she says. “…More educated drinkers means that they’re going to ask for more things, whether it’s more lenient liquor laws, more spirits available for our bars and consumers to be able to purchase through the ABC stores, or even going in and knowing that they like a higher rye content in their whiskey or a hoppier IPA.”

Britton’s point applies to plated food, too, which is seeing less and less profit as food costs increase. If you are hosting a charity event and are looking for involvement from chefs and mixologists, Reid suggests providing an ingredient stipend, as PCG does, and tickets for the participating restaurants to allow chefs to invite a spouse or loved one. Face time with customers is a great way for chefs to explain to diners why a plate costs what it does — but asking chefs to do that for free doesn’t help the problem.

“By expecting free food and labor, it perpetuates the idea that food is cheap or convenient,” Reid says. “Food is not cheap and convenient. And expecting people to come to the table with artisanal products with their labor at the table, it just creates this idea that there’s no value in food if we continue to let nonprofits abuse it the way that they are.” —Kristen Wile