Recent changes to the awards may be good for Charlotte 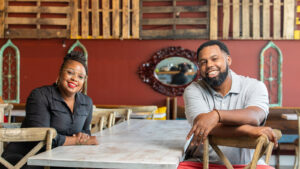 The James Beard Foundation announced its 2022 semifinalists in its restaurant and chef awards, and Charlotte has made the list. Greg Collier of Leah & Louise has been named a semifinalist in the Best Chef: Southeast Category.

Leah & Louise opened at Camp North End just as the pandemic hit, serving dishes inspired by the foods Greg and Subrina Collier grew up eating in Memphis in a restaurant that reflects a modern juke joint. The duo has since announced four new concepts at Camp North End, as well as a South End return for their breakfast spot The Yolk. Collier was recently named Chef of the Year at our inaugural UPPY Awards.

Charlotte has never had a chef advance past the first round of the James Beard Awards, where chefs across the country are honored by region and several national categories are announced. Chefs who make that first round are called semifinalists, and the narrowed down list in the next round are the finalists. Finalists will be announced in mid-March, while the winners will be announced at an awards ceremony in Chicago in June.

Most recently, Joe Kindred, Paul Verica, and Collier have made the semifinalist list.

There has not been a traditional awards announcement since before the pandemic, though New York Times reporting indicated the cancellation was in part due to a lack of diversity among the winners. In the time since, the foundation has announced changes to the awards process, including additions to the voting body and more standardized methods of determining who deserves nominations. Chefs must also now provide a personal statement as part of the awards process.

The new system could help Charlotte overcome some of the difficulty we’ve seen in winning a coveted award. The new voting body will hopefully bring more judges to the city; in comparison to places with a slew of former winners that can act as judges, Charlotte seems to have struggled getting enough voters in town for restaurants to advance. Read more about that here.

Asheville restaurant Chai Pani, part of the same restaurant group as Optimist Hall’s Botiwalla, was named a semifinalist in the Outstanding Restaurant category. Also in Asheville, Cúrate was named for Outstanding Hospitality, its chef/owner Katie Button for Best Chef: Southeast, Cleophus Hethington of Benne on Eagle as an emerging chef, and Susannah Gebhart of Old World Levain Bakery as pastry chef.

Raleigh chefs Oscar Diaz of The Cortez, Sunny Gerhart of St. Roch Fine Oysters, and Cheetie Kumar of Garland were also named in the Best Chef: Southeast category. In Winston-Salem, Stephanie Tyson of Sweet Potatoes and Peyton Smith of Mission Pizza are Best Chef semifinalists, as is Aaron Vandemark of Panciuto in Hillsborough. Greensboro also had a semifinalist: Machete, a restaurant that was honored in the Best New Restaurant category. See the full list of the 2022 James Beard Awards semifinalists.