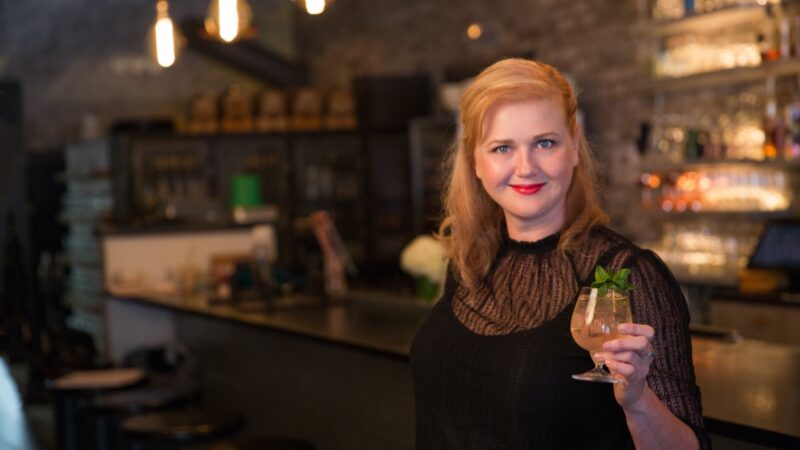 Colleen Hughes of Supperland earned the title of Mixologist of the Year. Photo courtesy

On Monday night, the North Carolina Restaurant and Lodging Association hosted its annual Chef Showdown, a cooking competition that results in the hospitality-focused nonprofit naming the state’s top chef, pastry chef, and mixologist. Charlotte brought home the title of Mixologist of the Year, thanks to the talent of Colleen Hughes of Supperland. Hughes was paired with Sutler’s Spirit Co. out of Winston-Salem, and served a gin cocktail made with acidified pine stock, blackberry gomme syrup, and sea salt air. Amanda Britton, now of Orto, is also a previous Mixologist of the Year winner, taking that title in 2017.

Also coming in with a top spot in this year’s contest is Savanna Brodar, pastry chef at the Kimpton Tryon Park Hotel, who won the People’s Choice Award in the pastry chef category.

Saif Rahman of Vidrio earned the NCRLA Chef of the Year award, while Tiesha Whittaker of Buttermilk Boutique won Pastry Chef of the Year. The runners up in each category, however, were Charlotte chefs: Chayil Johnson of Community Matters Café took the savory spot, while Gerald Hawkins Jr., now of Leah & Louise, came in second in the pastry category. As a result, both will be culinary ambassadors for Got To Be NC in the coming year, and “assist in the department’s marketing efforts thru cooking demonstrations, educational discussions on healthy eating, seasonal recipe development and the general promotion of North Carolina’s food and agriculture industries,” according to the campaign’s website.

Chefs at Monday night’s event were invited to cook at the Durham event based on a series of qualifying tastings, judged by various hospitality professionals in regional contests. The top two chefs in each category based on those tastings were announced at the event and named “Chef of the Year” and “Pastry Chef of the Year.” At the Chef Showdown event, competing chefs are asked to cook a sample dish for attendees to try, and attendees vote on their favorite dish. The titles of “Fan Favorite” are given to those who receive the most votes on the dishes they serve at the event. Competing mixologists are paired with a distillery and serve drinks at the event.

Charlotte took home pastry chef of the year in the previous two competitions, with Jamie Turner of The Asbury and Miranda Brown of Community Matters Café earning the honors, and Jossie Lukacik of Sweet Spot Studio was the debut Pastry Chef of the Year while pastry chef at Heirloom in 2016. Matthew Krenz earned Chef of the Year in 2017 as executive chef at The Asbury,

In order to be a part of the contest, chefs must apply to compete. Not all chefs choose to compete in the competition, especially this year, as the Covid-19 pandemic has left restaurants significantly short-staffed.