The weatherman shares when patio season starts, the coolest time of day to dine, and his favorite patios 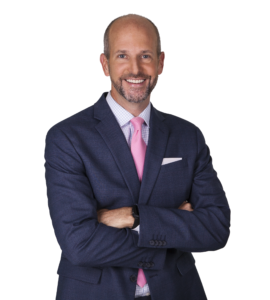 The Covid-19 pandemic has spurred restaurants to invest in outdoor dining, from permanent coverings to patio heaters and fans. With the Carolinas’ best dining weather creeping up on the calendar, we spoke with WCNC Chief Meteorologist Brad Panovich for Charlotte’s patio season forecast. Here’s what WXBrad had to share about when patio season starts, the best ways to beat the heat, and where you can find him dining outside around town.

Unpretentious Palate: We’ve had a couple of days of warm, beautiful weather. Is that here to stay or is that just a tease?
Brad Panovich: It’s kind of a tease. This winter, now that we’re out of it and officially in meteorological spring, was definitely much cooler than the last five. It’s been kind of a slower start this year than in years past. By this time last year, we were full on into pollen season. People were mowing the grass. It was definitely much more accelerated. This year, we’re having more of what I would call a typical winter and spring.

The thing about March in Charlotte, it is probably the most wild month weather-wise, because you can get 70, 80 degrees one day, but you could still get snow and cold sometime within the same week. So we’re not quite there yet, but we’re starting to see more of those warm temperatures..

UP: When would you say is the start of the typical patio season in Charlotte?
BP: After St. Patrick’s Day is where it starts, but to me, it’s definitely April. April to me is one of the best months weather-wise in Charlotte. And ironically, what people don’t realize, it’s also statistically our driest month of the year. Typically, we think of the saying “April showers bring May flowers.” But in Charlotte, April is our driest month of the year. It’s that perfect combination where it’s warming up, but it’s not super humid and hot yet — and it’s also the least rainy of any of our months. If there’s an analogy to the fall, it’s like October to me. October and April, those two months are the perfect combination of like San Diego weather here in Charlotte.

UP: Are you noticing any longer term trends in patio season’s starting and ending dates Charlotte?
BP: It’s certainly starting earlier. The winters are milder, the springs are starting a little bit sooner, and that’s been a trend we’ve seen for at least the last 15 to 20 years. That’s why I say it’s trending more into March. If you were to ask me this five, six years ago, I probably would have said April first. I really think now it’s becoming more like mid-March, that St. Patrick’s Day time frame. I now start to think when March Madness, the NCAA tournament, starts, it’s the same time that patio season kicks off it seems like around here.

UP: What do you attribute that trend to?
BP: A lot of it is climate change. It’s just a longer term trend of things warming up. And especially here in the Carolinas, we’ve seen that kind of come to fruition more in the the cooler time of year. Our summers are always hot. They’re really not trending any hotter than they have. But in the winter and spring, we’ve seen those seasons warm tremendously here due to climate change. And it certainly seems a trend that it doesn’t seem to be reversing anytime soon.

UP: What is the deal with humidity? Is that something that kicks in a certain time of year? When should we expect it?
BP: Humidity, typically, we can get touches of it here and there. But when it really cranks up is when we consistently get a flow off of the Atlantic or from the Gulf of Mexico. That typically happens in the summer when we stop getting cold fronts. It can start as early as late May, but usually it’s Memorial Day and after when we start getting locked into more of the sticky weather.

UP: Is there a best time to dine out in the summer that’s going to be less humid?
BP: The stickiest time of the day, believe it or not, is right around sunrise, because that’s when the temperature and the dew point are closest. The ideal time to be outside is actually in the evenings when people would be on a patio, because it’s still warm enough and breezy enough that it’s not super muggy yet. The late afternoon/evenings are where you kind of get to that sweet spot where it’s not super muggy yet. The mornings are usually the worst. We don’t think of it because it’s a little bit cooler, but it’s actually much more sticky in the morning than it is in the afternoon.

UP: As it starts getting really warm, is there anything we can do on patios to try and control the weather that makes a difference?
BP: Fans make a big difference, just circulating the air. Just circulating the air, we should feel cooler. But here’s a little hidden trick to having fans: mosquitoes. We think about mosquitoes when eating outside. Well, mosquitoes are really weak fliers. So if you can create about a five-mile-per-hour wind, it actually deters them. A natural, easy thing to do is to have a fan on your porch, a ceiling fan, even an oscillating fan. Not only does it cool you, but it helps keeps the mosquitoes away.

Pop up showers are what I always worry about. If you can, just get it covered up. The good thing is we’re getting out of that season where heaters are an issue. But even in the spring, in late evening when the sun goes down, there’s still a little bit of a chill in there. So the heaters can make a difference. But if you have coverage, you can trap some of that warmth from the daytime hours.

UP: What else do people need to know leading in to patio season?
BP: The only thing I worry about this spring, and this is the one most restaurant owners need to think about, is pollen. I had someone say, you know, we’re not going to get rain for seven days this week, which is like the longest stretch in a long time. And I said, that’s great. But the bad news is the pollen. … It’s not about having allergies, it’s about sitting in that yellow pine dust, you’ve got to constantly clean off your patio because that that pine pollen just starts getting everything. We don’t get rain for a while, there’s nothing to wash it out of the air. So you might end up doing more frequent cleaning to get the pollen because people don’t want to sit in that pine pollen outside. That’s the only negative thing about this time of year. Everything gets covered in that.

UP: Where are your favorite patios in town?
BP: There are so many good ones. You know, one of my new favorite ones — it’s actually not that new, but I haven’t been in a while because the Knights games haven’t been going on — is Graham Street Pub. That is such a cool little place in the corner. And it used to be all by itself, now all the development is going on around there. But that’s a cool spot because the views of the city are just amazing. I mean, I love that little spot there.

And then, gosh, there’s just so many great places up and down South Boulevard. But me and my family, we’re starting now more to get into the brewery scene a little bit as well, and we love going to the beer garden at Olde Meck. You can do anything out there, which I always enjoy that kind of setup as well, where you got a lot of different things to do, especially when you have kids and dogs. You just don’t want to just sit around, you want other things to do. When you have a multitude of things to do outside, we love it. And I love sitting outside in general.