A Day in the Life: Katy Kindred 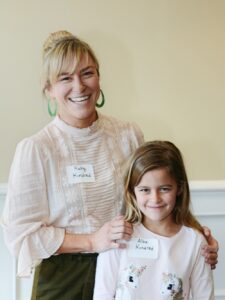 Katy Kindred with her oldest child, Alba, at an Unpretentious Palate event. Photo by Poprock Photography

2021 has been a year of new ventures for Katy Kindred, half of the husband-and-wife team behind Kindred in Davidson and Hello, Sailor on Lake Norman. In March, she launched Kindred Studio, a consulting and design firm for businesses and residences. And throughout the year, she’s worked with her team to launch milkbread, a café that will have one location around the corner from the family’s namesake restaurant and another in the former Dairy Queen in the heart of Plaza Midwood.

The growth means Kindred isn’t around the restaurants as often. She relays some advice a mentor gave her and her husband, Joe: “If you want to grow your business, you’re working on your business instead of in your business.” The café in particular has challenged Kindred to reimagine hospitality, as she strives to channel the front-of-house prowess she’s known for into a counter-service concept. Rather than kick back on her restaurants’ many laurels, Kindred, an avid runner, chases success in several forms. “It’s been interesting,” she says, “for us to challenge ourselves.”

Here’s what a day in her life looks like.

5:30 a.m. “I have a pretty dialed-in morning routine,” Kindred says. She rises early and takes a half-hour to read and reflect. “I’m a bit of an introvert, so that’s time for me to have some alone time.”

6 a.m. The school routine begins. She fixes breakfast, checks homework and backpacks, and makes her three kids bento boxes for lunch. She fills the containers with healthy options: apples, sliced chicken, fish, granola, yogurt. “There’s something therapeutic about putting those boxes together,” she says. “I really enjoy it.” She prepares for the day at a leisurely pace, sipping coffee and catching up on news.

6:45 a.m. The kids get going at a similarly relaxed pace. Kindred wakes them and lets them slowly come to life. She helps them brush teeth, dress, and pack their backpacks. “By 7:30, we’re out the door,” she says. This is the first year all three kids—Alba, 10; Luca, 8; and Gray, 5—have attended the same school, which simplifies the morning routine.

8 a.m. Home again, Kindred gears up for a run with Olive, a 1-year-old puppy the family welcomed during the pandemic. Olive is Kindred’s third Weimaraner, a breed she admires for its athleticism. Her daily runs range from 4 to 10 miles, and Olive matches her stride.

10:30 a.m. Kindred allocates the weekdays to various tasks. “Depending on the day,” she says, “I usually jump in the shower and go over to Hello, Sailor. We have a big office there that’s like, for lack of a better word, a corporate office,” where she works with Joe and their executive team. Other days, she takes advantage of the morning, when all the kids are at school, to visit the Davidson milkbread site or a client. Her schedule affords limited bandwidth for consulting, so she typically works with just two clients at a time. Lately, she’s been working with a wine bar in NoDa. Consulting has opened creative possibilities to the Kindreds’ business, and stepping back from day-to-day restaurant operations has freed them to think bigger. “It’s fun for us,” she says, “because it’s kind of like the sky’s the limit.”

For milkbread, the much-publicized supply chain issues have inverted the traditional build-out process. “When you build a restaurant, typically you can be working on your equipment while they’re doing things like foundational work and demo and things like that,” Kindred explains. Now, the order is rearranged. “Before we even break ground, they’re telling us we need to order equipment, so it’s a little bit backwards, but the issues that we ran into with the Davidson spot were things that were coming in from overseas. We’ve got some tile that’s stuck on a boat in Los Angeles.” Luckily, the Davidson project started when these issues were just emerging, so the Kindreds were able to get out in front of potential pitfalls. “The one in Plaza,” she says, “is going to be a whole other ballgame.”

2:30 p.m. None of Hello, Sailor’s famous fried seafood for lunch. Instead, Kindred, who sticks to a healthy diet, usually makes a salad to share with Joe: “We’ll eat that together here at the house and talk to each other and go over any kind of issues that we’re dealing with.” Some days, the Kindreds’ nanny picks the kids up from school, but Kindred frequently picks them up and ferries them to afternoon activities: rock climbing at Inner Peaks for Alba, piano for Luca, and drums for Gray.

7 p.m. Dinner depends on the day. Kindred often cooks for the kids, then makes a separate meal to share with Joe when he gets home. Other times, they all eat together. When both parents get home late, the nanny cooks. They lean toward simple, wholesome fare: fish they order through the restaurant, chicken on the grill. Kindred thinks ahead, tossing an extra chicken breast or two in the mix for the kids’ bento boxes the next day.

On Tuesdays, Kindred has a standing date night with her husband. The pair doesn’t get down to Charlotte as often as they’d like; their weekly dates are usually in the Davidson area, at Epic Chophouse, 131 Main, or Barrel and Fork. On Thursdays, the couple treats one kid per week to a dinner out. Alba, a blossoming foodie, has been into sushi, so future outings may include a trip to O-Ku in Charlotte.

9:30 p.m. Kindred tucks the kids in around 8 and follows them to bed soon after. She bookends her day with another few minutes of reading. Her bedside stack includes Gillian Flynn’s Dark Places, Tarana Burke’s Unbound, and a book Burke wrote with Brené Brown, You Are Your Best Thing. “I tend to read a lot of fiction in the spring and summer, and then I sort of drift into nonfiction in the fall and winter because the winter is kind of a bummer for me.” she says. “I’m a total summer person. I get a little bit more melodramatic and introverted in winter.”

Like their business, the couple’s home is growing. Early next year, after 12 years in a 1,300-square-foot home with three kids and a dog, the couple and their kids will relocate to a custom home Kindred designed — but they’re not moving far from their Davidson home. The new house is on the lot next door.