A neighborhood spot meant for conversation, cocktails, and shared plates

Support business owners of color by dining at these establishments 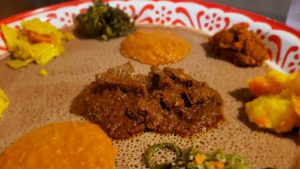 A platter at Abugida, with meat and vegetables atop injera bread. Kristen Wile/UP

Protests taking place across the nation are inspiring many to support their neighbors of color, whether it’s marching alongside them, standing up against mistreatment, or spending their money at Black-owned businesses. There are many fantastic Black chefs, food truck owners, and restaurateurs around town; in order to narrow this list down to ten, we had to cut out more-than-worthy contenders such as Soul Central and Mert’s. These are some of our favorites; find a longer list of places currently doing takeout and curb-side at QC Metro. Have a favorite we didn’t include? Let readers know in the comments! —Kristen Wile

Abugida Ethiopian Cafe
This small house-turned-restaurant on Central Avenue with bright string lights out front serves traditional Ethiopian cuisine. While you can order platters with meat, it’s the vegetables that are the best order here. They fill you up without leaving you feeling bloated, and the injera — a flat, somewhat sour pancake-esque bread — served with your meal is a delicious container for each bite.

Bardo
Co-owned by Jayson Whiteside and Mike Noll, Bardo serves some of the city’s most innovative cuisine. The quality of the front of house team, however, should not be overlooked. Managed by Whiteside, the servers are practiced in pacing your meal flawlessly and know the menu and its preparation through and through — an important feat when the dishes are so complex.

Burney’s Sweets and More
Charlotte’s location of Burney’s is owned by the same couple behind the local franchises of Pelican’s SnoBalls. The small bakery serves plenty of sweets and baked goods. Their specialty, however, is glazed croissants filled with anything from fruit jams to cream cheese or chocolate.

Finga Lickin’ Caribbean Eatery
It’s difficult to choose between Finga Lickin’ and Anntony’s, another favorite Caribbean spot. Finga Lickin’ wins out for its small menu that stays true to the cuisine, with dishes such as oxtail, chicken, and curry goat. Items run out late in the evening, so try to get there on the early side.

Freshwaters
Sharon and Cliff Freshwater opened the first Freshwaters in 1986 in New Jersey, and when they moved to Charlotte, they brought their restaurant with them. The menu is a blend of Southern and Cajun, including étouffée, jambalaya, and pork chops. The best meals here end with a visit to your table from Mrs. Freshwater herself.

Leah & Louise
Charlotte’s most visible Black chef, Greg Collier, opened Leah & Louise just before the pandemic hit. He and his wife Subrina also own The Yolk in 7th Street Public Market, a fantastic breakfast spot. Leah & Louise celebrates Afro-Southern cuisine in a way that hasn’t been done before, using local ingredients and bold flavors in a juke-joint inspired space at Camp North End.

LuLu’s Maryland Style Chicken & Seafood
If there’s one thing I’ve learned from my Maryland native friends, it’s to trust their taste in crab cakes. Michael Graff, my former editor at Charlotte magazine now at Charlotte Agenda, says that LuLu’s serves the best crab cakes in Charlotte. Graff is a Marylander and son of a fisherman. We’re not going to argue with him.

Mama Gee’s
A Ghanian restaurant serving takeout only, Mama Gee’s has been operating from a small space in First Ward since 2013. Find traditional dishes such as jollof, waakye, and plantains. Don’t forget dessert: bofrot, the Ghanian version of a doughnut.