Why restaurant health scores are dropping 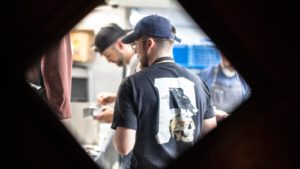 Restaurant kitchens are struggling to adapt to changes in cold holding temperatures. Photo by Jonathan Cooper

On January 1, 2019, the health department made a shift in its policy: restaurants and food trucks must store food at 41 degrees, instead of the previous temperature of 45 degrees. Though businesses were given two years of notice to prepare for the change, health scores have been taking a hit as restaurants struggled to adjust their refrigerators in the summer heat that lingered into the fall.

During the month of July 2018, there were 189 cold holding temperature health code violations, one of the missteps that causes a restaurant’s rating to be less than 100 points. This year in July, there were 295 violations relating to cold holding temperatures — a 56 percent increase over one year. Popular restaurant Futo Buta, for example, got hit with a three-point deduction in mid-August for not maintaining the 41-degree temperature, though their food was stored below a previously acceptable 45 degrees, and ended up with a B rating. Upon re-inspection in September, the restaurant only lost a point and a half, with the inspector noting improvements.

“Significant strides in cold holding have been made,” the inspection report reads. “All other coolers are holding product at 41F and below. And only 6 containers of product required discard due to temperature today.”

According to county officials, the regulation of storing food at 41 degrees was put in place to help curb food-borne illness, particularly from listeria.

“Most food-borne pathogens do not grow well when kept at 41 degrees F or below,” says Rebecca Carter, public information officer for Mecklenburg County. “Unfortunately, Listeria monocytogenes can still grow slowly at refrigeration temperatures at 41 degrees, but there is a significant reduction in growth when foods are stored at 41 degrees versus 45.”

For kitchens, however, ensuring their ingredients remain at 41 degrees has been a challenge — especially in the hot summer months.

“It’s stressful because most of our coolers — and I think lots of kitchens are in this position — most of our coolers, especially the ones where they have the open top, they’re not designed to insulate that food up top from 100-degree air,” 300 East co-owner and chef Ashley Boyd says. “You can’t do it.”

To help keep ingredients at the proper temperature at 300 East, Boyd and her team had to make significant adjustments to the way they store food. On hot nights in the summer, the kitchen temperature can creep up to 105 degrees. They’ve replaced plastic containers with metal pans, which conduct cool air better, and keep ice packs and pans of ice in the freezers. Instead of turning up the air conditioning when the restaurant is closed, the staff leaves it running so the coolers don’t have to work as hard.

Shai Fargian, executive chef at Yafo Kitchen, says they had to invest in new equipment to meet the health department’s standards, including a blast chiller that cost approximately $20,000 in the SouthPark store. In the newer locations, they’ve been building kitchens with bigger coolers. Fargian has also had to change the process for preparing Yafo’s beloved hummus, because it’s too dense to cool down to 41 degrees in a refrigerator in the amount of time required by the health department. Now, the staff has to store it without a lid in the freezer — and hope they move it to the walk-in before it freezes, or the whole batch gets thrown out.

In the summer months, the new requirements can be especially hard on food trucks, who must follow the same procedures as restaurants. Tara Ebersold, who owns food truck and catering company Bleu Barn Bistro, says a food truck can be up to 130 degrees inside when the weather is hot, calling it a metal box sitting in the sun.

To keep their coolers holding products at the 41 degree mark, they store things in quart containers or gallon zip-top bags, and bring ice onto the truck every shift. On days where it’s simply too hot to meet the requirement, the food truck shifts to the health department’s time limit on temperatures over 41 degrees, where food has to be tossed after 3 hours. Like Boyd and Fargian, Ebersold and her team had worked toward the changes long in advance, but haven’t found adapting easy.

Even with the newest, best refrigerators, we struggle to keep it at 41 degrees — even our huge walk-in, we’re struggling at keeping it at 41 degrees,” Ebersold says. “I get why they’re doing it, for health reasons, but I can see some of these smaller kitchens or people who don’t know the proper practices to work around it or are still learning it, they’re definitely going to get hit for it.”

While the change is in the interest of public health, there has been one place in particular that doesn’t quite make sense: even produce straight from the farm has to be brought down to 41 degrees. So when a fresh batch of tomatoes comes in during the peak of tomato season, chefs have to chill those tomatoes before they can be served. And if you’ve ever refrigerated a tomato, you know the result: a texture of mush. Ebersold says they have to order less basil more often because it wilts and browns quickly thanks to the low temperature it’s stored at.

Restaurants are inspected every three months, and for the first inspection, restaurants were given a grace period for the cold holding temperature changes. On the second inspection, if things were still not being cooled properly, the restaurant lost points. A third violation results in double the points being deducted from a restaurant’s health rating. Fargian says he believes we’re already seeing the scores drop — and will continue to as restaurants hit their third inspections.

“They gave us a two-year notice, but it’s really hard to make all those changes to accommodate it,” he says. “We do it because we’re a bigger company and there’s a lot of infrastructure. I think about the mom-and-pop restaurant or a chef/owner … it’s really, really hard to do it. And some things are just better off at room temperature.” —Kristen Wile