Where Chefs Eat: Paul Verica of The Stanley 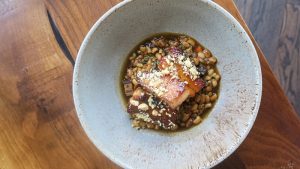 Verica says he orders any dish with pork belly from Haymaker in Uptown. Kristen Wile/UP

Folks in the restaurant industry know good food, so we want to know where they eat when they’re outside of their restaurants. In this series, we ask a member of the culinary industry to share their favorite local restaurants (not including their own) and what they order. Paul Verica, a James Beard Award semi-finalist and owner of The Stanley and upcoming NoDa restaurant Orto, enjoys dining out at chef-driven restaurants with his fiancée, Jane. —Kristen Wile

Bardo, South End
One of the city’s most innovative, chef-driven menus
Verica’s order: Eggs and grains

The Goodyear House, NoDa
A casual neighborhood spot with Chris Coleman at the helm
Verica’s order: Barbecue chicken with butter beans and chow chow
Pro tip: “Their patio is killer – especially during these times,” Verica says. “When we go out to eat, we pretty much only eat at a patio.”