‘Tis the season for holiday beer 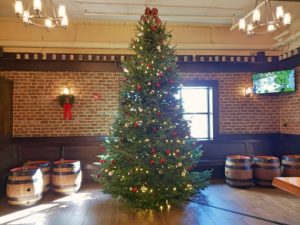 Olde Mecklenburg Brewery is one of the many breweries around town releasing holiday beers. Kristen Wile/UP

As we turn the corner from Thanksgiving and head full speed toward Christmas, our culinary senses tingle with anticipation of holiday flavors and smells: chocolate, orange, cinnamon, nutmeg, vanilla. These are foods and ingredients we enjoyed as children that still make us think of our favorite holiday foods as we grow older. Today, we allow our adult taste buds to focus on local craft breweries’ holiday releases that bring liquid smiles to our faces.

Although some of these beers are heavy hitters, there are plenty available with moderate alcohol levels so that you can enjoy more than one and still remember the words to your favorite Christmas carols.

Below are some of the holiday beers available in the Charlotte area. Unless otherwise stated, they are already available both in taprooms and in various stores.

White Blaze is a 6% ABV amber winter ale utilizing vanilla and cinnamon for a holiday treat.

Cheers!, a winter IPA in the style of Celebration Ale, utilizes old-school hops that provide grapefruit and pine aromas and flavors. Cheers! sports 6% ABV with an abundance of malt and hop flavors sure to make you smile.

Winter Spiced GMV is the winter seasonal version of the brewery’s Good Morning Vietnam. A blonde ale with coffee, cinnamon, nutmeg, ginger, and double vanilla from the use of Madagascar vanilla beans. This winter warmer has an ABV of 5%.

Lesson in Economics is a 7% ABV dirty chocolate chai stout conditioned (rested) on chai tea and cacao nibs. To kick things up a notch, the brewery is also releasing two barrel-aged versions of the beer:

Barrel-Aged A Lesson in Economics hoists a hefty 13% ABV and is a blend of imperial stouts aged in a 30-month old Weller bourbon barrel and a 23-month old Basil Hayden bourbon barrel then conditioned on vanilla, chai tea, and cacao nibs.

Barrel-Aged A Lesson in Economics with Coffee is a collaboration with Killer Coffee. Utilizing the same barrel-aged beer, this one is then conditioned on vanilla, chai tea, cacao nibs, and Ghost Bear coffees from Mostra. ABV 13.5%.

All three beers are available in the taproom only starting December 10.

A Blonde Christmas is a sessionable 5.4% ABV blonde ale with cinnamon and vanilla.

Named after one of the true American culinary greats, Julia Session Sour is a 5.2% ABV sour made with plums, a hint of rosemary, then rested on orange zest — a great option for holiday meal pairings.

Sherpa Winter Porter (4.5% ABV) is an English porter brewed with cinnamon, cocoa nibs, and lactose. For those looking for a creamier mouthfeel, it’s also available on NITRO.

Holiday IPA with a 5.5% ABV features Belgian yeast character and is generously hopped with citrus hops. The yeast and hops provide complementary fruity, orange zest, and grapefruit aromas in tandem with spicy notes. $2 per 4 pack will be donated to Feast For Good, which organizes and activates food/meal resources to nourish cancer patients.

Hoppy Holidays is a 6.5% ABV medium-bodied IPA. Loaded with six hop varieties complemented by citrus notes and a brisk piney aroma, it’s a fantastic beer for the most wonderful time of the year.

‘Tis the season to be merry and enjoy some holiday cheer. Support your local breweries by trying some of these “winter warmers” and sharing them with friends.