We’re loving the continuation of churches as restaurants 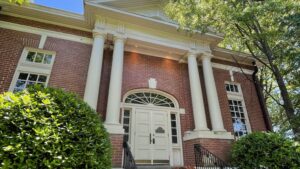 The new owners of the Dilworth church that formerly housed Bonterra have announced their plans for the space. The upcoming restaurant will be called Leluia Hall, shortened from Hallelujah.

Similar to sister concept Supperland, the restaurant’s menu will encourage family-style dining, and highlights will be steaks and a raw bar. According to Jeff Tonidandel — who runs the restaurant as well as Haberdish, Ever Andalo, and Growler’s with his wife Jamie Brown — the dessert program will also bring in coastal influences.

Attentive service and attention to all aspects of dining, including cocktails by Colleen Hughes, wine lists by sommelier Michael Klinger, and unique decor have become staples of Tonidandel and Brown’s restaurants. With their purchase of Bonterra, the restaurateurs continue helping to shape the culinary reputation of the city.

One of Charlotte’s many nicknames is City of Churches, and bringing another high-quality, thoughtful concept to a historic church continues to create a signature aspect of Charlotte’s culinary scene. It’s especially noteworthy given the more frequent tendency here to tear buildings down.

“It’s an honor to have the chance to keep an old building like this for Charlotte,” Tonidandel said in a press release announcing the concept. “This city is growing so quickly, and we know old buildings help maintain a sense of character. As all these new projects are underway even on this very block, we will get to be a part in holding on to history and hopefully add more value to the coming businesses, the local neighborhoods of Dilworth and South End, and to the city overall as a destination.”