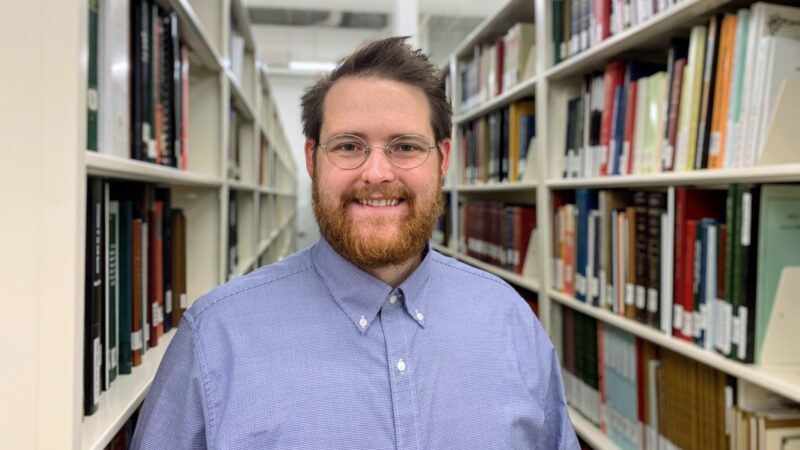 John O’Connor, manager of the Robinson-Spangler Carolina Room, is seeking out cookbooks to build up the Charlotte Library archives. Photo courtesy

The city’s most comprehensive collection of Charlotte history is kept in Uptown at the Robinson-Spangler Carolina Room, a part of Charlotte Mecklenburg Library dedicated to maintaining a collection of news, periodicals, film, and documents. Though no longer one room, and currently only open for virtual support with appointments returning in person this fall, the Carolina Room is a destination for research into the region’s history.

When John O’Connor took over as manager for the Carolina Room and its archives in the fall of 2020, he noticed a gap in the collection. As someone who has always used food as a connection to people and cultures, he felt there was a lot one could learn from cookbooks over generations. Yet for decades, there has been an unwritten rule that the library didn’t take cookbooks for its archives.

“Probably what happened was, people would offer up every cookbook that they had,” O’Connor says. “People would be like, ‘Oh, I have all these cookbooks. Do you want them?’ Do we want, I don’t know, The Joy of Cooking or Mastering the Art of French Cooking? We don’t need any of those general cookery type cookbooks, and I think that eventually got extended to, we just don’t take cookbooks, period.”

Now, O’Connor is looking to fill in that gap. Cookbooks were once a popular fundraising tool for local churches and nonprofit groups, and the recipes they’re filled with are a spotlight on what people were eating in their specific region at the time they were published. To O’Connor, that spotlight is an important one.

“Cookbooks that have general recipes but are published by local organizations certainly should be within the scope of this collection,” he says. “So thinking about things like church cookbooks, that’s a cookbook that probably has general recipes. It might have green bean casserole. There’s nothing very specific about green bean casserole to Charlotte, North Carolina. But enough of those over a long enough time starts to show a pattern about how people were eating and what ingredients were being used and what types of dishes were being created. Some churches will put out a cookbook every few years, every five years or so. And if you collect enough of those, then they’re a really valuable tool to be able to trace. What were the foodways of these people over time?”

To start, O’Connor has been ordering cookbooks still in print that the collection is missing. However, he’s certain many of the cookbooks he’s dreaming to have added to the library are in Charlotteans’ bookshelves, gathering dust. Those who have Charlotte and Mecklenburg County specific cookbooks and wish to donate them to the library can send O’Connor an email with the book title to see if it’s a fit for the collection. While those seeking information can make an appointment with the Carolina Room team, The Charlotte Library’s Main Branch in Uptown will reopen in its new location in 2025 — with, thanks to O’Connor, a much larger cookbook collection.

“These cookbooks are really valuable and they do tell a culturally significant story, but they’re also still cookbooks and they provide really good information about what techniques different people are doing and using and can provide some of that inspiration,” O’Connor says, “either historically, going back to your roots, if that’s something you’re looking to do, or pushing forward. What are some of the new and interesting things people are doing? That is the hope — that it will be there as a resource for that.”