Subscribe and help us donate money to Ben’s Friends


It’s something that induces a sigh most times we hear it. “Can you help me promote…” or “can you get the word out?” As a news outlet, our job isn’t to help restaurants promote themselves, even though we’re asked to daily. Our mission is to tell you what you need to know, and sort through the oversupply of information so you don’t have to. 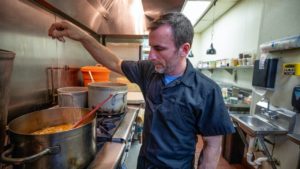 Sam Diminich is co-leader of the Charlotte chapter of Ben’s Friends, an addiction support group. Photo by Peter Taylor

But when Sam Diminich, the chef and owner of Your Farms, Your Table, reached out to see if we would share the news about a fundraiser he’s hosting on Saturday, we couldn’t say no.

Diminich recently signed the lease on his first commercial kitchen space at The City Kitch in West Charlotte, where he’ll be able to expand production for his three-course meal delivery service. We’ve written about Your Farms, Your Table in the past, but the reason we wanted to share his fundraiser stems from another story.

In May, we wrote about fears among sobriety advocates — including Diminich — that the pandemic and upheaval it brought to the restaurant industry would cause relapse among recovering addicts. According to Diminich, that fear is becoming reality, so on Saturday with the help of guest chef Desiree Mines Kinker, he is donating 100 percent of sales to Ben’s Friends, a support organization for restaurant industry employees battling addiction.

According to Diminich, the organization is funded by the food and beverage industry. With everything going on, that funding has slowed.

“Obviously, the industry is in crisis mode right now and that has crippled our ability to generate funding,” he says. “That issue, coupled with a 30 percent increase in relapse rate, has compelled me to step up and do what I can.”

We’d like to do what we can, as well, by sharing this news with you. If you’d like to support Ben’s Friends by ordering a fantastic, locally sourced three-course meal, you can do so by Friday morning on the Your Farms, Your Table website. You can also donate directly to Ben’s Friends here.

That’s not all we’re able do, though, so even though it’s a difficult financial time, we’re going to give what we can to help our friends in the restaurant industry. We’re going to donate $10 from every new annual subscription between now and next Thursday to Ben’s Friends. If you’re not yet a paying Unpretentious Palate subscriber, we hope you’ll consider supporting us and Ben’s Friends by subscribing here.

Thank you for your continued support of the food industry.
Kristen