After more than a decade in business, the gastropub will close and become an Italian restaurant 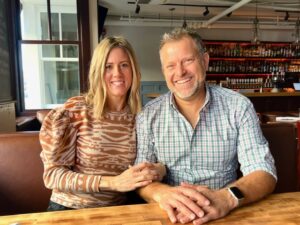 Beloved NoDa crêperie Crêpe Cellar, owned by husband-wife team Jamie Brown and Jeff Tonidandel, may be fading into the background, but its influence still lights the way for this couple’s ventures. The 11-table, cozy neighborhood spot served as an intensive training ground for the two Davidson grads, each armed with an MBA and a dream. It was through Crêpe Cellar that Tonidandel and Brown initially learned how to operate and thrive as married partners and business ones, too. Now, they’re ready to take things in a largely different direction at the tiny establishment they started in 2009.

When they initially set out in restaurant development, a crêpe shop was one of the most doable and financially feasible ideas.

“We ate steak and frites in London, pasta in Italian cafes, crêpes on the streets of Paris, and meats and cheeses in tiny Spanish bars,” they recall. Now that they’ve acquired a wealth of experience, prosperity, and human resources, Tonidandel and Brown are rekindling those travel memories but embarking further down an alternate culinary path.

Though Crêpe Cellar is closing in name, many of the Italian-style dishes they’ve been serving will continue to be a part of the menu at the new concept, Ever Andalo (pronounced “on-duh-low”). 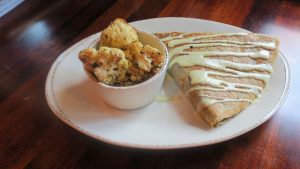 “You cannot remove crêpes from a place called Crêpe Cellar,” Brown adds, “so we decided to explore an Italian direction instead. This has been an incredibly fun journey for us delving into the food and drinks, and it has added levity and fun to a situation that could just feel like a downer.”

Tonidandel wants to be clear that the change is a positive one. “We’re doing this to progress and get better,” he says. “There’s nothing inherently wrong with Crêpe Cellar, or that it can’t go on. We could keep on doing what we’re doing, but we want to continue to evolve.”

While the couple is finding excitement in the transformation, there is bittersweetness, too.

“There will be a night when we will eat our last meal here together,” Brown says. “Yes, I will cry. Yes, it is sad. And I hope our regulars understand that as business owners, this isn’t something we’ve done on a whim. We have 25 people who work here, and it is our job to set this place up for the long haul. That requires difficult decisions when the numbers aren’t making sense anymore.”

The couple started the conversation about a Crêpe Cellar revamp in 2019, but it wasn’t the right time since the restaurant was doing so well. Then came 2020.

“Crêpe Cellar got hit really hard,” Brown says.  “Small, closed-in restaurants were hit terribly. As restaurants reopened during Covid, Crêpe Cellar did not recover like our other places, and we knew we needed to do something to give it the stamina to make the long haul.”

Disruption has never deterred the two from forging onward. After all, they opened Crêpe Cellar during a financial crisis and Supperland during a pandemic. They also just purchased the historic Dilworth church Bonterra used to call home, even though the economy has yet to stabilize and new Covid variants continue to emerge. Their minds have remained open to expansion, and the doors to their other venues have, too: Haberdish, Growlers Pourhouse, and Reigning Doughnuts.

Months of lockdown and reflection led to this desire to act on a full rebrand rather than minor changes, little by little. An incubation period also led the owners to cultivate a work environment more ingrained with possibility for their team, which now consists of 150 people.

“We are trying to build a better picture of what working in this industry is and what it can be, so that we have a culture of growth, of empowerment, of creating careers for people and not just hourly jobs,” Tonidandel says.

Personally, however, the closing the doors to the restaurant — even to reopen it as something new  — will be a bit more difficult. The Tonidandel-Brown family has made a tradition of eating dinner at Crêpe Cellar weekly.

“I love this place; I love the people,” Brown says. “When we first told our kids, our youngest — who is six — just cried. I’ll be honest, I’ve had my weepy moments too. This is a special place to us.”

Brown knows it may be easier to keep the status quo; however, she’s ready to embrace this transition.

“What we’re doing sometimes takes my breath away because I know how risky it is,” she says. “I know it’s a lot of effort to start over. But I try to take a deep breath and get back to the vision of creating a super vibey, fun, one-of-a-kind, highly-curated Italian restaurant.”

Ever dreamers, ever risk takers, Ever Andalo.

The new name for Crêpe Cellar is a spin on an old one: Antonio di Andalo, which eventually became Tonidandel. Tonidandel’s paternal lineage hails from the small village Andalo, of the Dolomite region, in northern Italy. Now that he (and his three kids) have attained Italian citizenship, the family is digging deeper into those roots with the intention of remaining true to them.

The last opportunity to reserve a table at Crêpe Cellar will be for Sunday brunch service on January 30. Then, the restaurant will close for two to three weeks to finish renovations before opening as Ever Andalo.

Brown and Tonidandel will close Crêpe Cellar’s doors at 3 p.m. on the last day, opening them back up for family to enjoy a dessert crêpe and Champagne. Together with colleagues, many of whom have been with them for five to 10 years, they will celebrate.

“We’ll toast the good times, and the faces that came in and out of our lives at Crêpe Cellar,” Brown says. “We’ll toast all we’ve been through over the past couple years. And all those favorite dishes that will soon fade into sweet memories. Finally, we’ll toast the fact that we’re all still here, and that we get to do it all over again.”

Here are some highlights of what to expect at Ever Andalo: