From Lineberger’s to Hello, Sailor, heaps of fried fish are part of our identity

You can hear the roar of the audience subside as the growl of  a man made up to look like Dracula doing an impression of Elvis croons into the mic: “Fish camp woman, oh baby I like the way you smell! Is it flounder, hushpuppies, or slaw, you smell like? I’m a damned if I can tell!” Hearing these words, I’m transported twenty years in the past, back to my favorite fish camp: Lineberger’s.

Listening to Unknown Hinson’s lyrics, I can feel the restaurant’s air pregnant with the heavy fragrance of fried batter. I can see the years of grease that have formed a thin patina on the cheap wood paneling on the walls and the trophy catches that adorn them. I can sense, in the cheap banquet hall chair next to me, my grandfather E.P., always quick to chat up anybody, enjoying banter with the down-home waitress, even if she is only playing a part. Once our food arrives, our table groans under the weight of hot piles of fried catfish and calabash shrimp. Giant pitchers of sweet tea refill, refill, and refill again the frosty plastic cups arrayed across the table top. So full we can hardly move, my family makes its way to the exit to pay the bill. With wide eyes, I shop the aisles of candy near the exit with my grandfather, who indulges my every whim. My fists gripping a large paper bag filled with sweets paid for by E.P., we all head out into the sticky summer night – in my memory these trips always take place in summer – and get back in our convoy of cars for the ride back to North Mecklenburg.

If Proust had a madeleine dunked into a cup of tea, I have a warm hushpuppy lathered in margarine spread. To those who didn’t grow up with the fish camp tradition, fish camp can sound like a place where you learn to bait hooks, cast lines, and what time of day is best to catch that giant marlin. In reality, fish camps sprung up along the banks of the Catawba river during the heyday of the textile mills as cheap places to feed the whole family. Fishermen would set up camp along the river, fish all day, and fry up their catches for anyone willing to pay to eat it. For the blue collar workers who spent grueling hours on the mill floor, fish camps became a sort of ritual treat, and a much-needed source of calories after all that hard work. 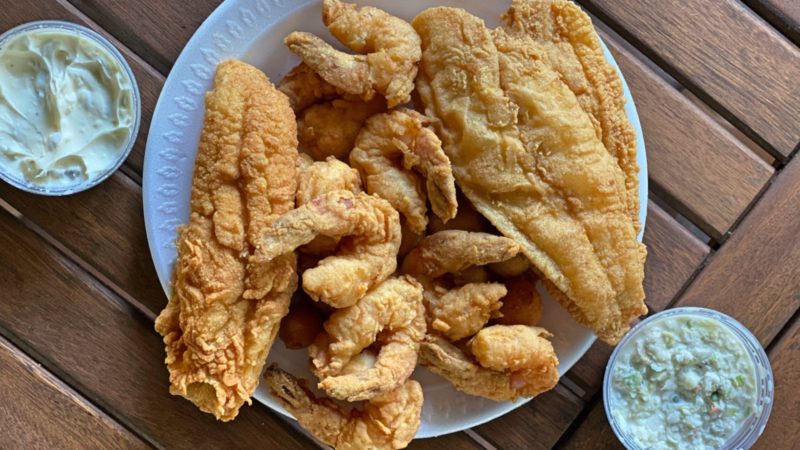 A plate of fried flounder and shrimp atop hush puppies from Captain Steve’s on Monroe Road. Kristen Wile/UP

Luther Lineberger, a former mill worker himself, saw the popularity of these fish camps and decided to create a more permanent establishment for the hungry customers of the region. In 1948, Lineberger opened up his eponymous restaurant on South New Hope Road in Gaston County, and it soon became the most popular place to eat in the area.

For my family, a fish camp supper could mean only one thing: a trip to Lineberger’s. We’d head to the Gaston County landmark for a raft of fried catfish, shrimp, and the ubiquitous basket of steaming hot hushpuppies. I would get so excited on the car ride there, knowing all that delicious fried goodness was waiting for me. Oftentimes my grandfather would ride in our car and tell stories from his past, or share the latest church news. Once we arrived, our cars would empty and my cousins, grandparents, uncles, and aunts would congregate near the front door before heading in.

The dining room became as familiar as my own home: wood-paneled walls covered in trophy catches, the overwhelming smell of frying batter, and the huge candy store that sat near the front door where E.P. would buy whatever my brother Justin and I wanted, much to the chagrin of my parents.

Lineberger’s set the standard for the fish camp menu. Catfish, perch, flounder, shrimp, oysters, and scallops, all deep-fried and served with a small mountain of hushpuppies, fries or onion rings, and slaw.  Sweet tea is served the way water is at most other restaurants and is sweet enough to make your heart race. If you didn’t leave Linberger’s feeling like you could never eat again, you hadn’t done it right. Portion sizes at fish camps are excessive; a half-portion is still likely a week’s worth of calories.

To give the illusion that your meal isn’t totally unhealthy, fish camps often have large salad bars with the purchase of any meal. Every conceivable topping, a dozen different dressings, and even Southern oddities like pickled watermelon rinds can be found at these salad bars. You might be getting some veggies in your diet, but the bacon bits, cheddar cheese, and bath of ranch dressing likely undo the health benefits. Not that any of that matters; a fish camp ain’t a health spa.

That might help explain the decline of the fish camp in the 21st century. In 1998, after 50 years of service, Lineberger’s closed its doors for good, leaving my family bereft. Sure, we found other fish camps to patronize, notably Catfish Cove, but none of them had the familiarity or homey comfort of Lineberger’s. The simple truth is that fish camps are incredibly unhealthy. In a nation with a serious obesity crisis, I get the feeling that many people have started to look elsewhere for healthier dining options.

I recently made a trip to one of my family’s other favorite fish camp haunts, Captain Steve’s on Monroe Road, and it was exactly as I remembered it. I was led to my booth, handed a menu, and called sweetie and sugar several times, as though neither I nor the restaurant had changed. At least on the menu, that’s true. I scanned the room as I sipped my sweet tea, seeing dozens of smiling faces deep in conversation with loved ones. I almost felt like I was back at Lineberger’s, minus my family. I ordered a combination platter of flounder and shrimp with onion rings and hushpuppies.

When the food came, I was happy to see the portion sizes hadn’t changed a bit. Tartar sauce, cocktail sauce, and ketchup, as well as honey butter for my hushpuppies, were soon sat on my table, and I was ready to dig in. My first bite was a fried shrimp slathered in tartar sauce and chased with a swig of tea. It was a burst of flavor that transported me back to my youth like Proust’s madeleine. As I ate, I could feel my waistline expanding and my body slowing down. All that grease acts like a sedative — then, all of a sudden, you become aware of the greasy aroma sticking to your skin and clothes, leaving you feeling like you need to shower.

I regretted none of it. I paid my bill with a smile, drove home, and waited out my food coma on the couch.

The fish camp tradition isn’t dead yet. Captain Steve’s, Twin Tops, Catfish Cove, and the Captain’s Cap are keeping the tradition alive. There’s Hello, Sailor, the elevated re-imagining of the fish camp from Joe and Katy Kindred, and several other chefs have fish camp concepts in the works. I don’t think the fish camp will ever truly die, nor do I want this tradition to go away. In a time and place that’s always changing, it’s nice to know that some places keep things the same for old times’ sake.