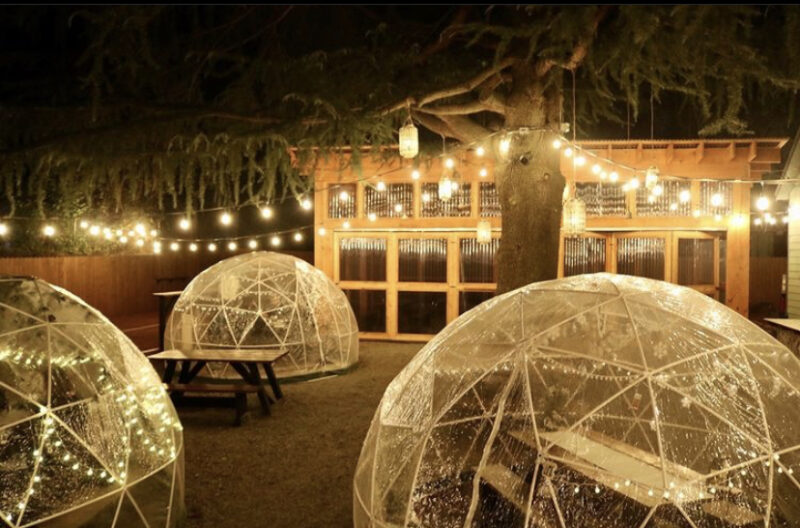 Proceeds from igloo reservation fees at The Goodyear House in NoDa are donated to a non-profit. Photo courtesy

The weather may be warming, but it’s still igloo season at The Goodyear House. These private dining huts sprouted on the restaurant’s lawn in December 2020 in response to COVID-19. The igloos became a way to enable intimate yet socially-distanced meals. Two years later, they are also extending alfresco dining during cooler months (able to warm the temp by approximately 25 degrees) for up to a party of six and helping The Goodyear House do good by addressing local and international needs.

“The igloos gave people a chance to be in their own space,” Chris Coleman, chef and partner at The Goodyear House says. “It was a win-win all around. They took off. Then we had folks not showing up for reservations. That was detrimental to the business, and we felt bad for those on the waitlist. We didn’t want to implement a minimum on them, though, because that’s not who we are.”

The solution was to charge a $25 rental cost, which incentivizes customers to honor the reservation. Rather than pocketing the fee — no show or not — the owners decided to route all igloo donations to Goodyear Giving, the restaurant’s charitable giving arm. This 501(c)(3) not only aids restaurant staff in need due to pandemic hard times but also works to address educational inequities, both domestic and abroad.

The Goodyear House staff donates their time and physical space to partner with Garringer High School, NoDa’s neighborhood CMS school. “My thinking with that,” Coleman says, “was if we’re going to be building a school for education in another country, we should be investing in education in our own country, too.” The Goodyear House staff collaborates with CMS’s culinary program and directly with Garringer’s teachers to develop an internship pathway. Coleman himself engages with the teens and teachers through pro-bono career talks and culinary demonstrations.

Goodyear Giving has broadened its reach by going global with international organization BuildOn, a non-profit that aims to lessen academic disparities by constructing schools in remote villages of under-resourced countries. A crew of sixteen — comprised of individuals from The Goodyear House, Yellow Duck Marketing, and a few other friends — will depart for the mountainous coffee region of Nicaragua during the last week of April to build a schoolhouse. 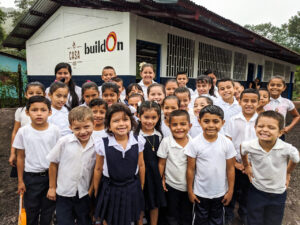 Since they began in 2020, the igloo fees along with other donations have generated the funds needed to cover the $30,000 construction costs, but need still remains to fulfill the entire team’s travel expenses so they can physically complete the build.

Charlotteans can help close that gap. On Sunday, March 27th, The Goodyear House will host a ticketed event (on sale via GYH social channels) with all proceeds going to the Nicaraguan BuildOn project. This afternoon fundraiser will feature live music, roasted pork, an oyster shucking station, and Revelry Brewing beer tastings.

Igloo reservations are available via OpenTable, but customers can also dine indoors and donate any amount. “Even if you don’t eat in an igloo, you can donate to Goodyear Giving,” Coleman says. The menu explains how, and servers can share details about the initiatives, too. “If you feel like giving to the cause, we can add that to your bill in any amount. If you want to give $5 bucks, great. If you want to give a hundred bucks, that’s great too,” he says.

Here are some more ways to dine, sip, and donate in Charlotte: 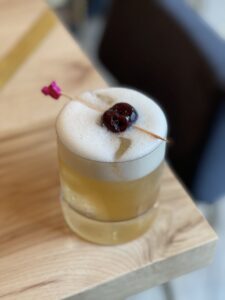 Legion Brewing’s “Adventure Tap”
$1 of every pint poured goes to a rotating charity. The SouthPark location is supporting 123 Jump, and Plaza Midwood is giving to YBLA (Young Black Leadership Alliance) this month. More than 108 organizations have benefited and more than $10,000 has been raised through this giving program since its inception in 2016.

NoDa Brewing Company’s Charitable Taps
NoDa Brewing consistently gives back through pint pours. Presently, there are 4 different charitable beers. $1 of each pint sold goes to a selected cause. The re-release of “Too Blessed to Be Stressed” Helles Lager will support Brooks’ Sandwich House to help raise both awareness and funds to offset the theft of a custom smoker stolen from the family business. “Brave Noise” Hazy Pale Ale is a national collaborative effort with each brewery giving donations to a different organization dedicated to cultivating safe spaces in the bar and craft beer industry. “Winter Walk in the Park” Belgian Winter Ale pour proceeds will go to the organization Friends of Queens Park, a non-profit working to make this dream of a park a reality for Charlotte. The latest charitable beer (tapped February 11th) is a third edition of “Black Is Beautiful,” a chocolate-covered strawberry Imperial Porter. The organization of choice for this pour is JazzArts Charlotte, which provides music education for students through the timeless tradition of jazz.

Common Market’s “Sammies for a cause”
The CM South End, Oakwold, and Rock Hill delis create two daily sandwich specials (a meat and vegan or vegetarian option). $1 of each daily special sale goes to a set of different charities each month. This month’s charities are Brave Step (South End location), Smart Start (Oakwold location), and the YMCA of Upper Palmetto (Rock Hill location). The CM staff learns about the mission and work beforehand so they can help educate customers, too.

Para’s “Lobster Shooters”
$1 of each order is donated to @Its4TheKids Foundation.

Fin & Fino’s “The Treatment” tasting menu experience
Let the culinary team take over and treat you and your dining companions to special on and off menu small plates. Each guest who orders it in turn raises $5 for one of the two charities Fin & Fino supports that month (currently Hopeway and the Leukemia and Lymphoma Society).

Counter- immersive dining encounters
At least 10% of annual gross revenue profits (and additional funds raised through certain events) goes back to local 501c3s. Last year, the restaurant gave around $3,000 to various philanthropies through the Charlotte Wine and Food festival, close to $10,000 to the Time Out Youth Center, and $3,500 to Museum of the Cherokee.

Did we miss one? Share in the comments to help spread the love even further!