By Erin Bradley, Director of Business Development for Freshlist 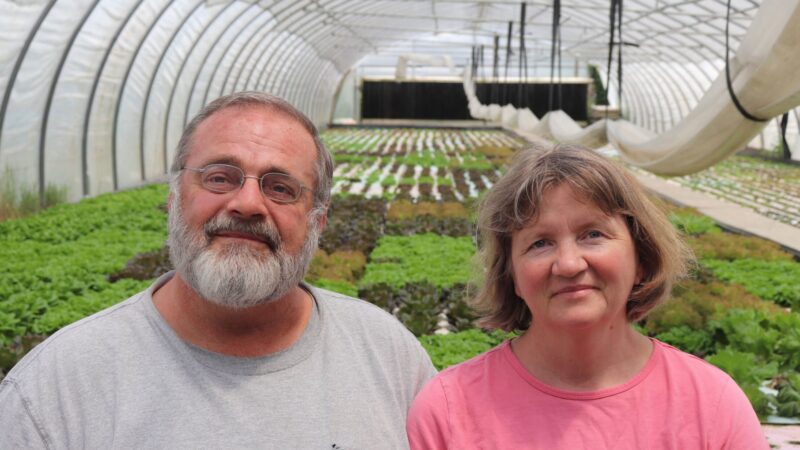 Editor’s Note: This story has been unlocked as a public service. Support local food journalism by becoming a UP Member today.

Charlotte’s local food and farming community lost one of its pioneers last week. Co-owner of Tega Hills Farm Mark Robinson passed away last Monday night after a brief illness. Founded in 1999 by Mark and his wife Mindy Robinson, Tega Hills has been a driving force in our city’s local food movement and serves as a model for successful, small-scale family farming in the 21st century.

In addition to being anchor vendors at the Matthews Community Farmers Market and Charlotte Regional Farmers Market, they were one of the first farms to deliver fresh produce directly to restaurants, thanks largely to Mark’s ingenuity and innovative spirit.

During his memorial service this past Sunday, Mark was remembered as a lover of projects. It was not uncommon for him to have several going at any given time. Mark and Mindy built Tega Hills in the days before turnkey hydroponic systems and Mark was constantly working to maintain the system he built. He was also a passionate teacher, going back to his days running adventure programs for youth. He volunteered his time and knowledge to the Future Farmers of America chapter at his children’s high school, Nations Ford.

He deeply loved his wife Mindy and their three children: Sarah, Aaron, and Martha. He also loved growing incredibly spicy peppers that seed companies would send him to trial even though Mindy told him there wasn’t any room for them on the farm. They were special projects of his, and the seed companies knew it. It was not uncommon for random packets to show up in the mail, as the seed companies sought Mark’s opinion and expertise on varieties and flavor profiles.

Whether you ever met Mark or not, you likely experienced the fruits of his labor. With hundreds of local chefs in their customer portfolio, his farm’s lettuces, microgreens, and seasonal vegetables enter the back doors of Charlotte’s top restaurants each week. Many of their current chef customers are the same ones Mark himself delivered to so many years ago.

Mark’s kindness and generosity was known by many within the local farming and culinary communities. The wisdom and insight he shared with us in the early days of Freshlist’s journey helped clarify our own purpose and reason for existence. We wanted to serve good people like Mark and Mindy who were so steadfast in their commitment to hospitality and serving others.

When the news of Mark’s passing came, a few of Tega Hills’ longest-running chef customers — Gene Briggs, Bruce Moffett, Brittany Cochran, and Joe Kindred — answered the call to prepare the post-service meal for Mindy and her family, and honor the man who has contributed so much to this city’s local food community.

You can directly support the continued success of Tega Hills Farm by stopping by to say hello to Mindy at the Matthews Farmers’ Market. You can also purchase their lettuce and other seasonal vegetables through Freshlist or dine at one of the many restaurants that support them.

As you enjoy your next crisp, mixed greens salad at Legion Brewing or Stagioni, or find yourself appreciating the subtle nuanced flavor that microgreens add to a dish at Kindred, take a moment to remember Mark and the generational impact his legacy has made on our city’s flourishing local food community.

Disclosure: Instead of payment for writing this obituary, the Freshlist team asked funds be instead donated to The Bulb in honor of Mark.