Charlotte breweries take home 7 of the 13 N.C. medals in the GABF 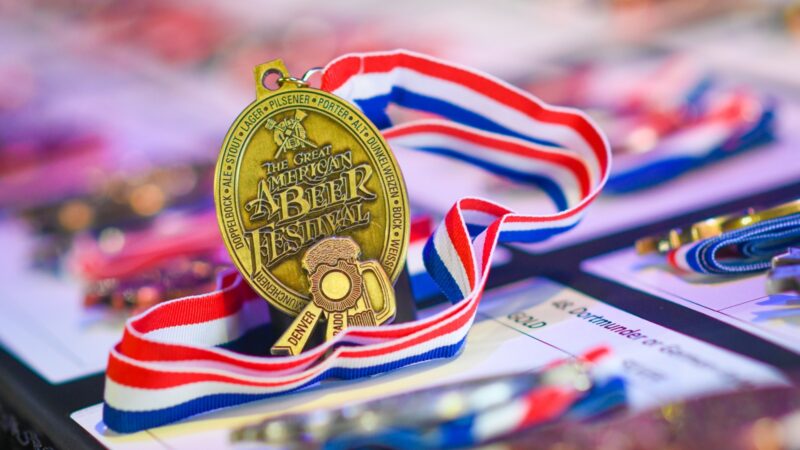 Charlotte brought home more medals than the rest of the state in the recent Great American Beer Festival. Photo courtesy

More than 40,000 beer lovers descended upon Denver, Colo. for the 40th anniversary of the Great American Beer Festival (GABF). The GABF is not only the largest beer festival in the U.S., but it also hosts the most prestigious American professional brewers competition. The competition this year featured 9,904 entries from 177 different beer styles and awarded 300 medals to 268 breweries.

Lots of numbers here, but the one most important to us in Charlotte: seven. Of the 13 medals awarded to North Carolina breweries, Charlotte earned bragging rights for winning seven of them — more than the entire rest of the state. (A full list of Charlotte winners is at the end of this article.)

Pilot Brewing won gold with their Blackberry Gose. Rachael Hudson, co-owner of Pilot, calls the beer a “happy accident.” She was aiming for a mimosa gose but felt the base beer would be better with blackberries. Not only did she win gold, but she also judged other beers — a first for her. Seeing firsthand the steps a beer must take to eventually win a medal brought further satisfaction to Pilot’s win and helped validate the strength of the beers made in Charlotte, she says.

Hudson felt the beer stood a chance of winning a medal but didn’t necessarily expect gold because there are so many great beers at the GABF. “It’s always cool to win,” she says. “This is our fourth medal – it’s rewarding but we also try not to get too hyped. It’s fun to sit at the award ceremony with the other Charlotte breweries and celebrate each other’s wins. Charlotte is turning itself into a destination spot for beer lovers. It’s always good when people around you are making good beer and winning as well.”

Jeremy Claeys, Director of Brewing Operations at Protagonist Beer, agrees. “This is a really cool moment for Charlotte,” he says. “Something I’ve really been high on is that I think we make some of the best beer in the country here in Charlotte. We have a world class beer scene and it’s exciting to see that many people win.”

For the second year in a row, Protagonist won GABF medals: gold for their Bizarro American/Belgian beer brewed with a saison yeast and dry hopped with American hops. They also won Silver for Franz, a German festbier. Claeys is especially proud of the silver because Franz is a malt-forward lager (lagers are typically more difficult to brew) and all the malt he uses is grown in the Southeast.

“Anytime you get a victory at GABF, you’re really happy because some people go their whole career without winning one,” Claeys says. “Kind of surreal honestly – 2 years in a row.  But it’s a huge moment for Charlotte. We should all be appreciative of what we have, because Asheville always steals the scene.”

Lenny Boy Brewing Co. was one of 18 first-time winners this year. They won gold for their Plumonary Groove, a fruited barrel-aged sour — a light lager base beer fermented in a Foeder on top of plums for about 8 months. It was then moved to a stainless steel tank for a few more months to gain complexity. They entered this beer because over time, the flavors melded very well and they felt like it was hitting on all cylinders.

Townes Mozer, founder of Lenny Boy Brewing, was mowing his grass during the awards ceremony and had no idea he had won until he saw “that my phone was blowing up” with congratulations from other Charlotte brewery owners.

“We’ve been working toward this since our beginning,” he says. “We’ve been brewing sours for 10-11 years and we’re super excited and proud of this beer. It solidifies from our peers that we’re making really good sours.”

His pride extends to the city as a whole, too.

“This is a huge boost as to what we’re doing as a city – it proves Charlotte is making really good beer,” Mozer says. “We’re excited about everybody that won and hopefully we’ll be back on top next year.”

All three owners/brewers agree that the medals don’t necessarily guarantee more people show up in the taproom, but what remains abundantly clear is that Charlotte has a phenomenal beer scene – second to none in our great state.