S.C. and N.C. pitmasters team up to cook Carolina-style barbecue for a cause 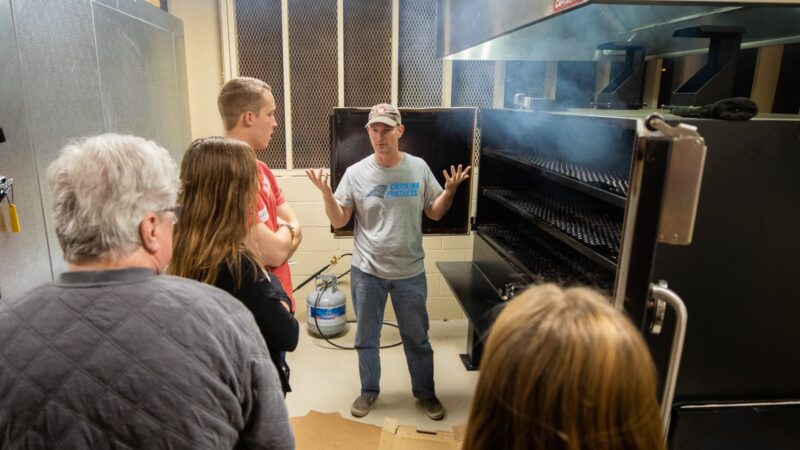 This May, a new barbecue festival will take place in Charlotte: the Carolina BBQ Festival. Lewis Donald of Sweet Lew’s BBQ, the festival’s founder, hopes to bring a barbecue tradition back to the forefront: cooking in community.

As both an attendee and participant in several festivals like the franchised Blues, Brews & BBQ, he noticed something missing. “The camaraderie,” Donald says. “Barbecue has become so trendy, we forget what it’s really about: fun, music, drinking bourbon, and cooking meat — while learning from each other.”

Most cooks at these festivals operate separately, but not at the barbecue festival Donald envisions. This year’s Carolina BBQ Festival is the inaugural event. Donald has formed strategic partnerships to foster relationships between cooks, where one pitmaster will prepare the meat and the other will be on sides duty. Together, they will celebrate the spirit of Carolina-style whole hog barbecue (from both North and South Carolina) right along with festival goers. Ticket holders will be able to sample each pair’s unique plate of smoked meat and two sides plus a 10 ounce beer pairing from Free Range Brewing. “Partnering with Free Range was a no-brainer,” Donald says. “They are a brewery from the Eastern part of North Carolina. Backyard barbecue and beer — They’re all about it.” The three tents will represent the holy trinity of Carolina barbecue flavors: tomato, vinegar, and mustard.

On Sunday, May 22 from 12-4 pm in the Boileryard at Camp North End, guests will catch these duos in action:

Additionally, Donald and Garren Kirkman of Jon G’s Barbecue will work together to prepare a special pre-festival meal for VIP ticket holders, one hour prior to festival start. The menu will feature fresh oysters, shucked by Oyster South’s farmers and served raw, as well as barbecue-inspired brunch fare and a Bloody Mary bar.“I feel the world of barbecue festivals has gotten away from just having a good time,” Donald says. That’s why he considered cooking pairs carefully. “I thought about who hasn’t worked together before, who could learn from each other. Who are they? What do they do? What is their prior relationship?” For instance, he explains that Furman has been long recognized for his whole hog and South Carolina sides approach. Why not let him cook with Nelson, whom Donald feels deserves more exposure and press for the great work he does in this area, too? Then, there’s Moss, also known for his whole hog method yet differently from Furman. He and Register both hail from the coast and like to work together. Lastly, Monk is third-generation Lexington barbecue lineage while Shepard describes his style as respecting technique while being less conventional.

When Donald first contemplated a festival like this, he discussed his ideas with veteran Charlotte restaurateur Frank Scibelli, whose concepts include Midwood Smokehouse. Scibelli called him an “old soul.” For a long time, Donald had felt Charlotte needed a simple, back-to-basics pig pickin’. The pandemic gave him the time needed to examine the festival culture he wanted to create — something akin to New Orleans’ Hogs for the Cause, Charleston’s Holy Smokes, and St. Simons Island’s Southern Soul and Firebox. Donald met up with Let’s Meet CLT, and they blueprinted everything the first week of January.

The focus on community will extend well beyond the pit at Carolina BBQ Festival; it is primarily a fundraising event for Piedmont Culinary Guild, Operation BBQ Relief, and World Central Kitchen. “The charitable giving is the basis for the whole thing,” Donald says. “This festival is about the love of barbecue and the love of community.”

Get on the ticket waitlist and find full details at carolinabbqfest.org.