A quick conversation with the chef of The Goodyear House 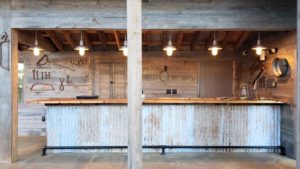 The outdoor bar at The Goodyear House. Kristen Wile/UP

We’ve already written about the story behind upcoming NoDa restaurant The Goodyear House. Now that the opening is just around the corner, we caught up with the restaurant’s executive chef, Chris Coleman, to get a quick update on what to expect. Want to experience it for yourself? Tickets will go on sale on Wednesday, Jan. 22 for subscribers to join us at The Goodyear House for an Unpretentious Preview of the restaurant on Monday, February 3. Subscribe today for your chance to get tickets. —Kristen Wile

Unpretentious Palate: How do you describe the cuisine of The Goodyear House?
Chris Coleman: We are offering simple plates with complex flavors. It’s very rooted in the South, but with global influences — so very much a continuation of what I was doing at Stoke, but a bit more relaxed, a bit more comfortable, because I think I’m a bit more relaxed and more comfortable than I was with Marriott. Honestly, we’re just trying to buy the best ingredients we can and to make super tasty, delicious food that we want to eat every day.

UP: What made you want to become the executive chef at The Goodyear House?
CC: The restaurant itself is a very cool idea. I’ve never heard of a restaurant that is going to try to pull off what [owner] A.J. envisioned with the different rooms, that have a different feel, in an old house. The first time that I heard about it two years ago, it sounded very disjointed — but to see how it has come together is really cool.

The management team is fantastic. I think myself, A.J., and Sean Potter make up a pretty great trio of partners, and I think I’m able to finally do exactly what I want to do. The other two restaurants that I’ve opened, The Asbury and Stoke, were a ton of me, but this is 100 percent me. And that’s going to liberating.

UP: Charlotte tends to have a disjointed culinary identity, but lately there have been more restaurants opening that seem to be creating a signature local cuisine. What do you hope Goodyear House will add to move the city forward?
CC: What I hope to achieve is showing people that you can create very thought-out, complex plates but in a super casual, comfortable way. You know, we’ve got some great chefs in town, we’ve got some great restaurants in town doing some really cool food. But I feel like sometimes there’s a bit of a gap in the market for a neighborhood spot that is trying to attract people on a Tuesday night, just when they got home from work and they’re too tired to cook — that kind of chef-driven cuisine. There’s been a gap there, between the neighborhood spots and chef-driven spots. We hope to be right there in the middle of that gap.

UP: You seem to be very proactive in trying to advocate for healthier kitchens and more balanced work life for staff. Is there anything cool you’re doing for your staff?
CC: It’s no secret that I’m kind of a family man. I love spending time with my wife and my kids and I try to make them as big a part of my life as possible. I was able to do that somewhat at Marriott, but much to the detriment of some other people that work there. It seemed a little unfair to me that the chef could kind of come and go as he pleased while everyone else was working their fingers to the bones. So it’s really important for us to set up from the beginning that we want to create a culture in the kitchen and outside of the kitchen where the people that work with us are just as important, if not more important, than the guests.

That means structured weeks with a guarantee of two days off in a row —kind of a weekend, which is unheard of in a lot of kitchens. We are trying to work out a detail with the YMCA across the street from us where we could get some gym memberships or YMCA memberships for folks who work with us at a discounted rate that we will pay for, so that our employees, the people that we work with every day, can take care of themselves and hopefully better themselves. We just wanted to create a space where everyone feels that their voice is being heard, that their efforts and their time are being honored, both monetarily and not monetarily, and where people just want to work. Happy cooks, happy servers, heavy bartenders, happy bussers will be able to produce a happier dining experience for our guests. So it all comes back around.

UP: Bonus question: What is one thing that I didn’t ask you that you wish I had? Something you want people to know?
CC: There are a lot of things that we’ve talked about doing that we haven’t really gotten plans nailed down yet. We’ve got a great outdoor patio space we call the backyard, so we’re planning a series of kind of backyard barbecues with different guest chefs. We are doing a cool drinking vinegar program at our bar where we’re taking different vinegars, using them ourselves as the bases of a lot of our cocktails to play off the popularity of shrubs and kombucha. It’s something that we can do ourselves that is very old-fashioned, and drinking vinegars were kind of the thing in the early 1900s when the house was built. We’ve got a lot of really fun ideas that we’re hoping to flush out after we get open. And you know, this is a restaurant that’s going to evolve — just like the idea of a good year house, of a house that evolved with the family.