The best home of Lowcountry eats in Charlotte

A warm and sweet winter vinaigrette for salads, sandwiches, and marinades

I try to utilize the last drops of ingredients I have in the house before restocking. It’s usually not enough for a full meal, so I make spice blends or vinaigrettes to use later in the week. During the winter, typically after the holidays when I have overstocked the pantry for the marathon of cooking, I always seem to have a few cups of apple cider, half a shallot, and a bottle or two of maple syrup with barely any syrup at the bottom. My go-to for the last couple of years has been to make this vinaigrette, inspired by something I tasted once at a friend’s house. She served it warm over a cold roasted vegetable salad and I fell in love with it. It’s tangy and sweet but also warm with a mellow spice to it. It is simple to make and stores well in the refrigerator for up to a week. If you want it warm, just reheat in a small saucepan and whisk and toss into a salad or serve as a dipping sauce (I typically do this when serving ham delights), or shake it up when cold and use it as a marinade for chicken, pork, or shrimp. While winter can seem like a bleak season for cooking, this recipe adds seasonally appropriate flavor to meals during the colder months. 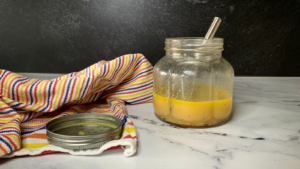 Warm and sweet, apple cider and maple vinaigrette is great for salads, sandwiches, and marinades during the winter months. Justin Burke/UP