Food vibrant in spice and flavor inside of a bland building

The restaurant will open Feb. 4 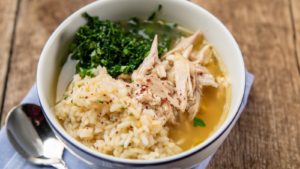 Guinea hen stew, which Coleman says is an upgrade on the chicken and rice his mom cooked when he was a kid. Photo by Peter Taylor

After lengthy construction delays, The Goodyear House is ready to open in NoDa. The restaurant, inside of a historic mill home, will begin service on Tuesday, Feb. 4 at 7:30 p.m.

The concept of The Goodyear House centers around the idea that as working families saved enough extra income — after a good year — they would add a room onto their homes. The Goodyear House’s main dining room is in the original part of the home, built in the early 1900s, and an addition to the building creates two more dining areas. Each dining room has its own personality.

On executive chef Chris Coleman’s menu are simple Southern dishes but with complex flavors, including vegetarian and vegan offerings. Coleman says the menu is an evolution of where he is in his life and career.

“I just want to have places to relax, I just want places to have fun,” he says. “I’m not trying to show off anymore. I just want to make really, really good food, super tasty, that still supports all of my friends and farms and stuff that I’ve come to love, but it’s fun.”

We’ll be hosting an Unpretentious Preview of The Goodyear House on Feb. 3, the night before it opens to the public. If you were one of the lucky subscribers to get tickets to the sell-out event, we’ll see you there. Otherwise, stay tuned for photos from the event.