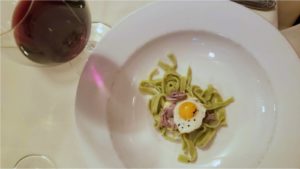 The Fig Tree in Elizabeth is among the restaurants honored by Wine Spectator magazine. Kristen Wile/UP

North Carolina has one Grand Award Winner: Angus Barn in Raleigh. Several restaurants ranked in the other two categories, however. In order to be considered, restaurants must submit a cover letter, dinner menu, wine list, and application fee, then are judged on selection, pricing, and presentation. Here’s which restaurants topped the list among Charlotte contenders this year with Best of Award of Excellence recognition:

The Fig Tree, Elizabeth
This Charlotte classic restaurant is owned by Greg and Sara Zanitsch, who are both extremely knowledgeable about wine. Not only is the wine list among the best in town, but the staff is able to recommend the right bottle for any palate.

BLT Steak, Uptown
Named BLT in honor of Laurent Tourondel (as in Bistro Laurent Tourondel), this restaurant in The Ritz oozes sophistication, from its high-end steakhouse menu to its selection of wines. Though Tourondel is no longer part of the ownership group, the tradition of fine dining he inspired continues.

Ruth’s Chris, multiple locations
Both Charlotte locations of the dependable, upscale steakhouse made the list. The Uptown location has done so since 2008, and the SouthPark location made its debut on the list in 2018.

Barcelona Wine Bar, South End
With nearly 400 wines available by the bottle and wine bar in the title, this restaurant under the Del Frisco’s ownership group makes its first appearance on the Wine Spectator list this year after opening in 2019.

Find the full list here. If you’re looking for a reservation with wine in mind, you can use our Restaurant Finder’s “Good For” drop-down to select places made for wine lovers. —Kristen Wile