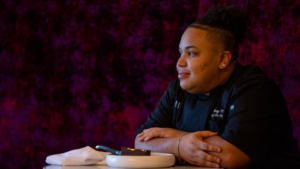 Editor’s update: While Thomas did not beat Monsour to advance and cook against Flay, her shrimp over polenta with ‘nduja gravy impressed the judges, as did her techniques. “Whitney is tasting and tasting,” Geoffrey Zakarian said. “That’s a sign of a great chef.” While her shrimp was cooked perfectly, the chefs believed her dish needed an element to add brightness.

Grand Bohemian Hotel Charlotte chef de cuisine Whitney Thomas will appear on Food Network this week. Thomas will compete on Beat Bobby Flay, a longstanding cooking competition on Food Network where two chefs compete head on for a chance to cook against chef Bobby Flay with their signature dish.

“It was definitely a wild experience, thinking on your feet times 10,” Thomas says. “It was my first time on TV but I’ve got the itch and I’m ready to do it again!”

For the chance to compete against Flay, Thomas must first beat chef Sammy Monsour of Los Angeles in a mystery ingredient challenge picked by Bobby Flay. Thomas joins the growing number of Charlotte chefs that have competed on Food Network the past year.